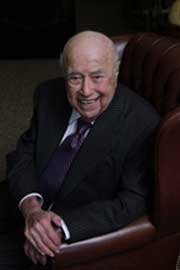 Bernard Roth, a Los Angeles oil magnate and pioneer of the self-serve gas station, passed away on Sunday at his home in Beverly Hills, it was announced Tuesday. He was 95.

Roth entered the gas station business in 1938 with the purchase of a single station at the corner of Florence and Normandie avenues in South Central Los Angeles. His innovation was the self-service model, where he could save on labor costs, accommodate higher customer volumes and pass on savings to the motorist in the form of discount prices at the pump.

However, the major oil retailers fought the self-serve concept, and it wasn’t until the twin oil price shocks of the 1970s that the self-serve model spread throughout the industry.

Roth formed World Oil Co. in 1940 as a distributor of high-quality gasoline at discount prices. Today, World Oil and its affiliates operate gas stations throughout the state and have diversified into asphalt production, oil recycling, trucking, marine terminal operations and real estate development.

“Bernie was a true giant and innovator in the retail gasoline business,” said George Babikian, former president of ARCO Products Co. “He transformed the traditional corner service station into one of the most powerful business models in the nation.”

Roth was active in civic and philanthropic circles. With his wife of 74 years, Florence, he created the Florence and Bernard B. Roth Family Foundation, which has contributed to the Los Angeles County Museum of Art, Cedars-Sinai Medical Center and Wilshire Boulevard Temple. Roth also served on the board at Wilshire Boulevard Temple. And he devoted time serving the underprivileged in Compton, helping set up or expand Little League Baseball, the Sports Foundation, Meals on Wheels and the AIDS Hotline.

Roth is survived by his wife and three sons: Richard Roth of New York, and Robert and Steven Roth of Los Angeles. He is also survived by six grandchildren and six great-grandchildren.

Funeral services are set for 11 a.m. Wednesday at Wilshire Boulevard Temple, 3663 Wilshire Blvd. In lieu of flowers, the family is asking that donations be made to the temple or to the Los Angeles Jewish Home for the Aging.