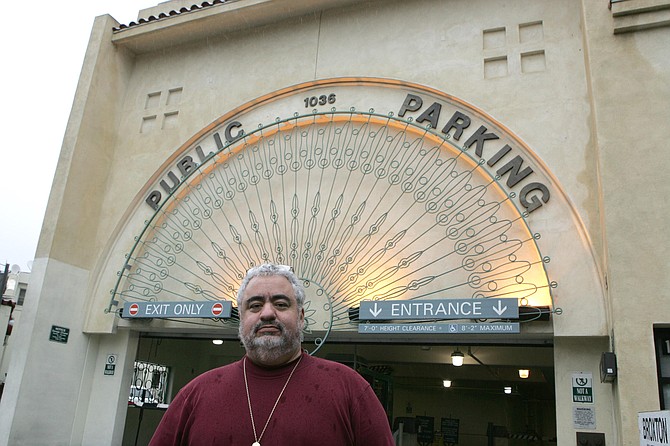 David Friedman at the Broxton garage in Westwood. Photo by Ringo Chiu.

Businesses in Hollywood and Westwood are trying to put the brakes on Mayor Antonio Villaraigosa’s proposal to lease out city parking garages.

The opposition is driven by fear that private-sector operators would have to dramatically increase parking rates, driving away customers. They’re calling for the city to scrap the plans, or at least limit the rates that any new operators could charge.

“This would be an obstacle to attracting new customers and we could lose some of our existing customers,” said David Friedman, owner of Sarah Leonard Fine Jewelers in Westwood Village. Friedman, whose family has run the store since 1947, has set aside expansion plans because of the mayor’s proposal.

Tej Sundher, one of the owners of the Hollywood Wax Museum and the Hollywood Guinness World of Records Museum, is also concerned. Sundher said most of his customers come by car and he would lose their business if parking became too expensive.

“This would be one of the most negative impactful things for us since the 9/11 terrorist attacks,” he said. “People aren’t going to pay $10 or more to park and walk over to our museums.”

The mayor’s plan, which could be voted on as early as this week, calls for the city to lease out nine city-owned parking garages for 50 years to a business or a consortium. The city would get an up-front payment of $53 million for the lease, which includes three garages in Hollywood and one in Westwood. The $53 million would go to plugging the city’s massive budget hole; the money already has been counted in the city’s 2010-11 general fund. If the plan fails, cuts would have to be made in city services or staffing levels to make up the difference.

Meanwhile, the Westwood garage would lose its current free-parking status and could raise rates as high as $5 for short-term parking in phases during the next five years.

For the following 45 years, the parking rates would be indexed to inflation. What’s more, the city would be barred from building parking structures within one-eighth of a mile of these garages for that period.

Besides Hollywood and Westwood, parking garages in Sherman Oaks, Studio City and elsewhere are slated to be leased, but the projected price increases for those garages are not as great because demand in those areas isn’t as high.

The proposal was scheduled for consideration before the City Council last month and was initially set for adoption before the holiday recess. But city administrators delayed the matter after a contentious public hearing and it’s now set to return to the council this month, perhaps this week.

If the council approves the plan, administrators would call for bids from private operators and a lease could be signed by midyear.

City administrators said a private operator could increase automation of the garages to save on labor costs and market them more effectively. If the operator overcharged, the garages wouldn’t get as much business.

“No parking lot operator is going to charge rates that leave the lots half-empty,” said Miguel Santana, city administrative officer. “They will charge rates that keep the garages competitive with surrounding parking lots and find other ways to recoup their investment.”

But merchants and business owners believe a private-sector operator would have to raise rates substantially in order to recoup the up-front investment, even if it means a few parking spaces sit vacant.

Furthermore, they said more shoppers come to their areas because the city-owned garages in Westwood and Hollywood charge significantly lower rates than surrounding lots. The low parking prices also keep rates at the other lots in check.

Some business leaders and owners said they want the city to drop the leasing plan altogether; failing that, they want lower maximum parking rates written into the deal. They are petitioning council members and the Mayor’s Office, meeting privately with council members and researching avenues for legal challenges should the plan pass.

“Hollywood needs more affordable parking lots like Hollywood & Highland and the ArcLight Cinemas, not taking away the existing ones,” said Kerry Morrison, executive director of the Hollywood Property Owners Alliance and chief administrator of the Sunset and Hollywood business improvement districts. “Otherwise, the revitalization that we’ve worked so long and hard for could falter as people go to other areas to shop.”

Another Hollywood opponent of the plan is Mann Theatres Chief Executive Peter Dobson, who runs the famous Mann’s Chinese Theatre as well as the six-screen multiplex at the Hollywood & Highland shopping center.

“I understand the need for prices at these lots to go up a bit, but what they are proposing is simply too high,” he said.

Dobson said that besides losing some casual film patrons, the much coveted Hollywood movie premieres could suffer. While 10 percent or 20 percent of the patrons arriving at the screenings may be celebrities arriving in limousines, the rest are everyday folk who come in by car.

The deal also allows the private operator of the Hollywood & Highland lot to charge up to $30 for special events, such as movie premiers and awards shows at the Kodak Theatre.

Hollywood Chamber of Commerce Chief Executive Leron Gubler wrote in a Business Journal op-ed last month that parking rates as high as $30 for the coming Cirque du Soleil at Kodak Theatre could keep audiences away.

Gubler and other Hollywood chamber leaders late last month sent an e-mail to Hollywood businesses urging them to sign a petition demanding that the council reject the lease plan.

Merchants in Westwood Village fought for 15 years to get a city-owned lot built that would have free parking for at least two hours. They had watched many of their customers desert their stores for free parking at other Westside shopping destinations, including Westside Pavilion, Century City and Santa Monica’s Third Street Promenade.

In 1997, the city opened the parking garage on Broxton Avenue. Business at nearby stores, including Sara Leonard Fine Jewelers, immediately ticked up.

“The free parking at that structure was fabulous for our business and for all the businesses along Westwood Boulevard,” owner Friedman said.

Business was good enough that Friedman was planning to expand his store when his lease was due expire at the end of last year. Instead, when he learned of the plan to lease out the Broxton garage, he set aside the expansion and signed a three-year lease extension.

“We just don’t know how much of a negative impact this will be for our customer base,” he said, “so we couldn’t guarantee the income flow to justify the expansion.”

Another longtime Westwood business owner said he’s already had customers tell him that if free parking at the Broxton lot were eliminated, they would find someplace else to go.

Clinton Schudy owns Oakly’s Barber Shop, which opened in 1929 as one of the first businesses in Westwood Village. Schudy said parking has been a longtime challenge in the area.

“I’ve already had some people who drive in who have said they will not come to the village if this parking lot is no longer free,” he said.

City administrative officer Santana said city officials were aware of the situation in Westwood and, for that reason, have amended their proposal to keep free parking at the Broxton garage for the first two years.

“Look, we’re talking about eliminating free parking in Westwood for the next 50 years while all the nearby Westside shopping areas get to keep their free parking,” said Steve Sann, chairman of the Westwood Village Business Association and the Westwood Community Council. “This is going to hurt the viability of businesses in Westwood for years to come, and it’s all for just one year’s budget gain.”