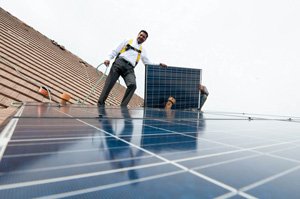 After years of government subsidies that convinced only a few people to switch to sun power, can a private financing model for solar-panel roof systems work?

One local company is betting the answer is yes. American Solar Direct Inc., a two-year-old company in Santa Monica, received a $50 million investment from an East Coast utility holding company late last year and has since gone on a growth spree, adding more than 100 employees and opening offices across Los Angeles County as it tries to sell solar systems to hundreds of homeowners and eventually small-business customers.

American Solar Direct is one of a new generation of solar companies that use a lease-financing model to make solar roof installations affordable for homeowners. Instead of the homeowner paying, say, a $25,000 installation cost up front – offset by a hefty dose of government subsidies – the lease-financing model allows the homeowner to pay for the solar system like a car or a house.

On a $25,000 system, the typical lease runs 20 years and the monthly payments come to about $170 after rebates and tax credits. (The payments include periodic service visits, and repair or replacement costs covered by warranty.)

By making solar affordable, the thinking goes, more homeowners will buy. And the long-term, monthly lease payments give the investors a better-than-average return. As a result, in the past year, major installers such as SolarCity of Menlo Park and SunRun Inc. of San Francisco have received investments or loans from the likes of Google Inc., Bank of America, Citigroup and U.S. Bancorp.

But American Solar Direct’s case is a different twist on that model, because it’s one of the first instances of a utility investing in a solar company. American Solar Direct received its outside investment from WGL Holdings, the parent company of Washington Gas & Light, which serves the Washington, D.C., area.

“Most of the financing previously had come from banks or Google or anyone seeking to reduce tax liability with investments in alternative energy,” said Ravi Thuraisingham, president and chief financial officer for American Solar Direct. “Now, utilities are starting to get into this business; they are interested in the long-term aspect of solar for their own customers.”

Indeed, in making the investment last year, WGL Chief Executive Terry McCallister cited California’s leadership position in solar energy as a key reason for the company’s investment. It gives his company experience in the solar market.

“California is one of the most attractive geographic regions for the residential solar market,” McCallister said. “Gaining a foothold in this developing market is an important step in the pursuit of our vision of providing clean and efficient energy solutions to our customers.”

Solar energy has been a tough sell until recently. But the spread of the lease-finance model has helped change this.

“Solar leasing is a fantastic idea for consumers,” said Pavel Molchanov, an analyst with Raymond James & Associates Inc. of St. Petersburg, Fla. “It allows them to get the benefits of solar without paying capital costs of $20,000 to $25,000 up front.”

Another big change, Molchanov said, is that the cost of solar panels and complete photovoltaic systems has plummeted – as much as 45 percent – in the last 18 months and the economics make more sense now. For an average residential system, solar panels cost about $10,000, down from $18,000 to $19,000 two years ago. (The solar panels make up roughly half the cost of a typical installation.)

Also, he said, low interest rates and bond yields have prompted companies with a lot of cash, such as Google, to search for investments that yield consistent return. Rates of return on residential solar systems vary, but are generally around 10 percent. By comparison, Treasury bills today yield 1 percent or so.

Homeowners can still get federal tax credits and local utility rebates. Southern California Edison offers rebates totaling about $3,000 for a $25,000 system, Thuraisingham said. Add an $8,000 federal tax credit and the total financing cost is reduced by about $11,000. Without the rebates and tax credits, the monthly lease payment a homeowner makes would likely shoot up from $170 to more than $200.

The Los Angeles Department of Water & Power’s rebates have been significantly more generous: about $9,000 for a $25,000 solar system. Because this rebate was so high, the federal tax credit amount is significantly smaller for systems in DWP territory.

However, those tax credits and rebates are being scaled back. Two months ago, the DWP reduced its rebates, saying the price of solar panels had fallen so much that the rebates were no longer necessary.

There’s also concern about the scandal surrounding the $528 million federal loan to Solyndra LLC, a Fremont solar panel manufacturer that filed for Chapter 11 bankruptcy Sept. 1. Congress may pull the plug on federal solar rebate programs because the controversy has tainted the entire industry.

Unlike most other solar installers that draw in residential customers through advertising, American Solar Direct uses a direct-marketing approach, having sales people go door-to-door to sign up customers.

Thuraisingham said that he and his business partner, American Solar Chief Executive Brennan Mulcahy, had previously teamed up on a venture in Canada that used door-to-door marketing to sell electricity and natural gas to customers.

“We built that business going door to door and found that to be the most effective way to reach middle-tier homeowners,” he said.

As of last month, the company had signed up 700 residential customers in Southern California and installed about 400 systems in those homes.

Thuraisingham said the company plans to start targeting small businesses and warehouses by the middle of next year.

So far, the door-to-door sales approach is largely unproven in the solar roof installation industry. The approach could be challenging for a long-term investment such as solar panels.

“It does seem a bit unique,” said Eric Wesoff, editor and solar analyst for Greentech Media News, an online industry newsletter. “This is a major commitment for the homeowner.”

Wesoff was more sanguine about the leasing model and its ability to attract outside investors because the payout is higher than elsewhere in today’s low-interest environment.

“Residential solar is now an emerging asset class,” he said. “The price of money has gotten better and so has the price of the solar panels.”