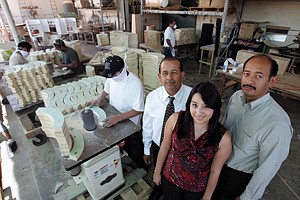 One year ago, Celco Manufacturing, an East L.A. company that makes shelving and cases for retail displays, was in trouble. With its customers disappearing or scaling back because of the recession, sales had plunged 40 percent in three years and the owners were having trouble paying their bills – and sometimes even their workers.

Enter Xochitl Cortez, daughter of one of the eight brothers who founded Celco in the 1990s. Although she had wanted to start her own business, she had been helping out at the company while taking undergraduate business classes at USC’s Marshall School of Business.

Xochitl (pronounced Sho-Shi) Cortez, 21, made Celco Manufacturing a case study in her entrepreneur classes. The assignment: come up with steps to turn the company around.

“Celco was definitely struggling,” Cortez said. “It was consistently in the red and it was getting more difficult to meet payroll.”

Late last year, the brothers were considering taking out second mortgages on their homes in a last-ditch attempt to keep the company afloat.

Cortez and her academic adviser at Marshall came up with a three-pronged turnaround strategy: get more customers from industries Celco already has clients in, cut overhead costs further and improve bill collections.

Nearly one year later, Celco has brought in 15 new customers and its revenues are on track to increase 40 percent.

But it hasn’t been easy. To make the changes, Cortez, now a law student, had to convince her father and uncles to overcome years of tradition and inertia at the company. At times, she even had to go against her father’s wishes.

Celco started in 1994 when the eight Cortez brothers – who range in age from 34 to 52, and immigrated to the U.S. from Mexico in the mid-1970s – decided to leave a Vernon display furniture manufacturing company where they all worked to start their own firm. They used their contacts in the industry to build a customer base. About half the customers were in the retail industry, including Nabisco, the Kraft Foods cookie and cracker subsidiary. The other half were display furniture manufacturers for which Celco made component parts, such as shelves and case legs.

The company grew steadily through 2006, when revenue topped $3 million. Then trouble hit. First, amid the real estate collapse, Celco lost a major customer that sold accessories to homebuilder companies. Then other customers scaled back their orders or went into bankruptcy. By last year, revenue had plunged to about $1.8 million, nearly half of the company’s 35 workers had been laid off, and it didn’t look like things were going to get any better anytime soon.

That’s when Xochitl Cortez decided to make Celco her class project. As the daughter of founding brother Manuel Cortez, she had already been working part-time in Celco’s collection department.

At first, she did what many business owners or executives do: She looked for new markets. But her Marshall adviser, assistant professor Patrick Henry, said this was the wrong approach. The company shouldn’t look at making different kinds of furniture for customers in other industries.

“Going into new markets didn’t seem to make a lot of sense as a first step,” Henry told the Business Journal. “There’s a huge learning curve and it takes time to develop contacts.”

Instead, Henry advised her to look more closely at the display furniture industry, starting with asking existing customers if they had other projects Celco could work on.

The next step, he said, was to “understand who your customers are and find more like them.” Henry advised her to target companies that were higher up that supply chain, like furniture design companies.

“Cesar cold-called me one day, showing up at my office following a visit to a nearby trade show,” said Eric Weintraub, operations manager for Design Boys. “Normally, someone trying to cold-call me wouldn’t get the time of day, but timing is everything. It so happened that we had projects available that fit his business.”

Weintraub said he was impressed with Celco’s turnaround time, its competitive pricing and the quality of the work. Since that initial job, the company has worked on five more projects for Design Boys.

Meanwhile, Xochitl Cortez also had to build Celco’s web presence. But her father, the company’s bookkeeper, objected, saying it would cost too much money.

“I went around my father – to my uncle Cesar,” she admitted. Once the website was up and running, her father had come around and supported the effort.

The result of all these efforts: 15 new customers in the last 10 months. About half of them are furniture design companies.

Cortez worked with her father to reduce expenses through condensing the workweek. She also started playing hardball on the collections front.

“Unless the customer would come in with a check, we would not deliver the product,” she said.

Some customers threatened to stop doing business with them, but she said no one followed through.

Celco is on track to realize about $2.6 million in revenue this year at a time when some competitors have gone out of business. Nevertheless, the company is still well below its 2006 sales peak of $3.1 million.

Eventually, Cesar Cortez said, Celco will focus more on new markets. The company has already made a tentative step in that direction with one new customer that designs office furniture.

“We need to keep acquiring new customers,” he said.

CORE BUSINESS: Makes shelving and cases for retail displays, along with some other furniture.

GOAL: To sign up new customers and, eventually, expand into other industries.