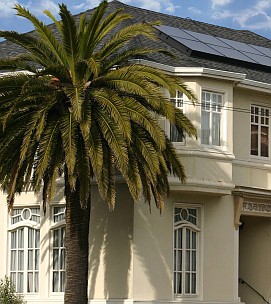 A solar panel installed on a Los Angeles home. Photo by Courtesy Photo

Solar companies are feeling burned over a Los Angeles Department of Water & Power proposal to sharply reduce rebates to homeowners and businesses for installing solar panels on their roofs.

The city’s power agency claims the rebate program has exceeded its $33 million annual budget for this year and next, and also notes that the cost of solar panels has dropped sharply. As a result, the DWP is proposing a 30 percent cut in rebates to residential and small business customers for solar panel installation.

But installers say such an abrupt cut in the rebates would drive away customers and devastate their business.

Ken Button, president of Verengo Solar Plus, an Orange-based solar roof panel installer that does about 40 percent of its business in Los Angeles, said that the DWP proposal would add about $4,000 in up-front, out-of-pocket costs for a typical homeowner. He estimated the proposal would cost small businesses up to $40,000 more in up-front costs. Small business systems are typically larger than single-family residential solar systems.

“That’s a really dramatic change that will make solar roofs uneconomic in the city and will put the brakes on this program,” he said.

If approved by the DWP board next month, the rebate reductions would take effect immediately.

The rebates are calculated based on how much power the solar panels will generate. The cost of adding solar panels to a home or small business ranges widely; a system on a small single-family home could cost as little as $10,000, and a larger system on a small business could cost up to $100,000. Other local utilities also offer solar rebates. Southern California Edison’s solar rebates are now about half of the DWP’s rebates.

Button said the DWP cuts would likely mean the company would have to lay off many of its 150 employees.

The proposed cut in the solar rebates would put a crimp in expansion plans at Constant Solar Power in Mar Vista.

Chief executive Robert Constant said that in response to brisk business, he hired a foreman last month and planned to add four workers to the current 14.

“But if they pass these rebate cuts, demand is going to fall and we probably won’t go through with our plans to hire that extra crew,” he said.

Constant said that if the economy improves, that would help counteract the rebate cuts.

“We would still try to convince people that going solar is a good investment, but it would be harder,” he said.

If DWP scales back its rebates, he said he’ll search for additional work in Southern California Edison territory.

San Francisco-based Sun Run Inc. said the DWP proposal would no longer be able to lease solar systems to homeowners at minimal up-front costs in the city.

Sun Run now charges its customers an up-front payment of $1,000 followed by monthly lease payments. But if the DWP proposal takes effect, the company said it would raise that charge to $5,000.

“The whole point of charging just $1,000 up front is to make solar power systems affordable for the average homeowner,” said Ethan Sprague, director of government affairs for Sun Run. “Lower the incentives and we’ll be forced to charge about $5,000 for that up-front payment, which completely cuts into our business model.”

About half of all L.A.’s solar roof installations by all companies were done with the lease payment model, Sprague said. A lease typically runs about 20 years; at the end of the lease the customer may buy the solar power system, sign a new contract or have the solar panels removed.

Sprague and Button say they want the DWP to reconsider the rebate cuts. But DWP officials don’t believe that lowering the customer rebates will destroy the residential solar roof market. They note that prices for solar photovoltaic panels have plunged as much as 40 percent in the past 18 months or so, thanks to a huge influx of lower-cost solar panels made in China. That drop in prices has led to cost savings that have gone to the bottom lines of solar roof installers.

The combination of this federal tax credit and the DWP rebates has given a major boost to the local solar market. Since the DWP rebate program began four years ago, about 2,300 residential and small business customers have installed solar photovoltaic panels on their roofs, with the vast majority of those taking place in the last two years.

“After a slow start, this program is going at a faster pace than we anticipated,” said Lorraine Paskett, senior assistant general manager of sustainability programs.

Paskett said that there was little initial response to the rebate program, so in 2007, the agency boosted the rebate amounts. Since then, so many applications have come in for rebates that the agency would have to pay out $70 million in rebates if all were completely paid, more than twice the $33 million annual budget for the program.

To meet the demand without adjusting the rebate amounts, Paskett said the agency would have to take money away from other solar investments, including a large solar power project proposed in the Owens Valley.

“We want to keep our solar investments going, but we must also be prudent on behalf of our customers,” Paskett said.

Nonetheless, DWP officials say they are willing to listen to the concerns of solar installers and have scheduled a workshop to discuss the rebate cuts later this month.

“We do care about solar investment,” Paskett said. “But the market has matured and we should reshape our program to reflect that. We think that even with the reduced rebates, there will be customers willing to spend money on solar power.”

For their part, the installers say they want to work with the DWP to come up with a solution that won’t burn out their business.

“Let’s find out if there’s another way we can address this that doesn’t devastate the industry,” Button said.