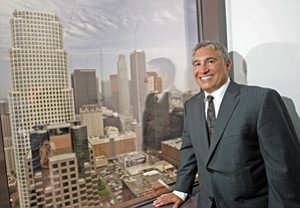 Faced with worsening budget crunches, cities in Los Angeles County are trying to extract more fees and taxes out of businesses, making the region an even more expensive place to do business.

As a result, this year only three cities – Agoura Hills, Glendora and Westlake Village – were placed in the lowest and best category for the cost of doing business, down from six in 2009 and seven in 2008, according to an annual survey compiled by Kosmont Cos. and the Rose Institute of State and Local Government at Claremont McKenna College.

What’s more, the number of high-cost cities in the county has increased to 41 in 2010 from 37 in 2008. Three cities – Culver City, Los Angeles and Santa Monica – are among the 20 most expensive cities to do business nationwide.

Kosmont’s annual rankings, released Saturday but previewed by the Business Journal last week, are based on the amount of taxes and fees charged to businesses. Included in the calculations are property, utility and sales taxes, and business license fees.

“The cost of doing business is going up at cities throughout Los Angeles County,” said Larry Kosmont, chief executive of Kosmont Cos. “With falling revenues, state raids on their budgets and the costs for bloated pensions coming home to roost, cities have nowhere else to turn, so they are hitting up businesses.”

Cities have increased sales, business license and hotel bed taxes, and a host of fees on business. At least one of the county’s 88 cities seeks voter approval for raising one tax or another on business in almost every election.

This November, voters in El Segundo will get their say on whether to raise utility taxes paid by businesses by 1 percentage point, while voters in Santa Fe Springs will vote on whether to impose a 5 percent utility users tax on both residents and businesses.

Several county cities have also raised sales taxes in recent years, including Pico Rivera and South Gate, which now have sales tax rates near 11 percent, among the highest in the nation.

“Sales taxes are a double hit for businesses,” Kosmont said. “First, they hit customers, who then have less disposable income and buy fewer things. Then they also hit the bottom lines of businesses.”

Kosmont said that over the next couple of years, the pressure to raise taxes and fees on businesses will grow more intense, especially as ballooning pension costs and state raids on local redevelopment funds take their toll. Voters often reject general tax or fee increases, so cities take the path of least resistance by increasing taxes or fees on businesses.

“I expect we will see cities in L.A. County continue to move up the cost spectrum, especially over the next couple years,” he said.

While the economic impact of the recession is widespread, cities in some other states, particularly Texas, have generally resisted increasing taxes and fees on their businesses, Kosmont said.

But the city of Los Angeles, which has the county’s highest cost of doing business, has made some moves to lower costs for some businesses. Earlier this year, the city lowered its business tax on Internet companies. That move came after threats by Internet businesses to leave the city after city officials started reclassifying their businesses into a higher tax category.

Kosmont said that while these moves send a signal that the city is trying to be more receptive to businesses, they are not enough to change L.A.’s ranking as the county’s costliest city.

“These moves only impact a small number of companies,” he said. “It’s going to take a much broader reduction in business taxes to move the ranking.”

A special advisory panel created to reform the city’s business tax system is studying an overhaul of the business tax, including a proposal to reduce tax rates for some of the highest categories by as much as 60 percent. But action on such a proposal remains at least a year away.

Also, as cities cut back on personnel, the process for permit applications and other development services slows to a crawl.

“Many cities have few economic development staff people left now and some have no staff at all,” Kosmont said. “So if you have a project that needs city approval, it’s going to take longer and that costs more money.”