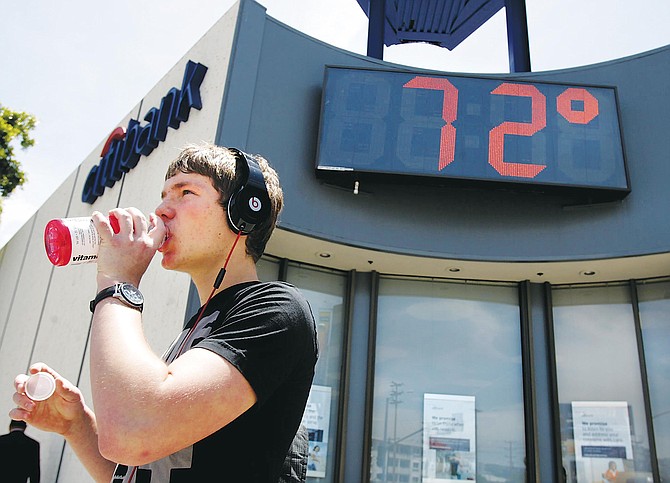 Businesses and sign companies are fighting back against tough proposed regulations the city of Los Angeles is considering for storefront and pole signs that they depend on to lure customers.

Rather than wait for strict new limits on signs, businesses and sign companies have come up with a counterproposal. Their idea is to impose a fee on businesses and use the money to step up action against illegal signs.

The counterattack comes in response to city plans to cap the number of signs at strip malls and on storefronts, as well as place stricter limits on the size and placement of signs.

Businesses and sign companies said new restrictions will hurt L.A. businesses trying to recover from the recession by preventing them from reaching out to new customers.

“It’s atrocious for the city to think like this when the economy is doing as poorly as it is,” said Brad Boeckmann, vice president of Galpin Motors Inc. in North Hills. “These signs are critical for businesses to survive. I’ve seen businesses fail because the signs are not placed right to draw people in.”

Meanwhile, in a separate but related matter, the city is considering an immediate ban for L.A.’s Westside on new electronic signs like those on bank buildings or at drugstore chains.

Boeckmann said he’s especially concerned that any Westside ban on new electronic signs could spread citywide, which would prevent Galpin Motors from putting up such a sign to compete with car dealers in other cities.

Instead of the efforts to ban or shrink signs, businesses and the sign industry want officials to crack down on the tens of thousands of illegal signs that dot the city. To that end, the counterproposal they are pushing would impose a “sign fee” on the estimated 200,000 businesses with permitted signs in the city.

The fee could also be attached to business license registrations in order to expand the fee to all businesses with signs, not just businesses that have permits.

An annual fee of $25 could generate up to $5 million for the city to beef up its enforcement efforts.

“The current rules are not being enforced and that’s why there’s so much sign clutter,” said Veronica Perez, a partner with the law firm of Holland & Knight LLP in downtown Los Angeles and a lobbyist for the California Sign Association. “We need additional resources for enforcement and that’s why we’re proposing a nominal fee on businesses.”

Sign industry representatives estimated that as much as 50 percent of all the on-site storefront signs in the city lack permits; thousands of those violate the existing sign code and would have to come down or be replaced with smaller signs.

Perez said a coalition of several business groups has formed to push for the enforcement alternative. The coalition includes the Central City Association, the Los Angeles Area Chamber of Commerce, the Valley Industry & Commerce Association, and the L.A. chapters of the Building Owners and Managers Association and New Car Dealers Association.

“We want to enforce what’s already on the books instead of having the city come up with something new that would negatively affect the business climate,” Schatz said.

The city first proposed restrictions on so-called “on-site signs” on business premises about a year ago during as controversy swelled over electronic billboards and supergraphics.

That proposed ordinance drawn up by planning officials would require new on-site signs to be about 30 percent smaller in surface area than most existing signs, with the exact size determined by the amount of building frontage facing the street. Any new or relocating business that needs an on-premise sign to identify itself must comply with these limits. Existing signs could remain in place, so long as they have permits.

Also, new “pole signs” typically used to identify all the businesses in a shopping center would face a strict height limit of 25 feet, regardless of the height or size of the surrounding buildings.

The ordinance would also ban new digital on-premise signs, like those on or next to bank buildings that give the time and temperature or those used by Walgreen Co. of Deerfield, Ill. to advertise daily specials at its stores.

The proposed ordinance has sat in committee for most of the past year pending the outcome of legal battles between billboard companies and the city. Last week’s ruling by a panel of the Ninth Circuit Court of Appeals that favored the city in a suit by a billboard company is likely to allow the ordinance to go forward.

Had the ordinance been in effect as currently worded, the caps would have prevented Ross Stores from placing a Ross Dress for Less sign on its building in Plaza La Cienega, just north of the Santa Monica (10) Freeway. That’s because the other stores in the shopping center use up all allotted sign space for the entire center.

Ross Stores moved into that building last year after the previous tenant, Circuit City, entered bankruptcy and shut down the store.

“Ross Dress for Less would have gotten no signage at all except on the (pole) sign,” said Skip Moore, president of Bill Moore & Associates, which acts as a consultant to Ross Stores on the placement of building signage.

Meanwhile, Councilman Paul Koretz has proposed a ban on all new electronic on-site signs in his district, which includes the Westside and Sherman Oaks. The council is expected to take up the proposed ban in June or July; if passed, the plan would go into effect immediately and the council would then see if such a ban should be applied citywide.

Koretz told the Business Journal last week he introduced his motion after his office learned of an application by a real estate company for an electronic sign in front of its building in his district. The sign, he said, would feature pictures of homes the company was trying to sell; the pictures would rotate in sequence every few seconds, much like a digital billboard.

“I recognize that businesses need signage. But they don’t need signs that are distracting to motorists and residents,” Koretz said. “I myself nearly got into an accident last year because I was distracted by a digital billboard on Westwood Boulevard. We let those digital billboards get out of control and I don’t want the same thing to happen with on-site digital signs.”

The ban has the support of Dennis Hathaway, president of the Coalition to Ban Billboard Blight, a citizen group in the forefront of efforts to restrict billboards and digital signs.

“Digital business signs can have the same negative impacts as digital billboards,” Hathaway said. “People living near the signs have to deal with the change in lighting levels each time the message on the sign changes. We call it the ‘TV in a darkened room effect.’”

Koretz said he might be open to exempting some signs that have minimum levels of distraction.

“It’s a matter of degree,” he said. “It’s one thing to have a gas station or theater marquee that changes once a week. It’s quite another to have a bright new image flash across every 10 seconds.”

He also would consider limitations on the hours such signs could operate.

But the prospect of a ban on electronic signs angers Galpin’s Boeckmann. He said the company has for several years considered erecting a large digital sign that would be visible to motorists on the nearby San Diego (405) Freeway, much like the signs along the same freeway in Carson that advertise local car dealers.

But Boeckmann said the company has been reluctant to proceed with such a sign – estimated to cost around $500,000 – because of the backlash surrounding digital billboards.

“We’re losing customers to dealers in other cities with those electronic signs,” Boeckmann said. “That’s not only costing us revenue, it’s costing the city sales tax revenues.”