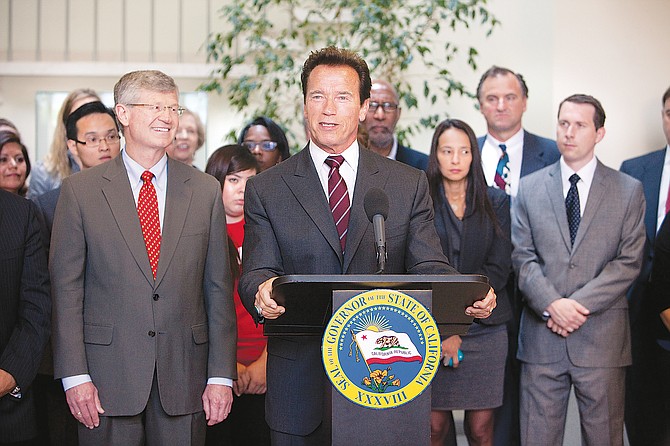 Last week’s passage of the open-primary initiative marked the second major victory in the business community’s three-pronged effort to fix state government through the ballot box.

But business leaders now face battles on two fronts. They may have to wait until 2012 for their third step, which would be changing term limits, and they will have to fight an attempt to block redistricting reform, which was the first victory.

Backed by business leaders from Los Angeles and throughout the state, the three-pronged reform program – redistricting, open primaries and changes to term-limit laws – is designed to fill the Legislature with moderates who would set aside partisan agendas in favor of improving the state’s finances, infrastructure and business-friendliness.

“The business community over the years has seen that its influence wanes when elected officials veer very far left or very far right,” said Gary Toebben, chief executive of the Los Angeles Area Chamber of Commerce. “Businesses are looking for resolution and consensus and have become increasingly frustrated that oftentimes those resolutions don’t take place in Sacramento.”

The first major fix was voter passage in November 2008 of redistricting reform, which the L.A. chamber helped place on the ballot. The chamber is also behind the third key fix: a measure to reform term limits. That measure was aiming for this November’s ballot, but may have to wait until 2012.

Key to the success in getting the redistricting and open-primary measures passed was the support and fundraising prowess of Gov. Arnold Schwarzenegger and his California Dream Team, which raised several million dollars for each measure.

The effort to get the term-limits measure before voters may have hit a stumbling block. The measure would change current term limits for state lawmakers – six years in the Assembly and eight years in the Senate – to 12 years total, with the option to serve all 12 in one house.

The L.A. chamber found an unlikely ally in the signature-gathering campaign: Los Angeles County Federation of Labor chief Maria Elena Durazo. (Business Journal publisher Matt Toledo, who is chairman of the chamber this year, participated in the fundraising effort for this measure.)

But random sampling by state election officials has shown that the measure may lack the signatures required to guarantee placement on the November ballot. Instead, election officials might have to do a longer count that would take it past the deadline for November. That would mean it couldn’t qualify for the ballot until February 2012.

What’s more, an initiative to halt creation of a citizens commission under the 2008 redistricting reform measure is also pending signature verification and could go to voters this November or in February 2012. Billionaire media mogul Haim Saban is bankrolling the initiative, giving more than $2 million so far.

“We will fight as hard as we can against that proposition to repeal the citizen redistricting commission,” Toebben said.

Government reform has become a priority for business interests in Los Angeles and elsewhere throughout the state.

“The whole point of our campaign is that given the current economic situation, this state desperately needs more jobs,” said Bill Hauck, president of the California Business Roundtable, which consists of chief executives from about 30 major corporations in the state. “A more balanced Legislature and hopefully more moderate folks would be more sensitive to this.”

Hauck and other business leaders said their effort to reform state government began almost a decade ago. A key factor was the 2001 redistricting, which resulted in legislative borders that heavily favored incumbents.

“We were pretty clear on the need for these three measures after the last redistricting fiasco,” Hauck said. “We knew that was going to eliminate competition from these races and eliminate accountability in the Capitol.”

But voters’ rejection of Schwarzenegger’s package of budget and pension reform measures in 2005 convinced business groups that reform measures had to be pursued individually. The four reform measures on that 2005 ballot attracted opposition from unions and several other interest groups that pooled their resources, raising almost $100 million to defeat the measures.

“Saving California’s state government has been – and remains – a daunting task and has required a good deal of determination, money and patience,” said David Fleming, of counsel to the L.A. law firm Latham & Watkins LLP and founding chair of the Los Angeles County Business Federation.

First out of the gate was the redistricting measure, Proposition 11, on the November 2008 ballot. Toebben said that he met with the head of the L.A. chapters of Common Cause and the League of Women Voters to craft the measure. With financial help from Schwarzenegger’s California Dream Team, a group of business allies, the measure squeaked by with 51 percent of the vote.

Then came last week’s open-primary measure. The business community had little to do with placing it before voters: The Legislature placed it on the ballot as a part of deal with then-state Sen. Abel Maldonado, a moderate Republican, for his vote on a 2009 budget package. (Schwarzenegger then appointed Maldonado lieutenant governor.)

Under the open-primary measure, the top two vote-getters in primary elections for state offices move on to the general election. Backers say this will favor moderates who can appeal across party lines in both the primary and general elections. Opponents say it will favor wealthier candidates and eliminate third parties.

Once the open-primary measure was placed on the ballot, business groups across the state jumped on the bandwagon to support it, including the California Chamber of Commerce, the California Manufacturers and Technology Association and, locally, the L.A. and Long Beach chambers as well as the Valley Industry & Commerce Association. Only a handful of chambers in southeast Los Angeles County opposed the measure.

Beyond redistricting, open primaries and term limits, another issue has gained prominence: reining in the state’s public pension programs.

“We have made it part way,” Fleming said. “Adjusting term limits and achieving substantial pension reform are the remaining challenges.”