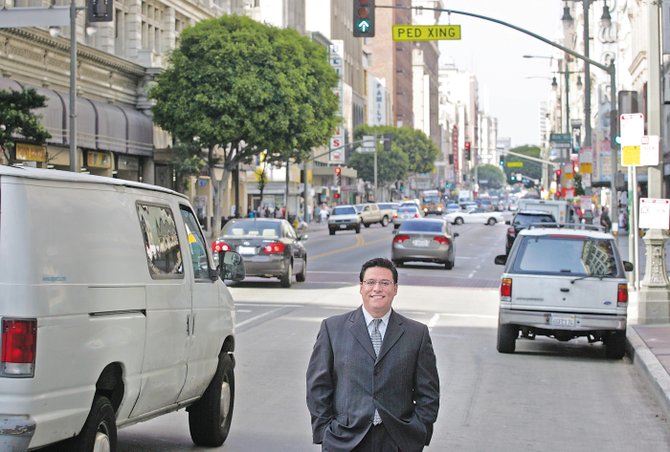 A plan to bring streetcars back to downtown Los Angeles is getting on track as three of the city’s most prominent businessmen have climbed aboard.

Billionaire philanthropist and downtown booster Eli Broad, shopping mall magnate Rick Caruso and AEG Chief Executive/L.A. Live boss Tim Leiweke have agreed to lead a September fundraiser for a streetcar project that would link L.A. Live with the cultural attractions of Grand Avenue and the historic theaters on Broadway.

Meanwhile, in the coming weeks, supporters will learn whether the $100 million project will get a crucial $25 million in federal transportation funds.

Streetcars used to run all across Los Angeles. One of the hubs was the shopping district downtown, centered on Broadway. But that famous Red Car network started to fade in the late 1950s and was extinct by the early ’60s. By then, shoppers drove their cars to suburban shopping malls and huge swaths of downtown fell into decay.

Now, Broad, Caruso and Leiweke, and the downtown business community believe that this new streetcar project can provide the missing link in the revitalization of the area. It will give people the ability to move around downtown – say, from a restaurant to a theater on Broadway, a concert at the Music Center or a basketball game at Staples Center – without having to drive to each and deal with parking. They envision streetcars loaded with arts patrons and sports fans, conventioneers and tourists, office workers and residents, all moving from place to place across downtown.

“Ever since I first started getting involved in downtown with the creation of the Museum of Contemporary Art 30 years ago, I’ve felt we needed a way to connect the various parts of downtown,” Broad told the Business Journal last week.

The project was inspired by an eight-mile streetcar system in central Portland, Ore., that was launched in 2001 and now attracts up to 10,000 riders on weekdays.

Backers of the L.A. streetcar project are hoping to have funding and approvals in place within the next two years. Construction would take another two years, putting the earliest opening date at 2015.

There are two four-mile loop routes under consideration, each of which would run by the Music Center, L.A. Live and Broadway. (See map.)

“With a streetcar going down Broadway and over to L.A. Live and then Grand Avenue, someone could park in one place and go to each of these activity centers,” Broad said.

In addition to MOCA, Broad has been a key backer of the now-stalled Grand Avenue mixed-use project across from Disney Hall. And he’s in discussions to site a museum housing his extensive art collection on Grand next to Disney Hall. As such, the streetcar would make those destinations more attractive to visitors.

Likewise, AEG will benefit if more people came to L.A. Live for a meal or a drink before or after a night out at a Broadway theater or the Music Center.

“Downtown businesses and attractions rely more and more each day on our public transportation system to bring residents and tourists to these popular destinations,” Leiweke said in a statement in June.

While Caruso isn’t directly involved with downtown destinations, he said he is fond of streetcars and trolleys.

“I have a couple of trolleys that operate at my projects at the Grove and at the Americana on Brand and both are packed with people,” he said. “And those don’t even go outside of those shopping centers.”

While the downtown streetcars would be closer in style to light rail than Caruso’s trolleys, he said the streetcars would be “a great idea” for downtown, and attract more visitors. Indeed, that’s one of the major aims of the project – to provide the missing link for commuters and visitors using the Red Line subway or Blue Line train to travel the final two or three blocks to various venues.

“The key is to make sure the route design hits all the major attractions and destinations,” said Councilwoman Jan Perry, whose district includes the South Park area around the Staples Center and Los Angeles Convention Center.

Backers of the latest effort to revitalize the Broadway theater district – which includes a dozen historic theaters and hundreds of storefronts on the ground floor of historic buildings – see the streetcar as a vital component.

They look to the example of Portland. During its first seven years of service, that city’s streetcar helped attract half the investment in revitalizing the downtown business district.

More than 10,000 housing units and 1 million square feet of new office space were built within two blocks of the Portland route.

“The streetcar has proven it can be the driving force behind redevelopment,” said L.A. Councilman Jose Huizar, whose district includes the Broadway corridor.

Huizar said he hopes the streetcar and related streetscape improvements on Broadway can entice property owners to renovate and reopen some of the area’s historic theaters. He also hopes the streetcar would draw more tenants to more than 1 million square feet of office space that’s sitting vacant above Broadway storefronts.

But he acknowledged the biggest obstacle to a streetcar system is money. So far, the only firm commitment is $10 million from the Los Angeles Community Redevelopment Agency. The $25 million urban circulator grant from the federal government expected to be announced soon would provide a big boost.

But if that money doesn’t come through, cobbling together the funds will be especially difficult. “That’s the one thing that keeps me up at night about the streetcar and about bringing back Broadway,” Huizar said.

The Los Angeles Streetcar non-profit is also laying the groundwork for the creation of an assessment district of property owners along the route. The district could raise as much as $50 million toward the project cost over a period of several years. As for the remainder, backers are still searching for federal and state funding sources.

In the meantime, Los Angeles Streetcar needs about $1 million for planning and environmental work over the next two years. The Sept. 30 fundraiser at L.A. Live is designed to launch a drive to build up that money.

One critic of the streetcar project said the city should consider other alternatives that require less up-front investment.

“If the argument is we need better transportation and circulation downtown, before we invest a hundred million dollars in a system like this, we ought to look at easing the barriers to jitneys and taxis downtown,” said Jim Moore, professor in the School of Policy, Planning and Development at USC.

The city has expanded cab service downtown with its “Hail a Taxi” program that loosens the rules for curbside pickup and drop-off. But Moore said more should be done to encourage private transportation services to fill in the gaps.

Still, streetcar supporters said having a fixed-rail route is crucial to bringing in long-term investment, especially along the Broadway corridor.

“The real key to a streetcar is the economic development potential that comes with permanent rails in the ground,” Los Angeles Streetcar’s Allen said.