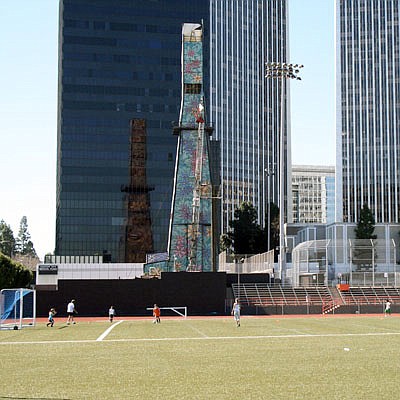 After complaints from business and developer groups, city of L.A. administrators have eliminated a key provision of proposed regulations to control stormwater runoff from new developments.

Earlier this year, the Board of Public Works approved a regulation that would force residential and commercial developers to install expensive systems to eliminate most runoff, pay a fee of $13 per gallon of remaining runoff or pay for off-site runoff reduction projects. It would apply to most projects now in initial planning stages and to all future projects.

But developers objected to the per-gallon fee, because they felt they were already going to have to spend several hundred thousand dollars on small residential developments, and several million dollars for larger commercial and multifamily projects in order to comply with the runoff control regulations.

The aim of the regulation is to reduce the amount of pollution that flows to local beaches. The Bureau of Sanitation crafted the measure in anticipation of a regional water board mandate that has been required by the state.

But the Los Angeles Area Chamber of Commerce; the Valley Industry and Commerce Association; the Central City Association and local chapters of the Building Industry Association, the Building Owners and Managers Association and the National Association of Industrial Properties all opposed the $13-per-gallon fee, which would have been calculated using peak rainfall measurements. In a letter to city officials, the coalition said Los Angeles County and neighboring cities do not require such a fee and that it would “discourage new development in the city.”

In response, the Bureau of Sanitation has proposed eliminating the fee. Developers would still be required to reduce runoff onsite or fund equivalent runoff measures at other sites.

“The Bureau believes that this agreement is a win-win for all parties and will strengthen the ordinance and its implementation,” administrators said in a letter to the City Council.

The amended ordinance cleared the council’s energy and environment committee last week and could come before the full council as early as this week.

Beverly Hills is looking to join the ranks of other county cities going after more business tax revenue as they grapple with several years of tight budgets. The City Council this month placed a measures on the March ballot that would raise oil extraction fees.

The measure if passed would convert the city’s oil extraction tax from a flat fee per barrel to a percentage of gross receipts. Revenue from the tax will go directly to the general fund.

Under the proposed change, the city would charge local oil well operators a flat tax of $2,000 per well plus 2.5 percent of the gross receipts on the sales of oil and natural gas. The current extraction tax is $3,880 for the first 10,000 barrels and 36 cents for each additional barrel taken out of the ground in Beverly Hills.

Several oil wells operate within city limits, including one owned by Venoco Inc. next to the Beverly Hills High School campus that was the subject of lawsuits brought by famed environmental crusader Erin Brockovich. Most of the suits have been dismissed by the court.

City administrators estimate the new formula, if approved by voters, would bring in an additional $1 million per year to city coffers. However, voters turned down a similar effort two years ago to hike the city’s oil extraction tax.

The Internal Revenue Service has raised the standard mileage reimbursement guidelines for business-related travel in 2011 by a penny to 51 cents per mile.

While employers are not required to reimburse employees for miles driven in the course of performing their jobs, those that do offer reimbursements tend to follow the IRS guidelines.

In raising its reimbursement guideline, the IRS cited an annual study conducted by contractor Runzheimer International that showed a slight increase in the cost of operating an automobile, including an increase in gasoline prices.