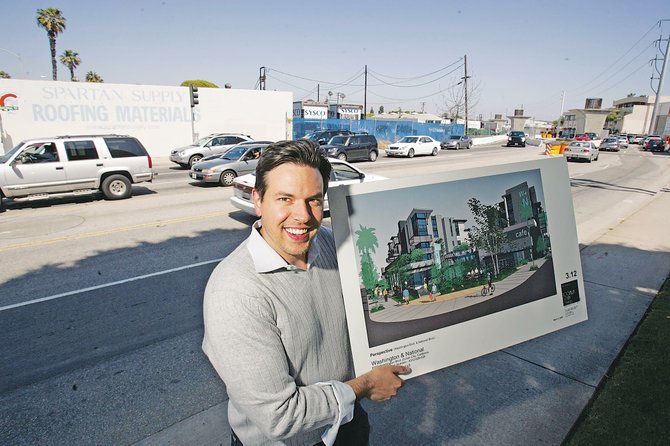 Legado’s Derek Jones with a rendering of a mixed-use project located near a future Expo station in Culver City. Photo by Ringo Chiu.

For years, a desolate stretch of Culver City has separated two thriving districts – a downtown area that now features trendy restaurants with packed outdoor patios, boutiques, hotels and movies, and the old Helms Bakery site, home to furniture galleries and a popular bar.

But now, a kind of no man’s land in between – several blocks of abandoned property and out-of-date shops – appears on the verge of getting built up, thanks to an oncoming train line.

Commercial and mixed-use redevelopment projects are planned for three abandoned parcels around the site of the expected Expo light-rail station at Venice and Robertson boulevards.

The development has the promise of transforming Culver City.

“We hope it becomes a hub that ties the downtown to the east Culver City area,” said Culver City Mayor Andrew Weissman. “Having transit-oriented development at three of those four corners next to the station can be extraordinarily meaningful in development of the corridor in between these two areas.”

“The train station is going to bring a whole new energy to the area,” said Joseph Miller, president of Beverly Hills real estate services firm Runyon Group, who recently purchased one of the parcels out of foreclosure.

Miller plans to turn an abandoned car dealership complex at Washington and National boulevards into a hip urban retail center that he hopes will draw USC students and other Expo line riders.

Across the street, Legado Cos. is planning a four-story, mixed-use project with 115 apartments atop 32,000 square feet of grocery store and pharmacy space. The project is expected to cost nearly $60 million.

“We’re timing the delivery of this project so it opens within one quarter of the opening date for the Expo line,” said Derek Jones, Legado’s chief operating officer.

The largest parcel is on the other side of the planned station. It’s a mostly vacant, weed-strewn six-acre site that the city would like to turn into a major mixed-use destination project with up to 200,000 square feet of office space, 70,000 square feet of retail, a boutique hotel and up to 200 residential units.

Culver City redevelopment officials are trying to assemble the land, which is split among several owners. They hope that process will wrap up this year and then the city can issue a request for proposals from developers. Any proposal will have to include an extra 600 parking spaces for commuters using the Expo Line. The start of construction, though, is at least three years away.

The real estate slowdown of the last three years has prompted Legado to drop 15,000 square feet of office space from its proposal and to switch from condos to apartments.

Over the last 20 years, the area around City Hall and Sony Studios has been transformed as restaurants, shops and entertainment venues have opened. The district now has a thriving nightlife scene that attracts people from throughout the L.A. region.

A similar transformation has taken place – though on a smaller scale – at the old Helms Bakery complex, which is near the other developments and about a mile east of the downtown district. The famed bakery, which closed in 1969, was converted into an antique furniture gallery. More recently, the property owner, development company Walter N. Marks Inc., has brought in an assortment of furniture shops, along with some cafes and the popular Father’s Office bar.

In between the two popular sections of Culver City is the missing link: some light manufacturing facilities, a now-abandoned car dealership complex and assorted older shops. The redevelopment projects, spurred by the placement of the train station, would bring everything together.

“We’ve been an island out here,” said Wally Marks, president of his eponymous company. “The rail line and these projects will provide a really big boost to this portion of the city and link our Helms Bakery complex with the bustling downtown area.”

The catalyst for the redevelopment proposals is the Expo light-rail line, the first rail link between downtown Los Angeles and L.A.’s Westside.

The $680 million first phase of the line – under construction – runs from downtown, near USC and west along the former freight line along Exposition Boulevard to Culver City. The $1.5 billion second phase, still in final planning stages, will run from Culver City through Cheviot Hills and West Los Angeles, and into Santa Monica.

The first phase will begin operating to La Cienega Boulevard next year, and the Culver City station is scheduled to open in 2012.

The Venice-Robertson station will be elevated, which will add expense and time. The total cost of the station is expected to be near $60 million.

The 2012 opening date has given Culver City officials and developers extra time to hone their plans for the parcels surrounding the station while waiting out the recession. The focus has been on proposals for transit-oriented development, which relies heavily on foot traffic to and from the rail line.

This transit-oriented development “will bring housing, employment and shopping together in ways that are uniquely important to the city and the region by promoting goals of improved air quality and mobility,” said Sol Blumenfeld, director of community development for Culver City.

To entice developers to these parcels, the city will allow slightly higher densities than current zoning. In exchange, developers will be asked to provide or pay for one of four “community benefit” options: additional parking, more open space, streetscape improvements, or a shuttle service to the rail station and nearby destinations.

Jones said the Legado project, known as Legado Crossing, will take advantage of the additional density; in exchange, he said the project will include extra open space. The project is slated to include a grocery store, a drugstore, a couple of restaurants and small retail shops. The site is now home to an abandoned building supply store and a lot being used for vehicle storage. Construction is scheduled to begin this year.

In recent years, Culver City residents have voiced concerns about traffic and parking associated with new development. And residents have raised concerns about the additional traffic the Legado project would generate. Jones said his company would pay for traffic mitigation measures at nearby intersections. He added that having grocery and drug stores on site means residents of the project could shop on foot.

The Miller parcel across the street was long home to a series of car dealerships, called Culver City Import Group, owned by the Miller family. The dealerships were unrelated to the larger Miller Automotive Group. Culver City Import Group eventually closed and the family sold off the land to a local private equity firm. But then the real estate collapse hit and the parcel went into foreclosure. In September 2009, one member of the Miller family, Joseph Miller, stepped in to buy the land back while it was still in foreclosure. (Miller is a cousin of Daniel Miller, the Business Journal’s real estate reporter. Joseph Miller is also featured on Page 26 in this week’s 20 in Their 20s special report.)

Miller said he plans to rehabilitate most of the existing buildings and turn the site into a hip urban shopping center comparable to the Lab in Costa Mesa or Space 1520 in Hollywood. He said he will present plans to the community over the next few months and to the city by the end of the year. Because planning is still in flux, Miller said he could not give a firm cost estimate.

“The coming Expo line was the single biggest reason why I decided to buy back the site,” he said.