Wonderful Gets Sweet on Lemons 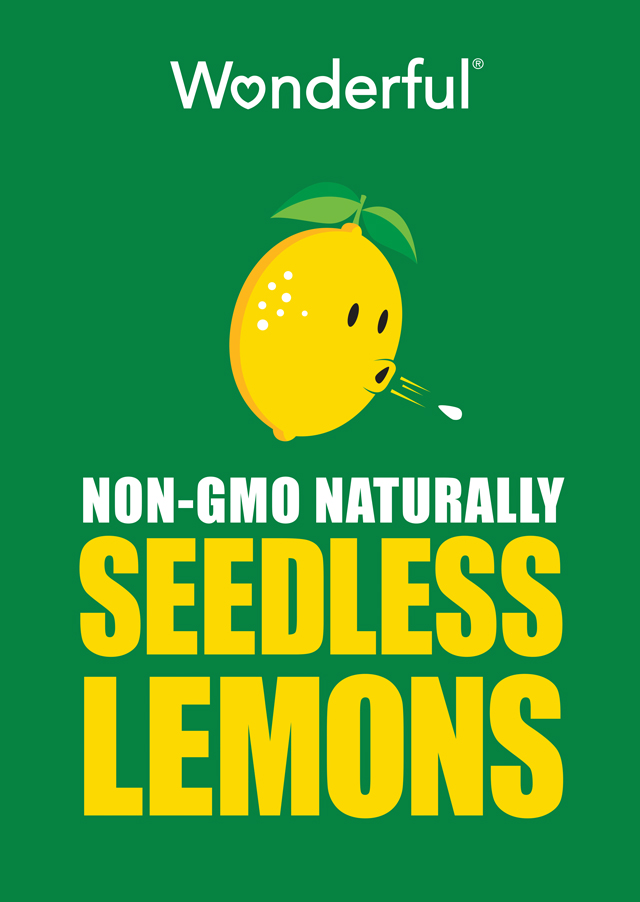 West Los Angeles agribusiness giant Wonderful Co. hopes it can work its marketing magic on yet another underappreciated product: the seedless lemon.

Wonderful, which in 2002 turned the juice from the much-overlooked pomegranate fruit into a premium-brand juggernaut, is hoping to repeat that success when it launches its seedless lemon brand in stores and among distributors this fall.

While seedless lemons have been around for decades — rival citrus grower Limoneira Co. of Santa Paula has been selling them for more than 20 years — the fruit has remained a niche category with limited growth in recent years.

Wonderful Co. is betting it can change that. It obtained exclusive rights to a seedless lemon variety developed by an undisclosed third party, spent years adapting and growing it in California, and now plans to market it.

Wonderful said it had determined through market research that lemon buyers are willing to pay a premium for seedless lemons. The company is convinced it can use this willingness — along with its advertising prowess — to expand the market for seedless lemons.

“As consumers’ appetite for seedless varieties in produce continues to grow, Wonderful Seedless Lemons will disrupt the industry and become a top category driver for branded produce,” Adam Cooper, the company’s senior vice president of marketing, said in the announcement.

Cooper told the Business Journal that Wonderful has been selling seeded lemon varieties for more than 20 years; those lemons can be found at several grocery chains in Southern California, including Ralphs Grocery Co. Inc. (a subsidiary of Kroger Co.), Vons Cos. Inc. and its Pavilions stores (both subsidiaries of Albertsons Cos.), Trader Joe’s Co., Costco Wholesale Corp. and Sam’s Club (a subsidiary of Walmart Inc.).

Wonderful, a privately held company founded by Beverly Hills billionaires Lynda and Stewart Resnick, reported $4.2 billion in revenue in 2017, placing it at No. 5 on the Business Journal’s Largest Private Companies list. The company has about 10,000 employees worldwide. In 2015, the company changed its name; previously, it had been known as Roll International and then became Roll Global.

Wonderful is one of the largest agricultural operations in California with more than 180,000 acres of farmland in the state. The company claims it is the largest farmer of tree nuts and second largest produce company in the United States. Its other citrus brands include Halos mandarin oranges and Sweet Scarlett’s ruby red grapefruit. In addition to its agricultural assets, Wonderful also owns Fiji Water and Teleflora, a flower delivery service.

The company said it would provide more details about its seedless lemons, and the marketing campaign it intends to run to promote them, closer to the fall launch date.

Convincing consumers to pay a premium for Wonderful’s seedless lemons will be key. One reason: The lemons cost more to produce than most seeded varieties.

“A seedless (lemon) on average costs between 20% and 25% more than a conventional lemon due to historical lower volume per acre,” said John Chamberlain, vice president of marketing for Limoneira, which has been growing and selling lemons since the company was founded 125 years ago.

Chamberlain said Limoneira welcomes Wonderful’s entry into the seedless lemon market. “We very much encourage the expansion of lemon niches,” he said.

When it does begin selling the seedless lemons this fall, one of Wonderful’s likely target customer bases will be restaurants and distributors to restaurants, according to Tracy Kahn, curator of the Citrus Variety Collection at UC Riverside and a lecturer in the university’s biology department.

“Over the last 30 or 40 years, seedless lemon sales have surged at restaurants that present lemon slices as garnishes in water and iced tea drinks and on some of their dishes where seeds become a nuisance and a distraction,” Kahn said. “I would expect restaurants and those companies that distribute to restaurants to be among the biggest customers for Wonderful’s seedless lemons.”

Kahn said there hasn’t been much demand among general consumers for seedless lemons because they mostly use lemons for juice, so seeds fall by the wayside during preparation.

In its announcement, though, Wonderful said it intends to target consumers, indicating this is where it sees major potential for market growth.

Wonderful points to its track record, noting that over the last 20 years, it has spent more than $1 billion in successfully expanding markets for its pistachios, mandarin oranges and pomegranate juice.

On occasion though, the company’s marketing efforts may have gone too far. In 2012, a federal administrative judge ruled that the company lacked sufficient evidence for health claims it made in advertising its pomegranate juice. The U.S. Supreme Court in 2016 declined to review the judge’s ruling, letting it stand.

For seedless lemons, though, the biggest risk is that consumers won’t bite — at least in the numbers Wonderful is counting on, according to Gerry Sweeney, managing director at Roth Capital Partners in Newport Beach; Sweeney follows Limoneira, a publicly traded company.

“As with any marketing campaign, there’s always the risk of spending promotional dollars and nobody shows up,” Sweeney said.