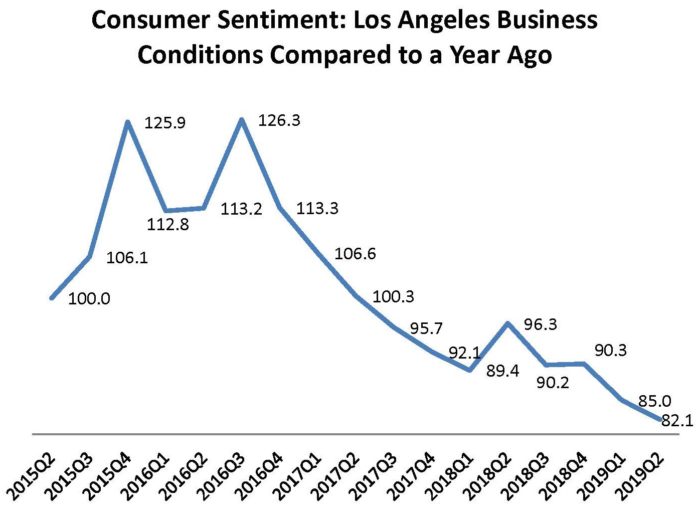 Los Angeles consumer confidence fell in the second quarter, reaching a four-year low as consumers grew increasingly concerned about local and national business conditions, according to a survey released July 10.

The indices for consumer sentiment on the local and national economies are the first of their kind for Los Angeles. They are produced through an alliance between the Lowe Institute and Chapman University in Orange. A baseline index reading of 100 was set in the second quarter of 2015 for the index, which debuted in 2017.

The second quarter reading was from a sampling in mid-June of roughly 500 L.A. County residents who answered questions about their economic situation, their outlook for their own finances and spending in coming quarters, and their outlook on the local and national economies.

The survey results stood in sharp contrast to current economic conditions in L.A. County. The unemployment rate has hovered around a near-record low of 4.6% for most of the last year while employers have been adding jobs at around a 1% clip over the past 12 months.

According to Cameron Shelton, director of the Lowe Institute and associate professor of political economy at Claremont McKenna College, consumers during the second quarter were more concerned about future business conditions.

“Consumer sentiment in Los Angeles County has hit record lows despite continued health of the economy, largely because of fears of how broader business conditions may prove detrimental to the region in the future,” Shelton said.

He said this concern is causing consumers to become more cautious in their future spending plans and pointed to one key indicator in the survey: willingness to buy a car in the next year. According to the survey, the index reading for consumers saying the next 12 months would be a good time to buy a car fell to a record 80.1 in the first quarter, a drop of 5.6% from the first quarter.