It’s been just over a year since Brian Saenger took over the helm of downtown-based Ratkovich Co., one of the largest development companies in L.A., and it’s been a busy year at that.

Saenger, who was previously the company’s chief operating officer and general counsel, took over last February from founder Wayne Ratkovich, who stayed on as chairman. He is not involved in day-to-day operations but acts in an advisory role, helping to make deals and works on bigger projects.

“It has been really great. Wayne has been very supportive, the team has been very supportive and it was a really seamless transition. I’ve been spending this year and last year doing a couple of things of note. One is prioritizing some civic and business engagements and pursuing several new opportunities, so it’s been good. I can’t believe it’s been a year,” Saenger said.
As for new acquisitions, Saenger said the company is interested but hasn’t seen a lot of properties go to market.

Still, Saenger said the company is open to industrial to office conversions and retail to mixed-use or multifamily property conversions.
“We think there is going to be cost savings in converting existing buildings to a different use,” Saenger said, adding that construction costs are high right now for new builds.

One of Ratkovich Co.’s biggest projects in the works now is West Harbor, a 42-acre retail center in San Pedro with a 6,200-seat amphitheater. It is working on the project with San Pedro-based Jerico Development Inc.
The site was formerly known as the San Pedro Public Market. Ratkovich secured a 50-year ground lease for the site.

The $150 million project recently raised $35 million in equity financing from Osprey Investors, bringing the total raised to $65 million of outside equity.
“This significant investment from Osprey Investors is another example of the strong interest from institutional partners in West Harbor,” Wayne Ratkovich said in a statement. “West Harbor is one of the most unique projects I have been involved with, and it is truly the future of waterfront destination dining and entertainment in Southern California. This new equity investment is a major vote of confidence in our vision for West Harbor.”

Saenger said that early in the pandemic “retail leasing was challenged” but had since rebounded at the center.
“When Covid started there was a bit of a slowdown on tenant interest. You had retail tenants that were trying to keep the businesses they had open and weren’t focused on expanding to new locations, but as we rounded the corner into 2021, that changed,” he said.

Tenants that will be at the center include Yamashiro, a popular restaurant in Hollywood; Hopscotch, a light and art museum; and Mike Hess Brewing.
West Harbor is expected to break ground later this year and be completed during the second half of 2023.

Tenants, Saenger said, are excited by the location and the amphitheater, which will draw in visitors. The tenants that have already been announced for the center, he added, are enticing other tenants to sign leases as well.
Still, Saenger said the company is working on getting the right tenant mix, which will be a mix of restaurants, retail and entertainment.

The Villages at The Alhambra, one of Rakovich’s biggest proposed developments, has stalled.
The 40-acre The Alhambra is already a mixed-use project with 900,000 square feet of office space, with office tenants such as USC and various L.A. County departments. It also has a gym, putting green, retail and walking areas.

Seanger said in the last year the company expanded or rented more than 150,000 square feet of space at the center despite the pandemic and saw strong rent collections.
Ratkovich Co. has proposed to add The Villages at The Alhambra, a project with 790 residential units replacing parking lots and storage at the mixed-use site. The residential units would be a mix of for-sale and rental units. 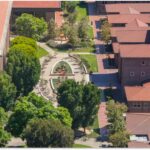 In October, the Alhambra City Council denied the proposal. In January, Ratkovich Co. filed a lawsuit trying to get the city to approve the project citing the Housing Accountability Act, a law that limits a city’s ability to block developments that comply with the area’s codes and regulations.
The city did not immediately respond to requests for comment on the lawsuit.

“We felt very strongly that we had a case under the Housing Accountability Act and that we will prevail,” Saenger said. He expects to have a decision made by the courts by the end of the year.
Kitty Wallace, an executive vice president and multifamily expert at Colliers, said there has been a “tremendous amount of construction” in the San Gabriel Valley which has always been a “popular pocket” for multifamily development.

Currently, Ratkovich Co. is pursuing roughly 1 million square feet of opportunities, according to Saenger.
The company is also working on making sure its existing properties are doing well.
The Alhambra is more than 90% leased and The Hercules Campus in Playa Vista–formerly home to Howard Hughes’ aircraft hangar–is 100% leased. It counts Google, YouTube Studios and ad agency 72andSunny as its tenants.

Saenger said the company was incredibly excited about its development pipeline.
“The fun part is the creative part and that’s what we’re looking to do,” he said.

And while Covid has not had a large impact on the design of the company’s projects, Saenger said the company has been “monitoring what clients are going to want when they lease office space or retail space and we’re keeping an eye on what that’s going to look like.”
“Other than monitoring and being responsive to tenant needs, I dont think it’s really changed for us our view on the city of Los Angeles and the types of projects we want to do,” he added.