Walt Disney Co. has embroiled itself in a fight with Florida Gov. Ron DeSantis over the Burbank company’s position on a controversial new law. But will it have an impact on Disney’s bottom line?

Disney’s unusual right to act as its own government in Disney World in Florida – escaping local taxes and regulations – may be in some peril. If Disney loses that, it could be costly and more burdensome. Several experts believe that fight will simmer down, but some point out the culture war may dent the company’s standing with many customers.

Supporters thought the topics are too confusing and inappropriate for such young children. Opponents deemed the legislation the “don’t say gay” bill. Initially, Disney declined to take a side on the issue. After employees staged a walk-out in late March, Disney released a March 28 statement saying, “our goal as a company is for this law to be repealed by legislature or struck down in the courts.”

Since then, DeSantis has talked about revoking the company’s “special privileges” by dismantling the Reedy Creek Improvement District Act, a 1967 measure that gave Disney control over 47,000 acres that straddle two counties in Florida where Disney World is located. The company decides on its own public services, zoning and land use decisions and effectively allows Disney World to act as its own government.

If the law is repealed, Disney may be required to submit to building inspections by the two counties. It may be stuck with fees and taxes it now escapes, and various regulations could be imposed by local politicians.

From a marketing perspective, Disney finds itself caught between both sides of the political spectrum. Conservatives are bashing the company for opposing the bill, which they see as an attack by Disney on parents’ rights. Left-leaning critics are upset for Disney’s past political donations to various Republicans, including DeSantis.

Marty Cooper, owner of PR firm Cooper Communications in Encino and a Disney shareholder who worked as advertising and promotion manager at Disneyland when Walt Disney was alive, said that “Disney is in a no-win situation. They offend the left and they offend the right. That’s what happens whenever they choose to do political donations.”

Disney is arguably the most powerful company in Florida. It is America’s largest single-site employer, with 77,000 employees at its Orlando theme parks. It has control of 43 square miles. The Walt Disney World Resort, comprised of four theme parks, two water parks, 36 hotels and other amenities, welcome an average of 58 million people a year, making it the most-visited resort in the world.

In the past decade, Disney’s dollars flowing to the statehouse in Tallahassee have skyrocketed: The company spent a total of $2.1 million on state elections in 2010, according to reporting by Florida Trend, including donations to candidates, state parties, political committees and constitutional amendment campaigns. By 2018, when DeSantis was elected governor, that figure ballooned to $28.3 million on Florida state elections.

The question stands as to how far Florida Republicans plan to go in seeking to punish Disney and whether they revoke the Reedy Creek Improvement District.

“Could they revoke it? Yes. Will they do it? Of course not,” Cooper said.  “They’ll find some other way to punish Disney. Disney is too big a cash cow for Florida to do more than a slap on the Mouse’s wrist.”

The reason, Cooper said, is because Florida and Disney need each other economically.

“They’re irrevocably locked together,” Cooper said. “Disney is not going to pack up and move and the state government is not going to do anything to put Disney in dire straits. Their actions will be more symbolic than substantive.”

Even if the special privilege is revoked and Disney gets saddled with more costs and obligations, it may amount to a rounding error for a company that had $67 billion in revenue last year.

Michael Morris, an analyst at Guggenheim who follows Disney, said, “I have seen nothing specific or helpful that would indicate this will have a financial impact on the business.

“I do think prolonged disagreements between management and employees run the risk of having an economic impact. It’s not clear to me how serious the disagreement is when it comes to how many employees are impacted and how that will ultimately impact the guest experience.”

However, Morris noted that “the relationship between The Walt Disney Co. and the state of Florida has not come up as a key thesis driver in the past. That is definitely new ground for us.” 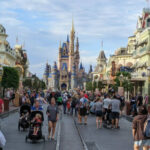 Marty Kaplan, media professor director of the USC Annenberg Norman Lear Center, does not believe any quarrel will affect Disney’s bottom line. “It’s a lot of political theater, pandering to various interest groups,” Kaplan said. “I’d be surprised if it has any impact on any revenue or regulation.”

Kaplan believes that DeSantis, who may have presidential aspirations, is milking the controversy to play to his base. Disney’s stock has declined since the flap started. Beginning March 22, the day of the walkout by Disney staffers, shares have dropped 7%. That’s much larger than the 1.4% decline in the S&P 500 index and the 0.7% weakening in the Dow Jones industrial index over that same span. It’s unclear how much the fight played a part in that drop.

The fracas could have other impacts. Disney has been slowly beefing up its Florida operations and last year announced that 2,000 of its Parks department employees will move from California to Florida. Disney has been silent on whether that move or future ones will continue. Disney had 11,250 employees in the Los Angeles area as of last year, a fraction of the 77,000 or so in the Orlando area.

A survey by Issues & Insights earlier this month found only 43 percent of respondents were following the story. A second question was: “As a result of the recent stories, how much trust would you place in Disney’s programming for your children, assuming you have any?” Among those following the story, 54% said they trusted Disney, while 21% expressed “little trust” and 20% had “no trust.” “That’s four of every 10 Americans (with little or no trust), a dismal result for such a once-beloved corporation,” the researchers said.

Also, a Gallup poll in January said 47 percent of Americans identify as Republicans or lean that way. If a sizable portion of those people boycott Disney products, it could hurt more than the loss of special privileges in Florida.

“Disney has alienated a lot of people now,” DeSantis said at a March 31 press conference. “And so the political influence they’re used to wielding, I think has dissipated.”