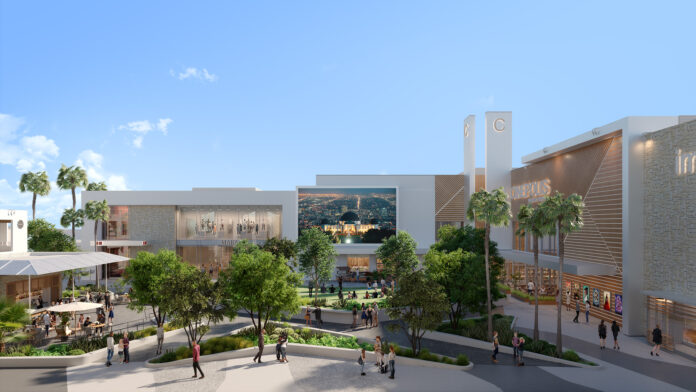 The retail component at Hollywood Park, a 300-acre mega-development in Inglewood centered on SoFi Stadium, is well underway.
In total, there will be up to 890,000 square feet of retail surrounded by creative office space. Residences, a park and the stadium are nearby as well.

Christopher Meany, managing partner at Wilson Meany, added that in order to create that special sense of place you need retail to give visitors and residents a walkable area.
The retail component of Hollywood Park, which is already 65% leased or under negotiations, is scheduled to open next March. The shells for the buildings need a few more months before spaces are further improved for specific tenants.

Hollywood Park will have a combination of large tenants, such as a Cinepolis movie theater and smaller tenants, including Sky’s Gourmet Tacos, Red Bay Coffee and Antojitos Martin, a juice and snack bar.

“To get the charm, we felt the project needed smaller tenants,” Meany said.
Will Heidel, who works on development and leasing at Wilson Meany, said the stores ranged in size from less than 500 square feet to 55,000 square feet.

Meany said that with the tenant mix, the center is hoping to become a place for people to come to daily, and not just on days when there is a game or event at SoFi Stadium.
And Hollywood Park is helping further interest in Inglewood as a whole.

He added that developers are interested in hospitality and mixed-use projects in the nearby area with a retail component to build on the expected success of the Hollywood Park development.

Key to the retail development, Meany said, is “duality.”
“It lives two lives,” he said, adding that the area must cater both to the local market as well as people expected to visit for events.
“The local community with 900,000 people is woefully underserved,” he said.

The center will have a mix of retailers, resulting in opportunities for a variety of tenants.
And while there are no quotas for how many of the retailers will be local companies, Meany said the company is working to get local and national tenants and have at least 30% of the center feel “authentic and local.”

“National tenants are every bit as important in setting the tone,” he said.
This is true for tenants like Cinepolis which Meany said was the “best luxury theater offering without equal,” and would help with the overall feel of the center despite being based in Mexico.

Other tenants such as Antojitos Martin are hyperlocal, as is GRDN by Three Weavers, a tasting room and restaurant for the brewery which is an Inglewood staple. Founded by Lynn Weaver, it will remain open at its current location.

“She’s really putting her heart and soul into this. It’s going to be an amazing addition,” Heidel said.
And while there will be a lot of local tenants, Meany said a good mix is key.
“It’s not about the numbers. It’s about finding the mix of great international, national and local tenants,” Meany said.

Despite being food and entertainment heavy, Meany said there will be some soft good retailers as well.
“We hope to find a synergy between the offerings,” Meany said.

Other tenants already announced for Hollywood Park are Iconix Fitness, Grilled Fraiche and Residency Art Gallery.
“They are trying to create a cool mix,” Quinn said of the tenants that have been announced. “You see it going in that direction to create that sense of community.”

Hollywood Park isn’t the only development going up in Inglewood.
The Los Angeles Clippers will be moving to an arena under construction in the area. The Intuit Dome, which is expected to be completed in 2024, will be a state-of-the-art indoor arena.

In 2020 Clippers Owner Steve Ballmer purchased the nearby Forum from Madison Square Garden Co. for $400 million after facing obstacles related to building the new Clippers stadium.
And other developers have started mixed-use projects nearby as well.

Quinn said that while retail leasing rates are still lower in Inglewood than in some other areas of Los Angeles, “land values are in certain cases as high as anywhere in Southern California. And that’s related to the demand from hospitality and mixed-use developers.”
Meany said Hollywood Park was taking on the role of the epicenter of the area.
“We are 100% the center of Inglewood and we embrace that. We are also the center of a region and we embrace that,” Meany said.

Inglewood, he said, is poised for a breakthrough.
“This part of the city, one of the densest parts of the city…was one of the most underserved areas in terms of retail,” he said. “We see the opportunity here to create a new node within L.A. and give this community what people in Santa Monica or Pasadena have.”

Sandy Sigal, chief executive and chair of Woodland Hills-based NewMark Merrill Cos. Inc., has long been a believer in the area. His company owns retail real estate in the city.
He said “the beauty of Inglewood” is its great access to transportation, nearby jobs and a residential population.
“You have a long-term, very loyal community who live there,” he said. “It has been a great place for us to invest in.”

Hollywood Park, he said, was a “very positive addition to the area.
“You’re adding a huge job creator like SoFi and all of the buildings that are around it. Maybe Inglewood was a little bit of a secret or people had a perception that really wasn’t reality, and now that they have a reason to go there, they see that Inglewood is a really well-situated and welcoming community.” Sigal said. “It’s a big deal, a little bit like what happened in downtown with the Staples Center (now Crypto.com Arena).”

Sigal added that his company would be interested in other retail properties in the area.
And people expect that the developments in Hollywood Park and the area surrounding it will cement Inglewood’s role as a destination.