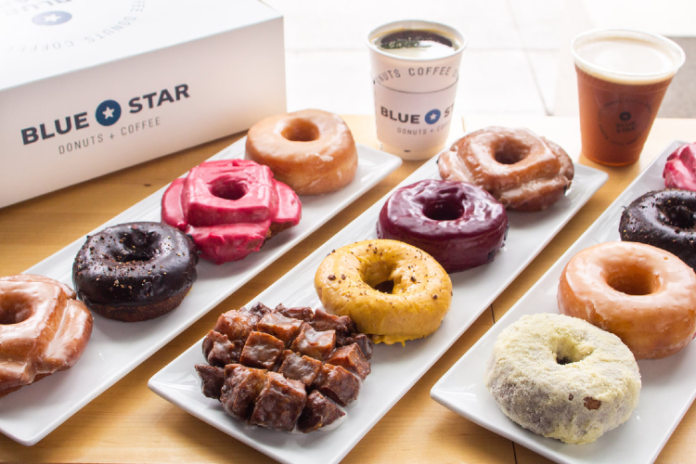 After centuries of being caked, leavened, covered with sugar, fried, glazed, frosted, or stuffed with filling, donuts have evolved from a breakfast staple to an anytime treat. Like coffee shops — purveyors of the perfect beverage to drink with the popular pastry — donut shops have become cornerstones of the communities in which they’re located, not just as low-cost food service businesses for customers on the go but also a reflection of the cultural and culinary influences of the individuals within them.

Los Angeles’ multicultural landscape, in particular, has generated more than a handful of iconic donut brands and even produced paraphernalia that has become synonymous with the endlessly edible rings of dough, which might explain why more and more donut companies, both new and established, come to the city to try to secure a financial foothold.

Although it was purchased in 2004 by City of Industry-based chain Yum Yum Donuts, Winchell’s Donut House remains among the oldest donut franchises in Los Angeles since Verne Winchell founded the company in Temple City in 1948. In 1975 Winchell’s inadvertently transformed the ethnographic landscape of the Southern California donut business community when the company hired its first trainee of Southeast Asian origin, Ted Ngoy.

Ngoy learned the ropes under the company’s extensive training program and leveraged that knowledge to launch a chain of his own stores, where he later shared his experience with employees and entrepreneurs who would open approximately 2,400 Cambodian-owned donut shops by the mid-1990s, according to the L.A. Times.

It was also those Cambodian entrepreneurs who popularized the pink boxes that have become synonymous with donuts, after a businessman elected to use them because they were cheaper to buy in bulk than standard white ones.

Another local institution, Randy’s Donuts in Inglewood, is celebrating its 70th anniversary in 2022, with recently announced plans to expand its already more than 100 stores to 165 domestically and internationally. Although he hopes to spread Randy’s gospel across the globe, owner Mark Kelegian pledged to protect not only the brand but also the classic flavors that have made the business a Southern California staple.

It’s this seemingly insatiable appetite for donuts that has allowed Kelegian to grow Randy’s significantly and opened the door for an estimated 1,500 donut shops to cultivate their own niches in Los Angeles County, according to National Geographic, which deemed Los Angeles the “donut capital of the United States” in 2019. While the arrival of national franchises like Charlotte, N.C.-based Krispy Kreme Inc. and Canton, Mass.-based Dunkin’ Donuts underscores the financial potential of the local donut scene, established but smaller chains such as Sawtelle-based Primo’s Donuts and Koreatown-based California Donuts have been able to take a bite out of the industry by maintaining high-quality standards and introducing unique flavors (horchata and taro) and ingredients (vegan and gluten-free) that appeal to the residents of their respective neighborhoods.

Meanwhile in Monterey Park, Jason Tsai has grown a successful chain of gourmet, Asian-influenced donuts and filled pastries with Dot & Dough, and Mark Trombino’s Highland park-based chain Donut Friend has distinguished itself since 2013 by offering decadent rock ‘n’ roll-themed concoctions alongside a variety of do-it-yourself options for patrons to customize what goes in and on their donuts.

But whether consumers prefer sweet, simple and cheap or inventive and extravagant — and likely a little more expensive — Los Angeles has donut shops to satisfy every taste while also tapping into its multiplicity of cultures, satisfying cravings for creative cuisine and a sense of community at the same time.

THE “HOLE” STORY: Jason Tsai started Dot & Dough with chef Nick Mui in 2019 when the two decided to combine Tsai’s business acumen with Mui’s culinary skills. One of their signature donuts is the malasada, a sugar-covered fried donut puff injected with a variety of unique flavors including matcha, taro, “mango milkshake,” and earl grey, and featuring toppings like mochi and the Japanese food snack Pocky for an extra bit of texture. With six locations currently in operation and another five in various stages of construction, including one on Melrose set to become a new headquarters, Tsai said he hopes to develop a chain that empowers franchisees to learn his and Mui’s business so that they can create their own.

THE “HOLE” STORY: Ralph Primo Sr. and his wife Celia opened the first Primo’s in Sawtelle 65 years ago with a check they were going to use for a down payment on a house that they lost out on. While Celia worked the front counter over the next six decades, offering maternal charm to generations of customers, Ralph collaborated with the business’ suppliers to perfect specialties like Primo’s buttermilk bar, which became staples of the menu and earned accolades from outlets such as Thrillist and Food & Wine magazine. Since 2018, Ralph Jr. has worked to maintain the business’ “mom and pop lane” by preserving his father’s classic flavors and perfectionist streak at a still-affordable price ($25-$27 for a dozen). He is building on that foundation by maximizing donuts’ social media appeal with photos of the brand’s seasonal and special event donut decorations, from Valentine’s Day to the Super Bowl.

MOST POPULAR DONUT: Glazed ($1.85), which sells three times as much as the second most popular, the chocolate raised ($1.85)

THE “HOLE” STORY: The more than 25-foot-in-diameter, gunite-covered donuts that have become Randy’s signature dotted the L.A. landscape for 20 years before Robert Eskow purchased two locations of the now-defunct Big Donut Drive-In chain in 1976 and renamed them after his son. Mark Kelegian purchased the business in 2015 and expanded it to nine stores in the U.S., South Korea and Saudi Arabia, as well as what he said were 100-plus stores in domestic franchising and 65 internationally at different stages of development. Despite the scale, Kelegian said Randy’s continues to use the same proprietary flour recipe that it always has and makes all of its 300,000 donuts per store per month by hand, protecting the integrity of the brand.

THE “HOLE” STORY: Former record producer Mark Trombino conceived of Donut Friend as a cross between a traditional donut shop and a frozen yogurt shop, an eatery for sweet treats that customers could customize with a selection of toppings and fillings. The pandemic has, however, hindered people from coming in to experience the range of possible combinations. In the business’ first few years Trombino and his staff developed an eclectic menu of donuts with names inspired by the rock bands. As head chef and chief executive, Trombino experiments with unique combinations (green tea and toasted black sesame seeds, cookie butter, chocolate glaze and sea salt) while also delivering traditional flavors in a donut-shaped profile.

THE “HOLE” STORY: Inspired by her travels in France, founder Katie Poppe conceived Blue Star to combine gourmet pastry making with the bite-sized simplicity of donuts, starting with a signature 18-hour, double-fermented brioche dough and then experimenting with unexpected flavors like bourbon, olive oil and basil. The pandemic forced the company to file for bankruptcy in August 2020, but it relaunched in December of the same year by implementing a new business plan that involved wholesale contracts with grocery stores — first in the Pacific Northwest near Blue Star’s headquarters and then with retailers in California — and a soon-to-launch nationwide mail-order operation.

NUMBER OF LOCATIONS: 12 in Los Angeles, 127 in California,

THE “HOLE” STORY: Founded in Quincy, Mass., in 1950, Dunkin’ Donuts has steadily grown into one of the most popular donut chains in the United States. Despite its rebranding as a “beverage-led company” in 2020, Dunkin’ prides itself on a legacy of iconic pastry options, from its best-selling Boston Kreme to its “Munchkins,” or donut holes, all of which are produced using proprietary recipes and ingredients sourced from distributorship warehouses located throughout the country.