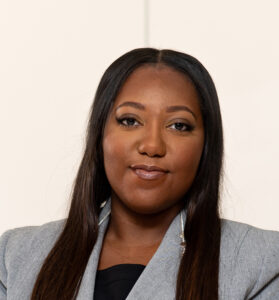 Asecond-year associate at McGuire-Woods, Latrice Burks already has established herself as a leader and rising star at the firm and a champion for diversity and inclusion. At the USC Gould School of Law, Burks was the founding member and co-president of the USC Womxn of Color Collective and she is the first African American woman to serve on Gould’s Board of Councilors’ Clerkship Committee.

Since joining McGuireWoods in September 2021, Burks has made her mark, focusing her practice on complex commercial litigation, with a passion for intellectual property. In a critical defamation case, she was part of a team representing a client sued for alleged defamation and contractual interference. Burks zeroed in on the common interest privilege, which turned out to be one of the defense team’s strongest arguments. Based on this argument, McGuireWoods obtained a full dismissal of the matter with no settlement payment.