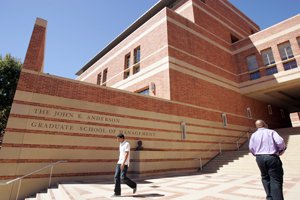 Three Los Angeles business schools rated among the nation’s best graduate MBA programs, with each moving up in rank this year, according to Bloomberg Businessweek’s 2017 list of Best Business Schools.

The rankings, released Thursday, are based on surveys of recruiters, alumni and students, as well as recent graduates’ success at landing jobs and securing high starting wages.

The UCLA Anderson School ranked No. 19, up three slots from 2016, and placed third in California behind Stanford (No. 5) and UC Berkeley (No. 11). The MBA program had placed third in the Business Journal’s September list of business schools ranked by the number of degrees awarded.

The USC Marshall School ranked No. 30, up eight places from last year. The MBA program had ranked first on the Business Journal ranking of number of degrees awarded.

The Pepperdine Graziadio Business School ranked No. 75, up nine spots from last year, the biggest jump on the West Coast.

Bloomberg Businessweek named Harvard Business School the nation’s best MBA program for the third straight year. The annual ranking put the Wharton School at the University of Pennsylvania and the MIT Sloan School of Management in the second and third slots, respectively.