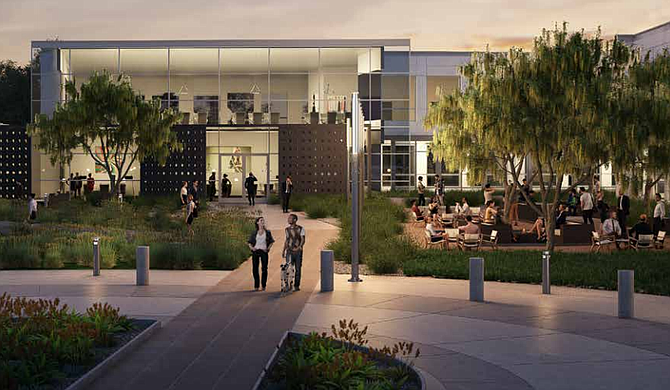 Photo of the potential 101,000 square feet of office space and a 3.2-acre land parcel in Costa Mesa courtesy of SteelWave.

Although the San Diego Chargers have not yet pulled the plug on their hometown, the team is making plans for a possible move to Los Angeles.

The Chargers have agreed to lease 101,000 square feet of office space and a 3.2-acre land parcel in Costa Mesa, according to a source familiar with the deal. City officials said in a statement posted Friday to the Costa Mesa website that the Chargers have selected the city as its potential new home, but they didn’t provide more details.

The plan to move to Los Angeles – where players would share the Inglewood stadium at Hollywood Park with the Los Angeles Rams starting in 2019 – is not a done deal, however.

Chargers Owner Dean Spanos has until Jan. 15 to make a decision, and if he chooses to stay put in San Diego, the Costa Mesa lease deal would be nixed. At that point, the Los Angeles option would transfer to the Oakland Raiders.

The Chargers have unsuccessfully sought a new stadium in San Diego for 15 years. The latest blow came last month, when San Diego voters rejected a proposal to finance a new stadium and convention center. That left an opening for a potential move to Los Angeles, an option approved by National Football League officials when they signed off on the Rams’ move from St. Louis.

The Chargers office space would be at a property called The Hive, at 3333 S. Susan St. The land parcel, located next door, would be able to house practice and training facilities. The Chargers would also occupy offices at the Inglewood stadium’s sales center, according to the source familiar with the lease deal.

Costa Mesa Mayor Katrina Foley said in the statement that the city would welcome Spanos and his team as they transition to a new home base.

“Costa Mesa is prepared to graciously welcome his organization and his family of employees as they make us their home for their new headquarters, practice and training facility,” she said.