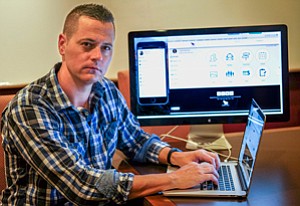 The mobile phone revolution already enables smartphone users to rent cars, book airplane seats, or lease apartments with the stroke of a finger. Now, thanks to a Long Beach company, they can stay in touch with their children the same way.

Kangarootime is streamlining child care services for parents and early education providers by automating checking in and out at day care centers, sending photos from classrooms, and digitizing paperwork with its cloud-based app.

The startup has signed up nearly 500 child care centers nationwide – 30 of them in Los Angeles County – since launching in January 2015, and founder Scott Wayman intends to double that number by the end of this year. The company also plans to nearly triple its employee count to 30 from the current 11 by 2017.

Kangarootime received $500,000 in seed funding from Boston investment firm Micro Capital last year and is on the lookout for new investors.

“We Uberized the classroom and automated this business,” said Wayman. “Our platform alleviates so much work and that means teachers can dedicate more time to a curriculum.”

Through the online app, teachers can track attendance, share notes, and send photos, while school administrators can manage classrooms and bill parents for tuition.

Wayman declined to disclose the company’s finances but said the app generates revenue by charging a 3 percent fee from all transactions using the software.

Personal tragedy prompted Wayman, 41, to come up with the idea to build the child care app.

He was 33 years old when both of his parents died in the same year, leaving him as the legal guardian of his 10-year-old brother.

While dealing with outdated enrollment systems at traditional child care centers, he came up with an idea to create software that would digitize the enrollment process and help parents monitor classrooms.

Parents can connect in real time with a teacher, scroll through a photo gallery, or check a lunch menu. The app also sends parents real-time updates and photos from the classroom. Instead of signing lots of papers as in the old days, parents can open the app and say “yes” to an online authorization form. A teacher sees a child’s face on their smartphone and approves the request. Wayman said the app helps teachers and school administrators save up to 40 hours a week.

The app offers an option for other family members to pick up a child from school without signing an authorization form. A friend can take a selfie and upload it to the app, while a parent can share a photo of that person and submit it to a center’s page, signing an online form.

Wayman said he hasn’t advertised the app, saying growth has largely come via word of mouth.

Renae Plant, director of Silver Lake preschool Camelot Kids, said it would be a good idea to streamline some services for childcare programs, however, her school prefers to keep paper documents on file.

“There are so many legalities that we have to deal with,” she said. “It’s outdated and can be improved, but we still have to have signatures and all the paperwork on file. That is necessary for us to be licensed with the state.”

Plant said she would welcome an app that helps parents stay in touch with teachers, but she is hesitant to completely rely on it, especially with matters that require a personal approach.

“We still have to have parents sign up some random piece of paper, especially when parents are divorced and try to figure who would pick up a child,” she said.

Wayman said the biggest challenge has been convincing parents that the digitized child care service is safe and that children’s private information is protected.

“We try to educate our customers that there is nothing to fear,” he said.

While the app alleviates labor for teachers, it’s also designed to help centers’ administrators by processing payments coming to each day care center.

“We know every dollar that comes to the center,” Wayman said. “Parents purchase something and they do it through the app. We become their biller and alleviate all that labor.”

Demand for apps that digitize child care services has been on the rise and Kangarootime is not the first company that aims to streamline preschool services in a single step.

That company’s founder, Dave Vasen, said Brightwheel, which works with preschools and early education programs, signs up parents and child care centers for free, but the firm plans to start charging users a fee by the end of the year.

When Brightwheel launched, some parents were concerned the app could take teachers’ attention away from the children. That concern quickly dissolved, Vasen said.

“We created the app in collaboration with teachers so they could work with the app and still keep their eyes on the kids.” he said. “The teachers never have to leave a classroom to connect with parents and that gives them more time to spend with kids.”