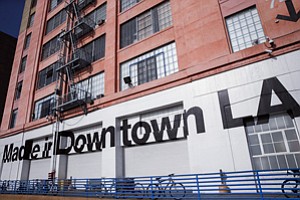 It is the stuff of great drama: A flawed young hero lands in Los Angeles and starts a business armed with ambition and $10,000 borrowed from his father. Powered by his vision and charisma, sales hit $600 million by the end of the first act.

But Dov Charney, founder of American Apparel Inc., has just seen the curtain fall on Act 2, an act which saw his company wrested from him and, within a year, file for bankruptcy protection. At the time trading was halted two weeks ago, it had a paltry market cap of around $20 million.

Now, speculation is rife about what Charney’s going to do in the third act.

He is a polarizing figure, one whose drive and intuition about what young people wanted in clothing engendered fierce loyalty among many former colleagues, suppliers and shareholders, some of whom are encouraging him to move on from American Apparel and start a new venture.

“There’s no reason why Dov, given the media attention he has, couldn’t build a brand pretty quickly,” said Michael Bigger, founder of New York’s Bigger Capital Fund, an American Apparel shareholder. “He’s done it once; there’s no reason why he couldn’t do it twice. He’s polarized people, and for brand building, that’s always very good because you gain attention. That’s how he built the American Apparel brand.”

Charney, 46, isn’t talking about what’s next, though it’s believed he has not yet given up hope of regaining control of and reviving American Apparel.

The company’s hard-to-replicate quirkiness is part of what attracted Bigger to invest in American Apparel. He said Charney’s genius is in managing and building a brand.

“What’s hard in that is gaining attention – finding the emotional message that connects with the customer and having the platform to be able to show that message in the world and to have people listen to you,” he said.

His fund’s first investment came in 2011, and at one time it owned 3.2 million American Apparel shares. After the board suspended Charney in June of last year, Bigger said that he sold nearly all of his shares. With Charney gone, he no longer trusted the board was looking out for shareholders’ best interests.

Former employees, shareholders and associates say another defining factor about Charney is that his drive to build the business was not about riches.

“Dov, like many founder-entrepreneurs, is not motivated by money,” said John Brooks, an American Apparel shareholder and a former business development executive at the company under Charney. “For him, it’s about continuing the mission.”

At the time of the bankruptcy filing, Charney’s 74.5 million shares were worth less than $8 million. That equity has been wiped out by the filing two weeks ago.

Charney’s creativity and brand-building ability is not without flaws, associates said. However, with the right partners – and if he alters some of his behavior – he could be a valuable asset to others looking to start and grow businesses.

Other entrepreneurs stand to gain, associates said, not just from Charney’s innate talent but from his experience building and running a global retail, wholesale and manufacturing business – and the hard, near-ruinous lessons he learned along the way.

Charney, born in Canada, started American Apparel in Los Angeles as a sweatshop-free manufacturer of comfortable casual clothing in 1998.

Its first retail shop opened in 2003 in Los Angeles, and the company still sells direct to consumers through 237 retail stores in 20 countries. During the company’s rise, American Apparel and Charney garnered countless awards and accolades – Ernst & Young named him Entrepreneur of the Year in 2004 – for creative marketing and brand-building, and successfully operating a vertically integrated company. It went public through a merger with a so-called blank-check company in early 2007, initially trading on the American Stock Exchange.

Much of the company’s growth was fed by sexually provocative advertisements, many overseen or photographed by Charney himself, that attracted both attention and criticism. Some of his sexual behavior with employees was highly publicized and spawned lawsuits but no formal criminal charges. Still, that history could dampen his chances of partnering with others as a consultant.

During that same period, the business positioned itself at the forefront of social issues, keeping its manufacturing local, paying living wages, supporting immigration reform and gay rights. Those moves resonated with customers and helped build a tight connection between Charney and his employees – which numbered 10,000 just a few years ago but lately has been listed at 9,000.

Those ties to his employees might be a mixed blessing for Charney.

“The thousands of jobs at stake is the reason why Dov will not give up on trying to take back the control,” said Jan Willem Hubner, former director of visual merchandising and store standards for American Apparel who worked at the company for 10 years. Hubner, a shareholder, has sued American Apparel charging fraudulent shareholder proxy statements.

The loyalty apparently runs both ways.

Keith Fink, a partner at L.A. law firm Fink & Steinberg who used to torment Charney with lawsuits alleging sexual improprieties but who now represents him in lawsuits he has brought against the company and its directors, said Charney has a group of former employees, colleagues and shareholders who would follow him into a new venture, if that’s the direction he chooses to take. Offers have already been extended, he noted.

Brooks agrees about the potential for starting over.

“Given the changes across the industries and platforms that American Apparel has exposure to, would it not make more sense to start again?” he said. “Many of the key creative and operational executives, the brain trust of American Apparel, sit benched in Los Angeles likely ready, willing and able to follow Dov back into the market.”

If Charney starts anew in the apparel business, he should probably change his approach to certain fundamentals, Brooks said. The new company should outsource manufacturing and distribution, leaving those areas to specialists, and have smaller, better-placed retail stores.

“I think this time around, the people funding him could help him with some administrative managers to take care of the details, because I think Dov is a little bit weak on that,” Bigger said. “I think he has a lot to offer, whether people like him or not. I know investors who would be willing to fund him in a new venture.”

But that would mean Charney would have to hand over control of the details, which would go against his nature and how he built and ran American Apparel, said Avi Mor, owner of Knit House, which supplies American Apparel with fabric for its winter lines.

A longtime friend of Charney, Mor described him as someone who made nearly every decision about the company. Mor said Charney’s genius was in his ability to identify fabrics and styles and make them into products that could fly off the shelves.

“Whatever you see in American Apparel is Dov, from beginning to end,” Mor said. “Every garment he creates himself, every little item. Even the machinery – he chooses everything. He did everything by himself.”

He said Charney regularly worked around the clock and would often take money from his personal savings to pay suppliers what was owed them if the company didn’t have cash on hand.

But before the next act starts, Charney will have to move beyond American Apparel. For now, friends and associates say he’s fixed on regaining control of his company.

“Hopefully he will come to the realization he has to move forward and build something else,” Bigger said. “If he does not regain American Apparel, it would be a shame to waste that talent on a pursuit that has no chance of coming to fruition. Eventually, you just have to cut the cord and do something new.”