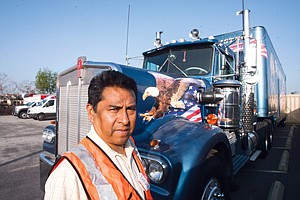 Marcos Rodriguez worked for Exel Direct Inc. for seven years, picking up goods from the ports of Los Angeles and Long Beach and hauling them inland. He drove a truck leased from Exel and worked for no other company during that time, but when a refrigerator he was delivering fell on his head in 2012, leaving him injured and unable to work, he said he was left out in the cold.

That’s because Rodriguez, like a slew of other truck drivers working at the ports, was classified as an independent contractor, not an employee, and Exel was not paying into the state’s workers’ compensation fund on his behalf.

His is among a number of cases that have set the latest battleground in the long-running struggle between truck drivers, many of whom want to unionize, and the trucking industry, which has thus far successfully resisted the effort.

Rodriguez is one of several disgruntled drivers who have turned to the court system, part of a new tactic union forces are using in their push to organize harbor truck drivers. The move to litigation comes after job actions by port drivers failed to force a shift in the practice of hiring drivers as independent contractors.

Though Rodriguez’s claims are specific, his case is among many filed in recent months addressing the alleged misclassification issue. His attorney, Brian Kabateck, said the case highlights just one of the many problems associated with what he considers wrongful misclassification.

“His case is very unique because he had an injury that under California law would be considered a workers’ comp injury,” Kabateck said. “However, there is an open question here, and we’re contemplating whether to file a class-action for the truck drivers who have been paying into these policies. The bigger issue, in my mind, is the general misclassification of these drivers and the fact that these companies owe them that money.”

It is an argument that has the support of the International Brotherhood of Teamsters, which has tried in vain to organize port truckers.

“The problems that are plaguing the ports are legally based,” said Barbara Maynard, a spokeswoman for a campaign called Justice for Port Drivers organized by the Teamsters. “There are two specific ways of helping to solve the problem – you can sue and you can strike.”

That strategy has been noted by the trucking industry, said Weston LaBar, executive director of the Harbor Trucking Association in Long Beach.

“The misclassification legal issues that you’re seeing are definitely a concerted effort to create a model for employee drivers,” LaBar said. “That’s their strategy right now.”

The strategy got a boost Jan. 1, when a state law amending the labor code to increase liability for companies that hire contract workers took effect.

The law, AB 1897, allows independent contractors for the first time to sue employers for alleged insurance, wage and hour violations. Previously, only direct employees could file those claims.

Gary Toebben, chief executive of the Los Angeles Area Chamber of Commerce, said he anticipates that the new law will prompt even more legal action.

“Undoubtedly, it will lead to more lawsuits,” Toebben said. “Most businesses do a good job already of screening the companies that provide temporary employees for them, but certainly they’re going to have to be a lot more careful in the future.”

Exel, a $4.6 billion logistics company headquartered in Westerville, Ohio, hired Rodriguez as a contract driver in 2005. Because he wasn’t classified as an employee, Exel would not provide workers’ compensation insurance. Instead, it required him to buy an occupational accident policy from Zurich American Insurance Co., according to a document filed in Los Angeles Superior Court last summer.

Rodriguez claims Exel dictated his workday, much like a traditional employer-employee relationship. For instance, he says in his filings, the company owned and maintained the truck he drove, set his pay and schedule, gave him a drug test and even required him to wear a uniform to work each day.

Exel deducted occupational accident policy premiums from each paycheck, his filing claims, even though he arranged for the Zurich policy himself. Rodriguez sued Exel and Zurich after the insurance company denied his claim.

Exel, in a response filed in court, denied any involvement in Zurich’s decision to handle the claim.

“(Rodriguez) filed a claim for workers’ compensation benefits with respect to his alleged injuries, and therefore disavowed his rights to coverage under the occupational accident insurance policy,” Exel said in a court document.

Representatives of Exel did not respond to requests for comment.

Alfredo Gonzalez, another longtime driver under contract with Harbor Rail Transport, said he had a similar experience to Rodriguez’s and insists they’re far from alone.

Gonzalez, a Spanish speaker, said he was forced to sign a contract requiring him to pay into an insurance policy but was only given documents in English. He said he didn’t think anything of it until he fell from a 20-foot chassis in September, injuring his back.

“You don’t know if the insurance really works because sometimes you don’t need it,” he said through a translator. “When I first got injured, they sent me to a place and treated me right away. They gave me some pills and they sent me home. But two weeks after, I (was) still dealing with the same problem.”

That’s when Gonzalez requested physical therapy, only to be told his insurance wouldn’t cover it. A lot of trucking companies, he said, don’t provide adequate insurance.

So far, state court justices have ruled in favor of drivers who claim to be misclassified. A judge last month awarded seven drivers $2 million after they accused their employer, Pacer Cartage Inc., of organizing a wage-theft scheme by charging workers inflated prices to lease their trucks.

Kabateck said the court’s decision in that case, combined with the labor code amendment, gives him more confidence in the Rodriguez case.

“It is not going to end well for the trucking companies,” he said. “Whatever your political view is on these issues, one thing that can’t be disputed is the law in California is clear. The labor law is very employee oriented. Regardless of whether people think that’s a good or bad thing, that’s just the fact.”

“Is this a boost to plaintiffs and their litigation?” Kun said. “Absolutely. This is a statute, I think, we’ll be talking about more a year from now – or two years from now – when lawsuits relating to those workers are going to revolve more around the statute.”

That’s the frustrating reality for the trucking industry, said the trucking association’s LaBar. In an ideal world, each company should implement a business model that works best for them.

“We need to get those containers moving and the best way to make that happen is if we’re paying people for productivity,” LaBar said. “When congestion’s not there and turn times are great, nobody wants to be an employee because they’re making so much money.”