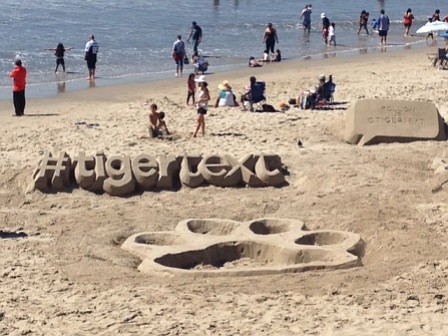 The TigerText sand sculpture in Santa Monica was created during a company party celebrating the launch of the redesigned app. Photo courtesy of TigerText.

TigerText began as a consumer app for disappearing texts but quickly found a niche as a tool for large companies and hospitals as a secure messaging network.

As the Santa Monica startup's business changed, it developed separate apps for everyday texters and its business customers. But TigerText on Thursday unveiled a redesigned system that has combined both the consumer and enterprise apps into one freemium product.

Now anyone can download the TigerText app for free and then create a secure network to message co-workers and send files. The company has also created a web messenger so users can have access to those conversations both online and on mobile devices.

A group of colleagues could use the app to message each other without ever paying for the service. But TigerText makes money if a business decides it wants to take over that network or set up a network of its own.

This enterprise feature allows the business to control which employees have access to the messaging network, archive important data sent through the app, and track employee productivity.

Brad Brooks, TigerText's co-founder and chief executive, said that combining the consumer and enterprise apps should help TigerText gain more users. Instead of first selling the app to IT departments, TigerText can now get employees hooked on its secure messaging and then convert the business into a customer.

"We're interested in seeing what traction we might get," Brooks said. "A large government organization just had all its employees join the app. We never would have guessed that they would be a customer."

According to Brooks, more than 10,000 businesses have signed up for TigerText's freemium service since it began testing the new business model two months ago. The company reports that more than 3 million people have downloaded the app.

Brooks started TigerText in 2010 and has since raised more than $10 million in funding and grown the business to nearly 60 employees.

Brooks said he believes the market for his product will only continue to grow as more people turn to text messaging to communicate sensitive information.

"Our current business is doing well and growing fast," he said. "We're very comfortable that the freemium model can sustain a big business."