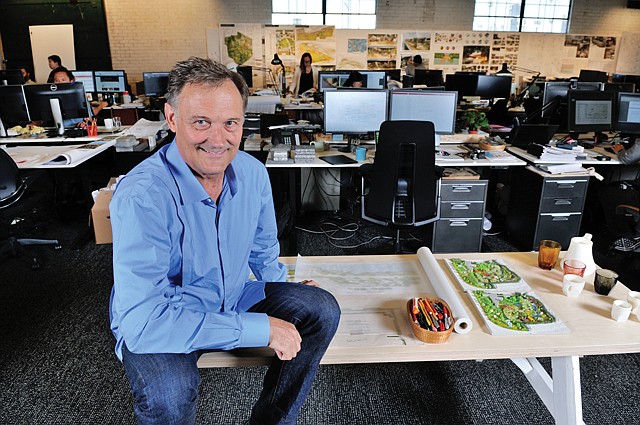 There are plenty of design models and product prototypes on display in architecture firm Rios Clementi Hale Studios’ 30,000-square-foot space in Leimert Park. The studio relocated to the neighborhood from its former headquarters on Larchmont Boulevard in 2017.

But today, architect Mark Rios, one of the studio’s creative directors, is himself serving as a model for an out-of-the-box project: the Guillermo shirt, the studio’s first effort in clothing design.

The shirts are named for Rios’ father, Guillermo Rios, who is descended from a long line of Mexican rancheros who wore traditional guayabera work shirts. The garments are noted for their pleats, adjustable vents and large pockets, and are meant to be worn untucked. The Guillermo represents a modern take on the shirts.

The architecture studio is known for such high-profile projects as downtown’s Row DTLA complex; its design for Grand Park, which serves as a connector between City Hall and downtown cultural institutions; and the $41 million renovation of the Music Center Plaza. The 53-year-old plaza officially reopens in late August.

Still, during a recent Business Journal visit, architect Rios seemed most excited by smaller efforts such as the shirts and the studio’s notNeutral line of glassware and food service items.

“I love (the shirt) because you can wear it anywhere; you dress it up or you dress it down, (and) I always think of my dad when I’m wearing it,” said Rios, sporting the light blue version with blue jeans.

“I love it because it suggests the possibility that we are not locked into designing one kind of thing,” Rios added. “The design process allows us to solve lots of problems.” He pledges that women’s clothing designs are next on his list.

Rios likes to let materials suggest ideas, pointing to a stack of lava rock squares exhibiting a variety of hues and textures. He acquired the samples from one of the many dealers that stop by the studio to exhibit their wares.

“If I find a strange or odd building material that I’m intrigued with, I just have it hang out, and all of a sudden the possibilities open up,” he said. “This is really an open workshop, an experimental workshop. And it is messy — it is deliberately messy.”

After 35 years in the design business, the Fullerton native describes his personal and design style as clean, thoughtful and utilitarian rather than ostentatious. And, he adds, “mildly youthful, not in a way that I’m trying to be someone I’m not — I’m 63 years old — but in not accepting the norms of society.”

Today’s L.A. is a good place to question those norms. “We are a very inclusive architectural community. We don’t have set styles,” Rios said.