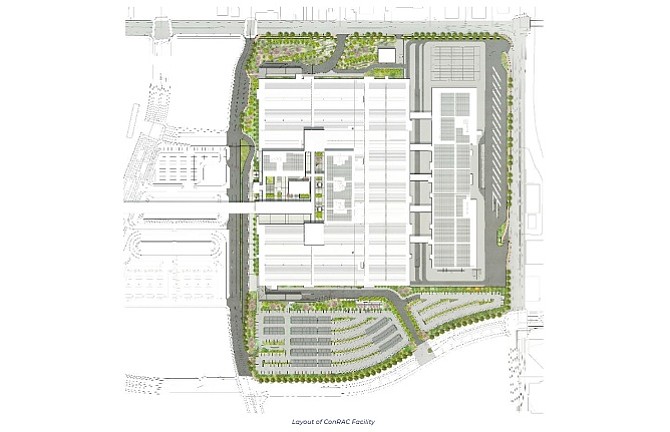 The layout of the consolidated car rental facility at LAX

The Los Angeles City Council on Oct. 31 unanimously approved a $2 billion contract for a consortium of 11 companies to build and operate a consolidated car rental facility near Los Angeles International Airport.

The 28-year contract represents the final cornerstone of the nearly $6 billion plan to improve ground access to LAX. Earlier this year, the Council approved a $4.9 billion contract to another consortium to design, build and operate an automated people mover system connecting the car rental facility with the airport terminals, as well as a $209 million contract to build a parking structure at an intermodal facility connecting bus and rail transit to the people mover.

“Today’s approval is a historic investment in our infrastructure — a milestone that will create middle-class jobs, reduce traffic congestion, and deliver a world-class experience for travelers,” Los Angeles Mayor Eric Garcetti said in a statement.

The consortium for the consolidated car rental facility, known as L.A. Gateway Partners, is led by PCL Construction Services Inc. of Denver as the general contractor. The main local company on the team is downtown-based design firm A.C. Martin Partners.

The consolidated car rental facility, which has an estimated construction cost of $1 billion, will be located two miles east of LAX, next to the 405 Freeway; the planned automated people mover will connect the facility to the airport terminals.

When completed sometime in 2023, the facility will consolidate operations of more than a dozen rental car companies that are now scattered throughout Westchester, El Segundo and other nearby airport communities. The facility and people mover will also eliminate the need for the hundreds of car rental shuttles now circulating through and around the airport.