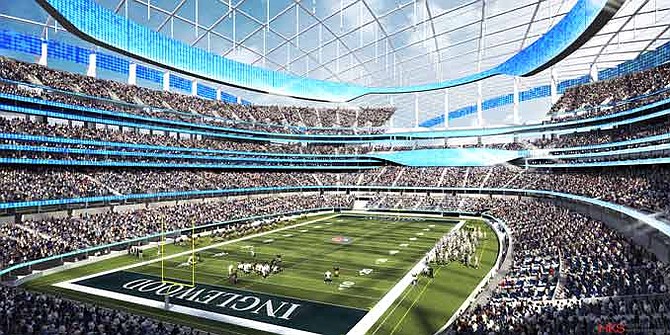 Rendering of the proposed football stadium in Inglewood.

The Los Angeles Sports & Entertainment Commission has successfully landed the bid for the 2023 College Football Playoff National Championship game, which will be played in the new NFL stadium now under construction in Inglewood.

The stadium, anticipated to open in 2020, would host the first College Football National Championship to be played in Los Angeles.

“As the entertainment capital of the world, Los Angeles is ready to deliver a College Football Playoff National Championship like no city has ever before,” Kathryn Schloessman, president of Los Angeles Sports & Entertainment Commission, said in a release. “This successful bid reaffirms L.A.’s status as one of the most desirable destinations for hosting global sporting events.”

The Los Angeles Host Committee will organize and lead the event and work closely with the College Football Playoff. Early expectations are that 31,000 hotel room nights will be booked as a result, said in a press release.

“The new stadium and district we are building at Hollywood Park will transform the area into a year-round sports and entertainment destination,” Stan Kroenke, owner of the Los Angeles Rams, said in the release announcing the award. “We are excited to add the College Football Playoff National Championship to the roster of premier events at our stadium including the Super Bowl and the Opening and Closing ceremonies of the 2028 Olympics.”

Prior college football championships, under the auspices of the Bowl Championship Series, were played at the Rose Bowl in 2002, 2006, 2010 and 2014.