Cargo numbers rose sharply for the Port of Long Beach in September as the port recorded its heaviest traffic for that month since 2007.

Allied Feather & Down hopes to goose sales to clothing makers with its new rules on treatment of birds.

Trucking: Vision rolls into bankruptcy after burning through millions in grants. 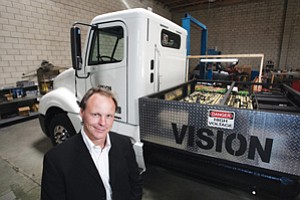 Mattel Inc. remained profitable during the third quarter despite an 8 percent decline in worldwide sales, the company reported Thursday.

West Coast port operators and dock workers have not had a contract since June, and retailers are starting to worry about whether they will get their shipments in time for the holiday shopping rush.

Private membership airline Surf Air announced Monday that it will expand its service both north and south of Los Angeles – to Carlsbad in November and to Oakland in December.