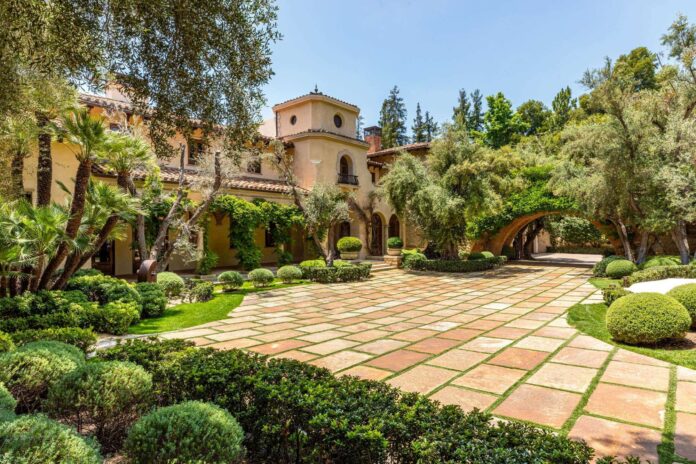 Since its inception in 1993, Beverly Hills-based brokerage Hilton & Hyland Real Estate Inc. has cemented itself as one of the top names in luxury real estate.
The firm hit $4.3 billion in sales last year, up from $3.5 billion the year prior.

The privately held, single-office company was founded by Rick Hilton and Jeff Hyland.
Hyland passed away earlier this year after battling cancer, but friends and colleagues say his presence will remain at the brokerage.

“In 30 years, we never had a disagreement. I can’t tell you what a great partner he was, and I miss him every day,” Hilton said.
Linda May, No. 13 on the Business Journal’s list of top agents by L.A. volume with $559 million of sales in Los Angeles last year, has been with the company for six years and said Hyland and the brokerage’s reputation drew her to the company.

David Kramer, No. 34 on the Business Journal’s list of top agents by L.A. sales volume with $308 million of sales in L.A. last year, who has been with the company for 18 years, called Hyland a “titan of industry” who “changed the business.”

Hilton is the grandson of legendary hotelier, Hilton Hotels and Resorts founder Conrad Hilton.
Hilton said Hyland was friends with his older brother and he decided to approach him about starting Hilton & Hyland.

“I had approached Jeff and said, ‘If you ever want to do something with residential, let me know’ and a few years later he called me up,” Hilton said.
The company quickly scaled up.

“We started in Century City with about five agents and then we moved three or four times and now we’re in a big building on Canon (in Beverly Hills),” Hilton said. “It’s been a lot of hard work in creating what I consider to be a globally recognized brand and we always had a feeling that our word was our bond and that it takes years to develop a certain reputation and minutes to destroy it, and we were both on the same wavelength.”
Today, the company has more than 140 agents and 12 employees.

Unlike other brokerages which have franchised locations or grown to additional offices, Hilton & Hyland only has one office.
Hilton said the firm made a conscientious choice to be careful about how it grew when hiring.
“We were very careful about how we recruited,” Hilton said. “We treated it almost like a country club.”

He added that other firms would “hire anyone with a pulse” but he and Hyland wanted to be more selective and make sure agents brought to the company were the right fit.
May said the firm’s reputation as the leader in luxury real estate was what made her want to join.

“It became apparent while I was at another firm that Hilton & Hyland was the leader in luxury and with the top trophy houses, they were far and above representing the most significant houses in the city,” she said. “My own listings were of that magnitude … it just seemed that for me to represent my clients in the best possible way I needed to be at Hilton & Hyland. They had the most significant marketing platform of any company in the city. When I started their relationship (was) with Christie’s International and now it’s with Forbes.”

Hilton & Hyland has been involved in some of L.A.’s most iconic property sales. In 2011, the brokerage helped sell Spelling Manor, also known simply as the Manor, in Holmby Hills for $85 million to Formula One heiress Petra Ecclestone.
It then sold again in 2019 for $120 million.

The property is back on the market and Hilton & Hyland has the $165 million listing.
Hilton & Hyland was also one of the brokerages behind the sale of “The Beverly Hillbillies” mansion, also known as the Chartwell Estate. The property sold for $150 million in 2019.
Hilton & Hyland is the founding affiliate and only Los Angeles member of Forbes Global Properties.

“That was something that Jeff helped create,” Hilton said. “We felt what is a better name than Forbes to align ourselves with?”
Forbes Global Properties was established in 2020 as a group of top real estate brokerages. It is essentially a listing platform for high-end homes.
Hilton & Hyland also has a relationship with Luxury Portfolio International.

Hilton said many of the agents have stayed because of the tools offered to brokers, including help with marketing and a great atmosphere.
May agreed that the brokerage does a great job marketing properties and added that having so many top agents under one roof was a benefit as well.

“We really have the most innovative marketing services and creative advertising and huge digital presence in today’s world,” May said.

“It was my most stellar year,” May said, adding that 2022 was off to a promising start with people from such cities as New York and San Francisco looking to buy in Los Angeles.
Hilton said he expects a great future ahead for his brokerage.
“L.A. is a great market, and we dominate the high end of the market, and we like that position in the marketplace and think a lot of wealth has been created and people will want to be in L.A.,” Hilton said.

Despite doing well, Hilton has no plans to open additional offices.
“We like the idea of being a boutique and small and (being able to) give more personalized service, and it sets us apart,” he said. “We have a globally recognized brand, we have a history of professionalism and integrity and it’s not just about the money. We all have pride in where we work and what we do.”

And agents agree that Hyland’s presence will continue to be felt as the company moves forward.
“So many people have been there so long that Jeff is still in this company in us,” Kramer said.