Kirk Marckwald says switching American train lines to electricity would burn too much money and time.

Superdock Is the Best Way to Save the Day at the Port of L.A.

Richard Risemberg hopes to make a splash at the ports with a proposal for a vertically stacked Superdock.

Extending the Red Line Will Be Good for Los Angeles

Plans for a "Subway to the Sea" the extension of the Red Line to Santa Monica will help ease congestion, according to Richard Risemberg.

OP-ED: Razing the freeway would be the best path to easing traffic between Long Beach and San Gabriel Valley.

Richard Risemberg thinks the Long Beach (710) Freeway only serves to drive up traffic, so he offers a solution.

Ride the Big Three Automakers Out of Town on a Rail

Instead of bailing out the Big Three automakers, money should be spent on mass transit, according to Richard Risemberg.

Los Angeles Needs to Get in Gear on ‘Bicycle Boulevard’

Getting in Gear on Bikes

OP-ED: Arguments against sharing the road with cyclists should no longer be driving the discussion.

Taxes must be reassesed to make sure motorists pay more for using and damaging L.A.’s streets.

Motorists are leaving Los Angeles in the hole on street repairs, according to Richard Risemberg.

High wages and strong unions are good for business and the economy, contends Richard Risemberg.

Richard Risemberg is hoping to fast track a plan to switch the U.S. rail system to electric-diesel trains.

Backers of Housing Bubble Were Living in Dreamland

The burst housing bubble has brought reality back to dreamland, writes Richard Risemberg.

How Would the Ports Stack Up?

High Speed Rail Could Be Good for State Transportation

Some of the points Adam B. Summers made in his op-ed of Nov. 26 ("It's Time to Stop California's Plans for High-Speed Rail") deserve rebuttal.

Bike-sharing firm looks to get in gear without public money

Bike Nation tries to get its cycle-sharing program rolling without public money. 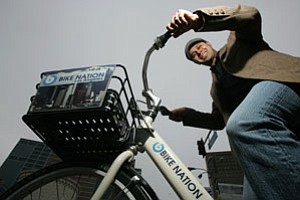