Downtown-based BLVD Hospitality has made big strides since its founding in 2008.
The company has grown dramatically and its portfolio of finished or under-development properties is valued at roughly $500 million. That number is closer to $1 billion when the firm’s other completed projects are taken into consideration.

Some of BLVD’s most noteworthy projects are the Ace Hotel and CitizenM hotel, both located downtown. BLVD is also the co-owner of the iconic Georgian Hotel in Santa Monica, which is being updated.

Jon Blanchard, BLVD co-founder and chief executive, is looking to diversify further, while also continuing to develop and improve upon existing hospitality assets.
“Ever since I was young, I’ve always been amazed and interested in what goes on inside a hotel,” Blanchard said of the company’s hospitality focus. “It’s always intrigued me, all the different people that come and go every day and the different experiences people have.”

Blanchard has long been active in downtown, with the historic Ace Hotel being one of the projects he is best known for.
The property, which was originally built in 1927 to house the United Artists film studio, run by Charlie Chaplin and associates, reopened in its current form in 2014.

It had also gone through iterations as the California Petroleum Corp. Building and the Texaco Building. It was at one time used by televangelist Gene Scott.
“In some ways, they (BLVD) really embody the kind of innovative, creative developer that has really defined downtown’s renaissance,” said Nick Griffin, president of the Downtown Center Business Improvement District.

“They’ve done quite a few really flagship projects for downtown, ones that are really definitive of what downtown has become. It started with the Ace Hotel, which was a big part of the renaissance to begin with and was a catalyst for the growth on Broadway.”
Other BLVD projects in downtown include Soho Warehouse, a space leased by London-based social club Soho House, a CitizenM Hotel and the Hoxton Hotel.

James Stockdale, an executive vice president and hotel expert at Jones Lang LaSalle Inc., said that downtown has been “in recovery mode” since the Covid-19 pandemic.
The area, he said, previously saw a large amount of demand from conventions and business travel, which has taken longer to come back than leisure travel.

“The ground is fertile for downtown, we just need to get back to normal,” Stockdale said. “The market continues to pick up but we’re not back to 2019 levels. We’re ahead of where we were the summer of ’21. Downtown will continue to get back, it’s just going to take a little bit longer.”

One of BLVD’s most recent projects, the CitizenM hotel in downtown, is also one of its most unique because of the way it was built: using modular construction.
With modular construction, units are fabricated in a remote factory while the site is being worked on simultaneously.

“The reason that project is so significant to us is that it’s the first high-rise modular construction hotel ever approved in the city of Los Angeles,” Blanchard said. “Really, what that means is that when you’re doing modular construction, there are prefabricated rooms, almost like a container. They get built in a factory and then they get shipped to us here and they go up like Legos and a crane stacks them on top of each other with the interiors already completely built out.”

The project was completed last year.
Blanchard called modular projects “a very big undertaking,” adding that both the state and local jurisdictions are involved in such projects.
Still, he said it was a great option because it was more environmentally conscious and saved time. Experts agree that many developers are looking at modular now as a way to save on both the time and money associated with traditional construction.

Josh Kimmel, a vice president at Project Management Advisors Inc., said there was a lot of interest from developers in modular construction. Still, he said the method had some “perceived risks” since it’s newer and does not always save the amount of money some developers expect.
“Right now, in today’s modular world, we are seeing time savings but not necessarily cost savings,” he said.

But Blanchard hopes more such projects are on the way.
“We’re hopeful that my great team, and working with the city and county, paved the way for others to have a smoother process, whether it’s low rise or high rise when it comes to modular building,” Blanchard said.

In 2020, BLVD, along with partners Global Mutual and ESI Ventures, purchased the iconic Georgian Hotel on Ocean Avenue in Santa Monica.
The companies recently started renovating the property, which is expected to be completed later this year. It was initially built in 1933. 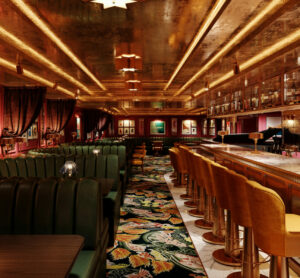 “We are redoing the 84 guest rooms and suites and getting them quite an extensive upgrade and are completely reimagining all of the public spaces,” Blanchard said.
The property will have two restaurants, two bars and an outdoor veranda.
The Georgian will remain an independent hotel, BLVD’s first hotel without a brand affiliation.

Blanchard called the updates a “passion project,” adding that the property is “one of the most iconic buildings in Santa Monica.”
JLL’s Stockdale added that Santa Monica is one of the highest-demand submarkets in the county and was seeing a lot of interest from investors.

“Santa Monica has always been one of the strongest-performing submarkets in the L.A. area and the pandemic hasn’t changed that,” he said.
Revenue per available room as of March 2022, he said, outpaced March 2019 by 7.7%.
Stockdale added that supply in Santa Monica is incredibly tight and Coastal Commission project approvals can be tricky, leading to strong fundamentals for existing properties.

BLVD will continue to do more hospitality projects, but Blanchard said the company would also be diversifying its portfolio and working on more multifamily projects in the future.
“It’s something we’re looking heavily at and will be a chunk of our portfolio going forward,” Blanchard said, estimating that one-third of BLVD’s portfolio would be multifamily properties in the future, especially ground-up development.

In addition to its L.A. stronghold, BLVD is looking at Orange County and projects in major Western cities that have seen large population growth.
“We will continue to grow in the hotel space in all of Southern California and west of the Mississippi and we’re going to be focusing a lot heavier on multifamily and continuing to look for amazing opportunities that hopefully people will enjoy,” he said.