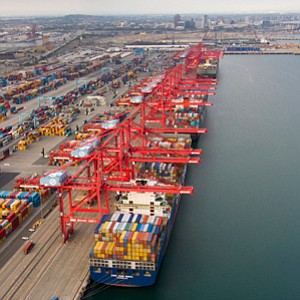 Ships loaded with cargo were sitting directionless off the California coast Wednesday after Hanjin Shipping filed for bankruptcy and ceased operations.

Hanjin Shipping Co. Ltd. filed for bankruptcy protection Wednesday after negotiations with creditors failed, sinking the seventh-largest cargo container carrier in the world and one of the largest shippers at the Port of Long Beach.

Hanjin Shipping Co. Ltd., one of the largest cargo carriers at the Port of Long Beach, may be headed for bankruptcy after its creditors reportedly rejected a restructuring plan Tuesday.

Hanjin Shipping’s creditors have moved up their meeting to consider whether the cargo carrier’s restructuring plan is enough to prevent the company from facing bankruptcy and court receivership.

SHIPPING: Bankruptcy of Hanjin could hurt tide of cargo at Long Beach port.

Embattled South Korean cargo container carrier Hanjin Shipping Co. Ltd. should soon know whether it will avoid bankruptcy as it approaches a Sept. 4 deadline for its $1.1 billion liquidity plan.