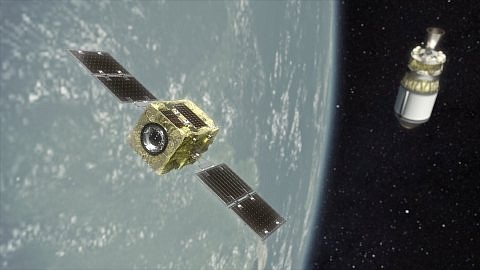 The launch is part of the Japan Aerospace Exploration Agency’s project to remove large-scale debris from orbit.

“Reliable and commercially viable launch vehicles like Rocket Lab’s Electron rocket enable frequent and flexible access to space, allowing us to advance our on-orbit services which are fundamental to the growth of the space infrastructure and economy,” Nobu Okada, founder and chief executive of Astroscale, said in a statement.

Peter Beck, Rocket Lab’s founder and chief executive, said in a statement that deorbiting debris is a “highly complex” task that requires exact precision, as objects in orbit travel more than 14,500 miles per hour. Rocket Lab’s Electron Kick Stage has performed 18 missions with this precision, he said.

“The ability to actively remove satellites and debris from orbit at the end of their operational life will likely play a key role in ensuring a sustainable space environment for the future, so we’re delighted to enable Astroscale to demonstrate new and innovative solutions in this field,” Beck said in a statement.

For Rocket Lab, the contract is the latest in a string of deals. On Sept. 8, the company announced a contract to deploy a constellation of 25 satellites over five missions for French startup satellite operator Kinéis. The first launch is scheduled for the second quarter of 2023