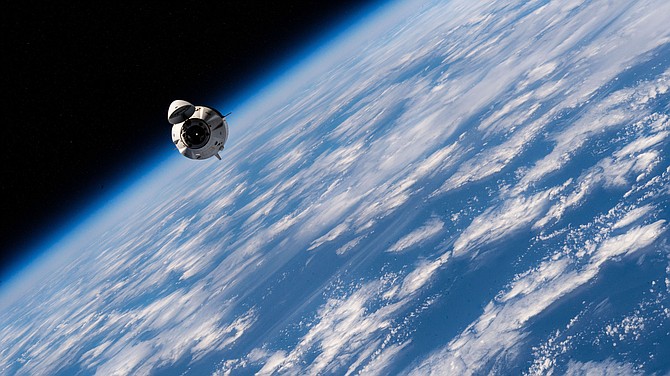 Business continues to look up for Space Exploration Technologies Corp., which won a recent court case and completed another two missions successfully this week.

The Hawthorne-based aerospace giant brought NASA astronauts who had spent six months on the International Space Station back to Earth as a part of its Crew-2 mission.

The Dragon spacecraft detached from the space station at 11:05 a.m. on Nov. 8, landing in the Gulf of Mexico eight hours later at around 7:30 p.m. Aboard the spacecraft were NASA astronauts Shane Kimbrough and Megan McArthur, Japan Aerospace Exploration Agency astronaut Akihiko Hoshide and European Space Agency astronaut Thomas Pesquet, who were first deployed to the space station on April 23 from Launch Complex 39A at Kennedy Space Center in Florida.

The crew was originally set to depart from the space station on Nov. 6 but the return flight was delayed due to unfavorable weather conditions.

The mission is the second crewed mission performed by SpaceX’s Crew Dragon and Falcon 9 as part of NASA’s Commercial Crew Program.

The mission marks SpaceX’s fifth human spaceflight mission since May 2020.

The Crew-3 launch was delayed several times due to unfavorable weather, as well as what NASA said was a “minor medical issue” unrelated to Covid-19 with one of its astronauts. The launch was originally scheduled for Oct. 30.

The crew is expected to remain at the space station for several months.

“Regular, long-duration commercial crew rotation missions enable NASA to continue the important research and technology investigations taking place aboard the station,” NASA said in a press release on Nov. 4. “Such research benefits people on Earth and lays the groundwork for future exploration of the moon and Mars, starting with the agency’s Artemis missions.”

The Commercial Crew Program is just one facet of SpaceX’s deep partnership with NASA. The company and the agency are also working to send people to the moon.

On Nov. 4, SpaceX and NASA got the greenlight to move forward with their partnership to create a human lunar landing system after a federal judge ruled in their favor in a lawsuit filed by Jeff Bezos’ space company, Blue Origin, protesting the contract.

The contract, first awarded to SpaceX in April and delayed by several efforts by Blue Origin, is worth $2.9 billion. The Human Landing System project is part of the Artemis program, which aims to land astronauts on the moon for the first time in more than 50 years. The program’s goal is to establish “long-term human-robotic presence” on and around the moon and to eventually reach Mars.

NASA said in a statement that it would resume work on the project with SpaceX “as soon as possible.”

“Through Artemis missions, NASA will lead the world in landing the first woman and first person of color on the lunar surface, conduct extensive operations on and around the moon, and get ready for human missions to Mars,” the agency said in a statement.