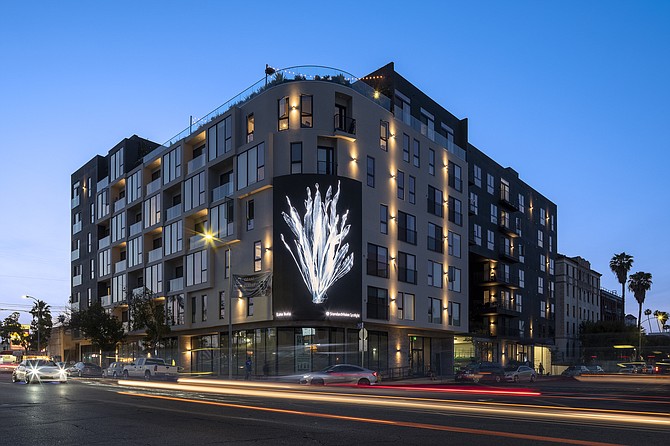 Mariposa on 3rd. in Koreatown

A recently completed multifamily building in Koreatown has received a $41.5 million mortgage loan.

The 122-unit Mariposa on 3rd, located at 269 S. Mariposa Ave., has a mix of one- and two-bedroom apartments. It also has a fitness center, rooftop terrace, pet washing station, clubhouse, parking and 4,800 square feet of ground-level retail.

The floating-rate loan has an initial term of three years but can be extended for two additional years.

CBRE Group Inc. was the lender. The borrower was not disclosed.

“Mariposa on 3rd was delivered last year and is nearly 90% occupied already. We believe that the strong initial interest and leasing activity at the property are due to its thoughtful finishes, useful amenities and its ideal location in Koreatown," Charles Kim, managing director for CBRE Global Investors, said in a statement.

"The building is walkable to some of the area’s best dining and entertainment and only a short commute to Downtown L.A. and the city’s other popular employment hubs,” he added.

There have been other notable multifamily loans as of late. Earlier this year, six apartment buildings in Beverly Hills, West Hollywood and North Hollywood received $56.5 million in loans.

The owner of the 210-unit portfolio was unnamed. Mortgage company Venture West Funding Inc., based in El Segundo, arranged the loan from First Foundation Bank.

Also this year, Capital One provided $35.7 million in loans to refinance 17 apartment properties in Southern California in Covina, El Monte, Lynwood, Pacoima, Torrance, and Whittier, and in San Diego, Riverside, and Orange Counties.

The buildings range from five to 54 units and are owned by Positive Investments Inc., based in Arcadia.

In September, brokerage Jones Lang LaSalle Inc. announced it had arranged a nearly $57 million loan for a multifamily portfolio on the Westside.