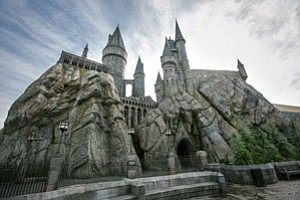 Universal Studios Hollywood is scheduled to reopen on April 16, more than a year after it was closed because of the Covid-19 pandemic.

When the theme park opens it will also launch a ride based on the movie “The Secret Life of Pets.” The attraction was originally scheduled to open in March 2020.

Only California residents will be allowed to visit the park, which will operate at limited capacity to comply with state guidelines. Party sizes will be capped at a maximum of three households and 10 people.

Tickets will be available online starting April 8. The park will open on April 15 for season pass holders before welcoming the general public a day later.

Universal Studios Hollywood said it will require face coverings and physical distancing throughout the park, which will undergo consistent sanitizing and offer contactless payment whenever possible.

NBCUniversal’s theme parks division was hit hard by the pandemic. Revenue for the unit tumbled nearly 69% in fiscal 2020 to $1.85 billion from $5.9 billion in fiscal 2019, according to parent company Comcast’s latest earnings report.

For the fiscal fourth quarter, revenue for the division fell 63% to $579 million from $1.56 billion year over year.

“With the vaccines rolling out throughout the world, we are optimistic that the parts of our business that had been most impacted will soon be back on a path towards growth,” Brian Roberts, chairman and chief executive of Comcast corp. said in the company’s Jan. 28 earnings report.