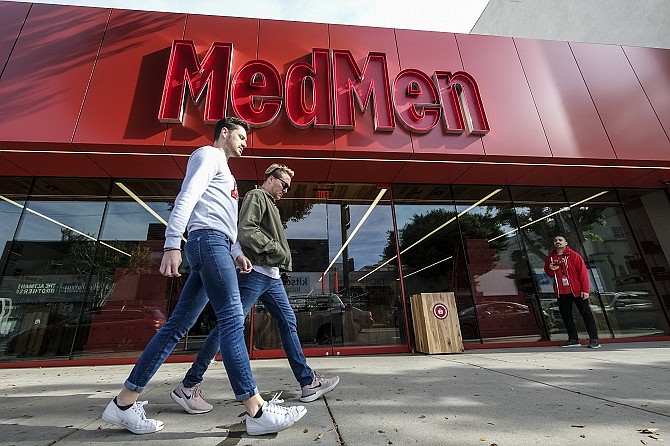 The Beverly Hills MedMen store at 110 S. Robertson Blvd. is one of 33 U.S. locations. The company launched a delivery service in 2020. Photo by Ringo Chiu.

Lynch joined MedMen as interim CEO and chief restructuring officer in March 2020, a few months after Adam Bierman stepped down as chief executive at the company he launched a decade earlier.

Restructuring the cannabis operator will be a tall order. The company has struggled to retain senior executives and continues to chase profitability.

The company said that a $9.7 million loss in its third quarter was its “best net loss in the company’s history.”

MedMen, which became the first U.S.-based cannabis company to go public on the Canadian Securities Exchange in 2018, has seen its share of challenges.

The company has laid off a large chunk of its workforce. It canceled a $682 million strategic acquisition of PharmaCann in October 2019 to focus on its retail operations in California and other states. And it has had a revolving door for chief financial officers.

MedMen's highest profile CFO was Michael Kramer, who helped launch Apple Inc.’s retail stores. His mission was to right the ship at one of the fledgling industry’s most ambitious companies and to prevent it from burning cash as it pursued an aggressive expansion.

The expansion has since been slowed.

Lynch is a partner and senior managing director at SierraConstellation Partners, a downtown-based interim management and advisory firm. He previously served as chairman and CEO of Hollywood-based lingerie retailer Frederick’s of Hollywood Group Inc., an arm of New York-based Authentic Brands Group LLC.

Lynch also served as interim CEO of Conshohocken, Pa.-based wedding dress and gown company David’s Bridal, which he led out of bankruptcy.

With Frederick’s, Lynch led an out-of-court financial and operational restructuring which culminated in a sale to hedge fund investor Phil Falcone’s HRG Group in 2014.