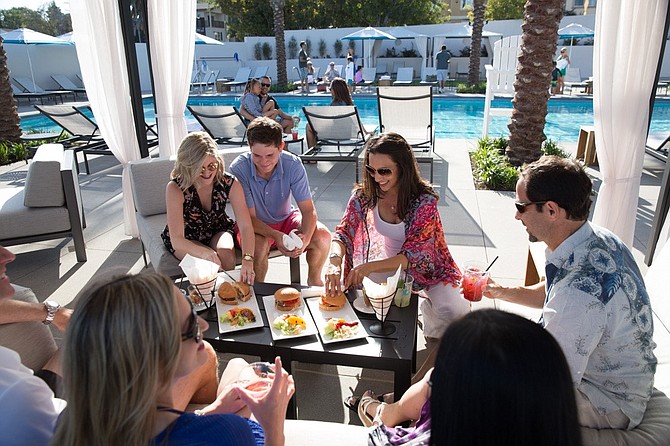 Rob Rubano, an executive managing director at Cushman & Wakefield Inc., is a member at two private social clubs in Los Angeles — Soho House and the San Vicente Bungalows. He visited both frequently during the pandemic.

“I felt comfortable with the protocols they had. If anything, the community became even tighter,” he said. “People had an exclusive place they could go to. It only strengthened the model.”

Los Angeles had already emerged as a hotbed for these clubs before Covid-19. Demand for some properties increased during the pandemic as affluent Angelenos, especially young professionals, sought out local getaways in relatively safe environments with high-end amenities.

Now, with the economy reopening, industry experts said the clubs are poised for greater growth.

Britely, tucked inside the newly opened Pendry West Hollywood on the Sunset Strip, is the newest inductee to the private social club scene. It had a soft opening in April, following the arrival of the San Vicente Bungalows in West Hollywood, Spring Place in Beverly Hills and several local outposts of Soho House, which have all opened in the past several years.

“It’s been such a rewarding adventure. The whole goal of the Britely was to build a community after being locked in for so long to finally be able to see people, gathering together and spending time together and getting to know each other. It’s a real treat,” said Estelle Lacroix, managing director at Britely.

Last year, the Griffin Club, formerly known as the Beverly Hills Country Club in Cheviot Hills, underwent $20 million in upgrades focused on dining, fitness and social offerings. Additions included a second swimming pool, cabanas and a jacuzzi.
The club, which dates to the 1920s, was taken over by Meriwether Cos. in 2015.

“The real benefit of that pool is that it is typically reserved for adults. That ability to separate our adult members from our young families has been a huge hit,” said Graham Culp, a partner at Meriwether.

Swimming was deemed a safe activity early in the pandemic, which made having two pools — and the ability to spread out on the deck — a huge draw for members, Culp said.

During the pandemic, he said, demand was “off historic levels, but we didn’t see a lot of attrition.” In the past few months, however, he has seen interest outpace previous years.

“Some of it is pent-up demand. People were just waiting to make the decision until they could return and use everything, but we’re also a very social club in all we do,” Culp said. “We have a chance to backfill some of those members now and are regaining momentum.”

Even though the state reopened, Culp said members have come to really enjoy some features introduced during the pandemic, like the ability to reserve lap lanes and tennis courts online, services the club will continue to offer.

“It’s a benefit for us to know who is coming to the club and for the members to have that ease that they won’t arrive somewhere, and they won’t have that availability or space,” Culp said.

The club also turned the interior of the dining area into coworking space during the pandemic and is now investing to convert an old banquet room to a coworking space that can turn social when the workday ends.

At Britely, many initial members joined after remote conversations over Zoom. The number of new members signing up started to escalate once they were able to see the interiors designed by Martin Brudnizki Design Studio in person.

“Once December hit and we started talking about having an opening in March and the site was done enough that we could take potential members and show them around, that’s when a lot of interest came,” Lacroix said. “People do like to see what they are getting into and come into the space. That triggered a lot of interest.”

One common trait among many social clubs that recently opened or renovated is that they are targeting a younger clientele.

“These clubs are making changes to appeal to the younger generation,” Peter Belisle, market director for the Southwest region of Jones Lang LaSalle Inc., said.

Rubano added that “everything is geared toward the younger audience now” in both social and country clubs to attract the next generation.

Belisle said that many clubs offer lower price points than social and country clubs of years past, making them more accessible and “not overwhelmingly cumbersome financially,” especially for a younger crowd.

Britely, for example, costs $2,800 a year for a founding member, and there are discounts available for those under the age of 30. Most members so far are between 30 and 55 years of age.

The club’s amenities seem perfectly suited to a younger crowd. In addition to private bars and lounges, club membership also offers access to bowling lanes, live music and a screening area, as well as discounts at Pendry’s spa and hotel rooms.

Belisle added that during the pandemic, many canceled their gym memberships. Social clubs often have fitness offerings and “have a chance to capture that wallet share.”

Jay Luchs, a vice chairman at Newmark Group Inc., said clubs give people “another option or options of places to go that makes people feel at home.”

Plus, he said, the exclusivity is a big part of the appeal. “People are intrigued by exclusivity,” he said. “In some cases, it’s the mystique of being a part of something that is hard to get in. Once you’re in, they all seem to invest well in making them unique and beautiful and a getaway for their clientele.”

But creating a new club in L.A. is no easy feat.

“As someone that’s in real estate, I know that, aside from how great the idea might be, it’s not easy to find size, location, parking per code and a liquor license. There are a lot of things that come into play,” Luchs said.

He added that some of the more desirable L.A submarkets are “almost finished” as far as building is concerned.

Still, Cushman and Wakefield’s Rubano said more clubs are on the way.
Perhaps the buzziest is the Gwyneth Paltrow-backed Arts Club. The British private membership club is planning to open an outpost in West Hollywood on the Sunset Strip.

“There are more slated for L.A., and that is indicative of people believing there is good demand for these more exclusive types of openings,” he said. “Specific to L.A., I think it’s a viable model, and I think you will continue to see viable demand. The model is here to stay.”