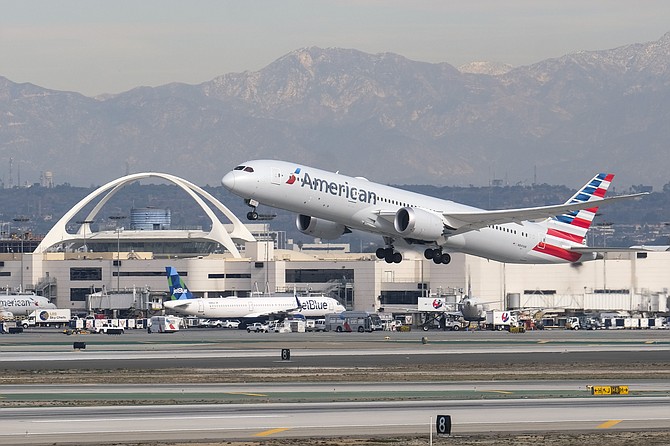 May passenger counts at LAX surpassed half of prepandemic levels for the first time since the pandemic began. Photo by Ringo Chiu.

The rebound in travelers at local airports continued in May, with passenger counts surpassing half of pre-pandemic levels for the first time.

The four airports serving Los Angeles County — Los Angeles International, Ontario International, Hollywood Burbank and Long Beach — saw 4.86 million passengers go through their gates in May, up 31% from April and up nearly six-fold from May of last year.

And while the May 2021 total was down 45.4% from May 2019, it marks the first time since the Covid-19 pandemic began that passenger levels at the four airports have been at least half of pre-pandemic levels, with LAX setting the pace.

“LAX continues to reach new highs for daily passenger traffic that we have not seen since February 2020,” said Justin Erbacci, chief executive of Los Angeles World Airports, the city agency that runs LAX.

Meanwhile, air cargo continues to boom at the four airports, especially at LAX. More than 334,000 tons of air cargo went through the airports, up nearly 12% from last year and up more than 22% from May 2019. LAX cargo tonnage led the way, jumping nearly 31% in May from two years ago.

Airport officials are expressing more confidence that passenger counts — and therefore airport revenue — will continue to edge closer to pre-pandemic levels throughout the summer.

Preliminary June figures from LAX seem to bear this out.

Average passenger boardings recorded through June 28 by the Transportation Security Administration reached a daily average of 76,220, about 58% of the average for the same period in June 2019.

“The progress has continued throughout June, as we set new records for the past year and head into the peak summer travel season strongly positioned to accommodate more people returning to the skies,” Erbacci said.

The TSA screening figures represent a little less than half of the total passenger traffic at LAX, as they don’t include arriving passengers or people transferring to flights and not having to go through security.

The recovery has been even faster at Ontario International Airport. In May, nearly 367,000 passengers went through the gates at the Inland Empire airport, down only 22% from May 2019. The airport serves a significant portion of Los Angeles County, especially in the San Gabriel Valley.

In a June 29 announcement, the airport authority said flight schedules already filed for July indicate the number of departing flights will be at about 88% of July 2019 levels, with seat availability on those flights reaching 90% of the level set two years ago.

Improving passenger counts have prompted airlines to add flights, either by resuming flights dropped when the pandemic hit or starting flights to new destinations.

International travel, while posting significant gains between April and May, still lags. At LAX, international passenger traffic was down nearly 73% in May from May 2019.

With the spread of the delta Covid variant around the globe and several countries reimposing partial lockdowns, international travel’s full recovery remains a long way off.

The tonnage of air cargo moving through the four airports serving Los Angeles County was essentially flat between April and May, notching a 0.9% gain to 334,000 tons.
But that’s still 12% higher than a year ago and 22% higher than the pre-pandemic month of May 2019. LAX has led the way, posting a gain of 3.5% from April and much larger gains of 24% from May of last year and 31% from May 2019.