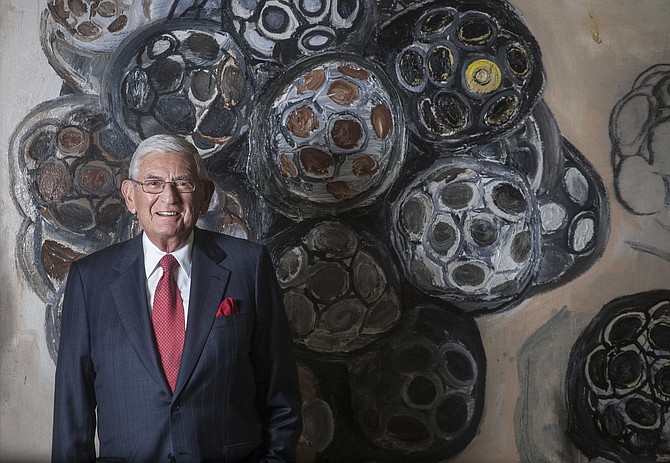 Before Eli Broad turned his attention to civic life in Los Angeles, using his immense fortune to elevate the city’s standing as a cultural mecca, the self-made billionaire built two Fortune 500 companies, starting with $25,000 borrowed from his in-laws.

Broad, who died April 30 at age 87, will be best remembered as a patron of the arts. Inspired by his wife, Edythe, Broad developed an appreciation of art in his mid-40s, and together the couple amassed a collection of contemporary works fit for a museum.

Broad was also evangelistic about reviving downtown’s Grand Avenue, and he married the cause with his devotion to the arts, raising or helping to raise billions of dollars to build what would become beloved institutions and architectural points of pride on Bunker Hill.

Described as energetic and detail-oriented, tenacious and assertive, he injected himself into the inner workings of projects to the degree that he and architect Frank Gehry got into a few spats.

“I may have chaired the Grand Avenue Committee, but Eli threw the elbows and forced results,” said Nelson Rising, co-founder and chairman emeritus of Rising Realty Partners. “Saying that Eli was a tough negotiator is like saying rain is wet — it was more than that. Today’s Bunker Hill and importantly, what it will be a decade from now, is because of Eli’s foresight and grit. I will miss him as a friend. The city will miss his generosity. But nobody will miss sitting across from him during negotiations.”

The Broad’s philanthropic legacy will live on thanks largely to the foundation that he and Edythe established with a $2 billion endowment. The foundation is led by President Gerun Riley, who took over operations after Broad’s retirement from the organization in 2017. Riley said she and Broad worked closely together to develop a succession plan.

“While he did really step away from the day-to-day running and oversight of the foundation and the family office, he still maintained an interest and a curiosity in our work and certainly never lost his commitment to making a difference in the world,” Riley said.

The foundation’s work is possible because of Broad’s success as a businessman.
He ranked No. 6 on the Business Journal’s Wealthiest Angelenos list with a net worth estimated at $7.9 billion in 2020 and started accumulating his fortune at a young age, catering to an American dream of middle-class prosperity that was still very much alive in the postwar era.

Broad worked his way through Michigan State University, where he met his future wife, and graduated in 1954.

Four years later, he co-founded Kaufman and Broad Building Co. with Donald Bruce Kaufman, his wife’s cousin’s husband. They launched the company with $25,000 borrowed from Broad’s in-laws. Their novelty product? Homes without basements, a feature that not only cut costs but would be perfectly suited to balmy Southern California.

KB Home, as it’s named today, began by developing starter homes for baby boomers in the Detroit suburbs. But the company quickly expanded west and in 1963 relocated its headquarters to Los Angeles. By that time, KB Home had already become the first homebuilder to go public with a listing on the New York Stock Exchange.

In 1968, it was erecting single-family homes in nearly three dozen new master-planned communities in or near Chicago, Detroit, Southern California and Northern California, with plans to break ground in the suburbs of Paris.

In the Newhall-Saugus area, one of KB Home’s subdivisions, dubbed Broadview, advertised three- and four-bedroom ranch homes ideal for families. Outfitted with country kitchens, fireplaces, self-cleaning ovens, dishwashers and disposals, the single-family homes were priced from $21,500 to $27,900.

The company distinguished itself from its competitors by steering clear of speculative development, instead acquiring a manageable few hundred acres of land at a time and selling from model homes. “Our profits come from producing homes,” Broad said at the time, “not from appreciation in land values.”

Along the way, KB Home scooped up a half-dozen other home manufacturers.
Kaufman and Broad also made moves to diversify their business, buying a stake in International Cable Corp. of California in 1966 and acquiring Sun Life Insurance Co. of America in 1971.

The all-stock merger, valued at $67.6 million, was seen as a way for the company to cushion itself against the ups and downs of the real estate market.

When the companies merged, Sun Life was a small life insurance business based in Baltimore. Broad transformed it into an annuities juggernaut.

He realized that baby boomers, the same generation KB Home had targeted, were living longer. He deftly predicted that selling annuities and other retirement savings products would be a better business opportunity. The company was renamed SunAmerica in 1989, and Broad was installed as its chairman and chief executive.

Ten years later, American International Group paid $18 billion for SunAmerica. Broad made $3 billion in the deal and stepped down as CEO in 2000.

Broad had already departed KB Home in 1995. The company, including its building and mortgage banking operations, had spun out as a separate publicly held company in 1986. Today, it is headquartered in Westwood with a market cap of $4.8 billion.

In many ways, Broad pulled himself up by the bootstraps, but he also understood he had the privilege of being white and male, Riley said.

“He did recognize that even with all of his hard work and his humble start in life, that he was lucky,” she said. “He truly wanted everyone else to have the same opportunities that he did.”

Broad was also intent on giving back to Los Angeles, the city where he grew his businesses, raised his family and forged friendships.

“I think like so many of us who aren’t from here … the city has a way of growing on you, and it grew on him,” Riley said.

He used the proceeds from the SunAmerica sale to establish the Broad Foundation in 1999. But his penchant for civic life began well before then.

Broad was instrumental in building the Museum of Contemporary Art, which opened in 1979; the Walt Disney Concert Hall, which opened in 2003; and his namesake Broad Museum, which offers free general admission and was an instant hit upon opening in 2015.

His love of art, which began with an interest in drawings by Henri Matisse, Vincent van Gogh and Amedeo Modigliani, extended to architecture, and many of the distinctive institutions he helped bring to life, including the Ramon Cortines School of Visual and Performing Arts, the Broad Contemporary Art Museum at the Los Angeles County Museum of Art, Caltrans headquarters downtown, and his personal residences in Malibu and Brentwood, were designed by some of the industry’s best: Thom Mayne, Gehry, Arata Isozaki, Diller Scofidio and Renfro, Renzo Piano, Richard Meier and Pelli Clarke Pelli.

But the causes to which he and Edythe donated were varied, from gun control to public and charter schools to medicine.

The Broads have invested $43 million in early stage research into inflammatory bowel disease. They donated nearly $80 million to develop and sustain the Eli and Edythe Broad Stem Cell Centers at UCLA, USC and UC San Francisco. And on the East Coast, they gifted some $700 million to establish and fund research at the Eli and Edythe L. Broad Institute of MIT and Harvard.

“All these funding activities have allowed researchers to take the first steps toward a new way of understanding diseases … and eventually develop treatments to improve the lives of patients everywhere,” said Ahmed Enany, president and chief executive of the Southern California Biomedical Council.

Before his death, Broad and his wife had pledged to donate 75% of their wealth. As of last year, they had given away more than $4 billion.

Toward the end of his life, Broad saw the middle-class dream slipping away for many Americans.

“He had really come to be alarmed about the climate crisis, about the state of our democracy, about the opportunities for young people and especially people from marginalized communities to participate in the new economy, and he was concerned about the wealth gap and the increasing divide between the haves and the have-nots …. (and) about the rising cost of health care and housing,” said Riley.

The Broad Foundation will continue to carry out its mission of investing in organizations and initiatives in Los Angeles in the fields of science, education and the arts.

But Riley said it was also Broad’s desire to focus its grantmaking on marginalized communities and on “solutions that will break down systemic barriers when it comes to attaining good education, good jobs and healthy communities.”

Even in retirement, she said, Broad, who would read four newspapers a day, was deeply in touch with the challenges facing Los Angeles.

That’s why, despite all his business successes, Broad’s legacy will be firmly rooted in philanthropy.

“As I look at Eli, it’s a real reminder of the importance of having our corporate executives and our business leaders in the primary community play a key role in the development and well-being of our greater community, and Eli was the poster child for that,” said Lew Horne, division president at CBRE Group Inc., who personally knew Broad and worked with him on fundraising and other efforts to improve Grand Avenue.

“There will be people who forgot how Eli made his fortune,” Horne said, but not his commitment to the arts, education and his surrounding community.

“If that becomes the way the Broad name is honored and carried into the future, that would be very gratifying,” Riley said.

Howard Fine and Hannah Madans contributed to the reporting for this article.