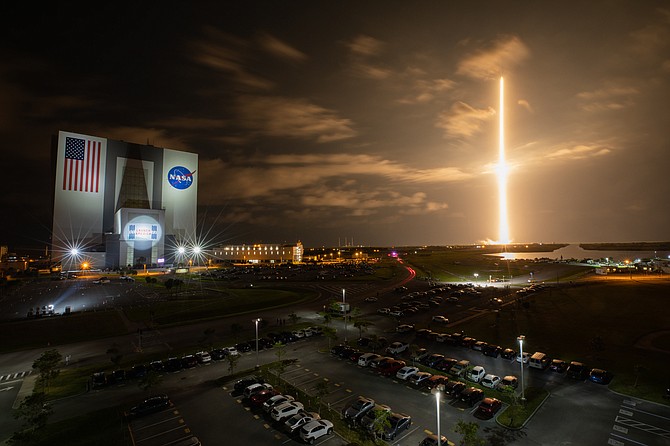 It’s the third time that the Hawthorne-based company has transported humans to the space station and the second official crew rotation mission that the company has undertaken in partnership with NASA.

Last year, the space agency certified SpaceX as the first commercial contractor approved for such missions, and the company completed its first official crew rotation in November. SpaceX is slated to perform at least four further missions with NASA to and from the space station.

Reusing rocket boosters and other parts is something that SpaceX does regularly when deploying satellites, but this is the first time the company has attempted to launch a crewed mission using parts recovered from previous flights.

“This is another important milestone for NASA, SpaceX and our international partners,” NASA Acting Administrator Steve Jurczyk said in a statement.

The capsule launched by SpaceX is expected to arrive at the space station in the early morning of April 24. Aboard are NASA astronauts Shane Kimbrough and Megan McArthur, as well as Japan Aerospace Exploration Agency astronaut Akihiko Hoshide and European Space Agency astronaut Thomas Pesquet.

The launch comes just a week after NASA awarded SpaceX a $2.9 billion contract to develop a lunar landing system for upcoming missions the agency is planning as part of its Artemis program. Key to those missions will be the development of SpaceX’s Starship spacecraft, designed for interplanetary space travel.

“We’re thrilled to be a part of advancing human spaceflight and looking forward to going beyond Earth orbit to the Moon and Mars and helping make humanity a space-faring civilization and a multi-planet species one day,” SpaceX Chief Executive Elon Musk said in a statement.

The company is planning a high-altitude test of its Starship spacecraft in the coming week. All four previous tests have ended in an explosion.