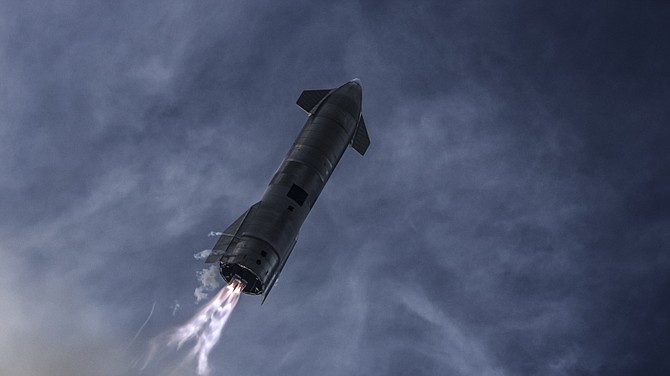 SpaceX proposes using its Starship spacecraft as a lunar lander.

The next astronauts to land on the moon will likely do so in a spacecraft designed by Space Exploration Technologies Corp., NASA announced April 16.

The Hawthorne-based company beat out teams led by Blue Origin and Dynetics Inc. in a bid to develop a lunar lander for the space agency’s Artemis program. Under the $2.89 billion contract awarded by NASA, SpaceX will carry out the program's first demonstration mission, returning humans to the moon for the first time since the Apollo program.

The Artemis initiative aims to land the first woman on the Moon by 2024 in preparation for future missions to Mars.

"I am so excited to partner with SpaceX in this fantastic endeavor for the Artemis suite of missions,” said Lisa Watson-Morgan, human landing system program manager at NASA.

The lunar landing proposal submitted by SpaceX relies on the Starship spacecraft that the company is currently testing at its Boca Chica, Texas, launch pad.

Astronauts participating in the Artemis program will travel to lunar orbit aboard the Orion spacecraft, part of a massive launch vehicle called the Space Launch System. They will then transfer to a planned space station called the Lunar Gateway or directly to the lunar lander, which will be used for travel to and from the surface of the moon.

SpaceX will likely need to refine the Starship design prior to attempting crewed missions. Each high-altitude flight test by the company has ended in an explosion.

“We’re not going to launch humans until we have a successful test,” Watson-Morgan said. “We will be working to make sure that the design and everything we have going forward so far is ready to go.”

SpaceX is also partnering with NASA on the agency’s Commercial Crew program, under which SpaceX’s Falcon 9 rockets and Crew Dragon shuttles have been licensed for use in transporting astronauts to and from the International Space Station.

SpaceX completed its first official crew rotation mission in November and will undertake a second later this month.