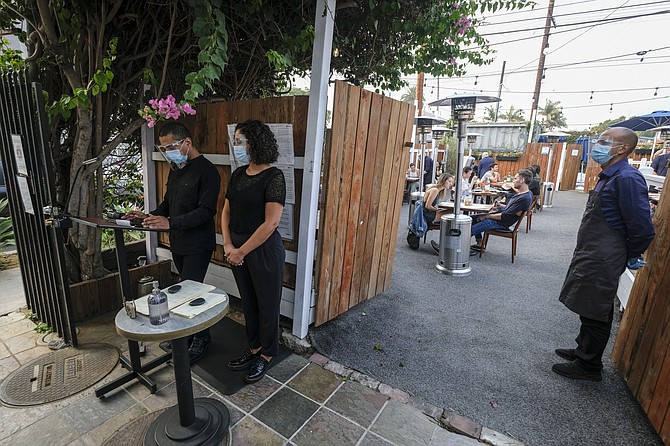 Felix Trattoria is taking the fight to survive to the streets. Photo by Ringo Chiu.

These days, some L.A. neighborhoods look more like a summer street scene in Paris or Rome.

The initiative offers no-cost permits to local eateries to expand outdoor seating into adjacent areas while indoor dining is shuttered during the pandemic.

Although outdoor dining offers an attractive option for customers who may be bored with takeout fare, local restaurateurs say the expensive process of creating or expanding their outdoor dining space has been anything but a picnic.

“Every little bit helps in an industry that’s one of pennies,” said Jot Condie, president and chief executive of the California Restaurant Association, based in Sacramento.

“When you’re running a business with a 3% to 5% profit margin and you are forced to close (indoor dining), if there is an opportunity to serve some customers on the sidewalk every little bit helps. … Unfortunately the way they (restaurant owners) are looking at this is, how can I minimize my losses?” he added.

Even with the extra effort to serve outside, Condie said, the painful reality is that outdoor dining “doesn’t keep the lights on for long.”

The pandemic program was launched May 29 to allow restaurants to offer an alternative to indoor dining, which had been limited by Covid-19.

In late August, L.A. Al Fresco received to the go-ahead to continue through the end of the year.

The August extension added a so-called Phase Two option of applying for permits to put tables on closed-off areas on public streets.

Phase Two of the program has reportedly been put on hold in recent days due to a lack of funding. However, the program continues to approve permits for expanded dining on sidewalks and in parking lots.

With or without the on-street option, however, by the time outdoor dining was able to expand, local restaurants had already been whipsawed by on-again, off-again closures of their indoor dining spaces.

Restaurants and bars were shut down in mid-March when shelter-in-place orders took hold in Los Angeles. Then those establishments scrambled to reopen their indoor spaces for the Memorial Day weekend after a surprise directive from Gov. Gavin Newsom. On July 13, they were ordered to close again due to a post-holiday spike in coronavirus cases.

“It wasn’t like they were just starting back up again. They were almost starting from scratch,” Condie said. “They had to refire up the supply chain. It affected the suppliers and vendors upstream. It was a challenge getting product. They had to redesign their menus.”

Condie added that rehiring workers often leads to as much new paperwork as adding new employees.

Besides the expense of personal protective equipment and extra cleaning, Condie said many restaurants had invested in retrofitting indoor areas for distancing and adding plexiglass dividers between tables or at front desks, only to find the areas closed again soon after.

Not every restaurant is lucky enough to have a parking lot, sidewalk, alley or patio on which to expand, Condie added. And for those establishments that do have access to outdoor spaces, social distance requirements keep them from operating at full capacity.

Nor are hosts and servers used to making sure rebellious patrons wear masks or observe social distancing recommendations. “You are trained in the art of hospitality, and now you also have to play enforcer,” he said.

Still, a number of local restaurants have decided to take their chances on reinventing themselves as outdoor dining establishments. Here’s how it’s working out for some of them.

Location: Fairfax
Established: 2009
Owner & Executive Chef: Michael Simhai
“I’ve got a lot of regulars,” Michael Simhai said of 11-year-old Della Terra. “I’ve got a guy that, every Saturday night, he’s got to have his lobster ravioli, him and his wife. They haven’t missed a Saturday since this whole thing started. He still picks up. He comes in with mask and gloves, but he hasn’t sat at the restaurant.”

It may take a while for thislobster-loving fan to feel comfortable dining out, Simhai said.

Still, Simhai was there for him and other skittish customers because the restaurant had always been set up for pickup and delivery. “I think we were closed for one day,” Simhai said.

He said he also anticipated that the brief opening of L.A. restaurants in late June wasn’t going to last and got started expanding Della Terra’s outdoor space even before the second shutdown occurred.

“I have a friend who said, ‘They’re going to close indoor dining (again).’ I said, ‘OK, what are we going to do?’ I’m going to lose a lot of seats because we only had six or seven tables outdoors, that’s it.”

Simhai did not want to “put people on asphalt out in the street” so he enclosed the parking lot, decorated the space with planters and hired a muralist to complete the look.

“We had four walls, so we got creative,” he said. “One wall is New York City (because) I grew up in New York.” The other walls became recreations of black-and-white movie posters because the restaurant has shown classic movies for patrons on outdoor walls.

During the reopening of the indoor space, Simhai had installed plexiglass dividers between tables. He salvaged the expense by using the dividers outside.

He said the outdoor dining option is hardly a money maker, but “it helps us survive. Without it, I wouldn’t be able to survive. I could survive as a delivery business by letting everybody go and having one person in the kitchen and nobody in the front of the house, but I don’t want to do this. I have employees. Everybody gets paid.”

Location:West Hollywood
Established: 1964
Owner: Sonja Perencevic
Dan Tana’s identity became wedded to the pandemic when the restaurant’s beloved bartender of more than 50 years, Miljenko “Mike” Gotovac, died in June from complications of Covid-19 at age 76. He was thought to be the longest-serving bartender in greater Los Angeles.

The landmark celebrity hangout is located next door to the famed Troubadour nightclub on Santa Monica Boulevard, which launched a GoFundMe campaign in May to avoid going out of business.

Survival has been at top of mind for Dan Tana’s, which has struggled to translate its dark and clubby atmosphere to a new outdoor space.

The restaurant is known for protecting its patrons from the paparazzi as they dine in cozy red leather booths. Owner Sonja Perencevic said booths posed a problem for social distancing when the restaurant briefly opened for indoor dining in June because they can’t be moved around as easily as tables. “We were opening booths crisscross to be six feet apart,” she said.

Dan Tana’s, open only for dinner, had no outdoor dining pre-Covid but was among the first to jump at the chance, opening tables on its outdoor patio in early July.
“This outdoor dining was done overnight,” Perencevic said. “It was a mess. We had to get approval from (Alcoholic Beverage Control). It was a journey to get all the permits.”

Just like indoors, social distancing limits the number of patrons that can be seated outdoors. Parties are limited to six patrons, and larger tables are created by pushing smaller tables together, also limiting the number of available tables.

In terms of ambiance, she said, dinner patrons expect a level of comfort that hurried lunchtime eaters may not require. “They are very different crowds,” Perencevic said.
As part of its determination to maintain its mystique, Dan Tana’s has moved a few of its trademark red booths onto the patio. And as was the case indoors, no photos are allowed.

“This is fine dining,” he said. “We didn’t even have to-go boxes that would house our food. We had flimsy little paper boxes.”

Funke said within 24 hours, Felix got the appropriate cartons and created a menu specifically designed for takeaway, including pizza, meatballs and pasta kits that could be prepared at home without much effort.

Funke said the brief reopening of local restaurants with an allowable 60% capacity enabled Felix to hire back a commensurate level of laid-off employees after two weeks of protocol training. When restaurants shut down again, Funke said, “the train was already moving. We had to keep pressing on.”

The only option was outdoors. “We commandeered the patios of the two dead restaurants next to us, and a little (parking area), and we made it what it is,” he said. “At this point, I am adding landscape architect to my resume. We painted, planted, got heaters and reached out to San Pellegrino to send some umbrellas, and we made it work.”

Funke said outdoor seating for 62 to 64 allows the restaurant to run at about 60% of Felix’s regular indoor capacity and that the restaurant is able to keep afloat at that level.

However, additional costs for staff PPE make the equation less sustainable. And additional time spent serving and cleaning means it takes twice as long to turn tables.
Funke said the next challenge is to decide whether the expense of installing tents or canopies and heaters for the rainy season makes financial sense.

Added Funke, “The pandemic is the great equalizer for everyone from the mom-and-pop Thai shop … to Michelin three-star restaurants. We’re all looking for creative solutions to make revenue. This is absolute war, and we’re taking it to the streets.”

Location: Long Beach
Established: 2019
Owners: Brett Gallo,Erick Verduzco-Vega, Jim Ritson
Kristine Lopshire, general manager of the Bamboo Club, said the period of reopening indoor dining went by in a blur “and we’ve been outside ever since.”

The restaurant and bar was not about to let a pandemic keep customers from enjoying such delicacies as Bamboo Pickled Eggs with boiled peanuts, Bamboo Poke Poke and the obligatory tiki-themed cocktails decorated with orchids or fresh fruit.

“You know, we are just trying to keep it going and have someplace that the community can go and have some sense of normalcy in these crazy times while still being safe and considerate of everything that’s going on,” Lopshire said.

“It’s been a challenge, but we’ve definitely succeeded. It’s just important to be here, so everybody can work,” Lopshire added. “And people need a place to go. They need their drinks.”
Lopshire said the restaurant has always had one patio and put up a tent in the parking lot, complete with a goofy volcano set piece dripping red painted lava.

“I don’t know what we’d do if we didn’t have a parking lot. It’s sort of our saving grace,” she said.

Lopshire said it has been difficult to watch Long Beach landmark restaurants struggle or go out of business during the pandemic because of a lack of outdoor space to use.
She cited Bamboo Club’s Anaheim Street neighbor, Alex’s Bar, as an example. The 20-year-old tavern recently has launched a $20,000 GoFundMe campaign and is one of about 14 Long Beach bars that have formed a coalition to petition local politicians to recognize their plight.

“We’re really fortunate to be here and to be serving the community and giving everyone jobs,” Lopshire said. “But at the same time, we just really are hoping everyone else in the community can make a comeback as well.”