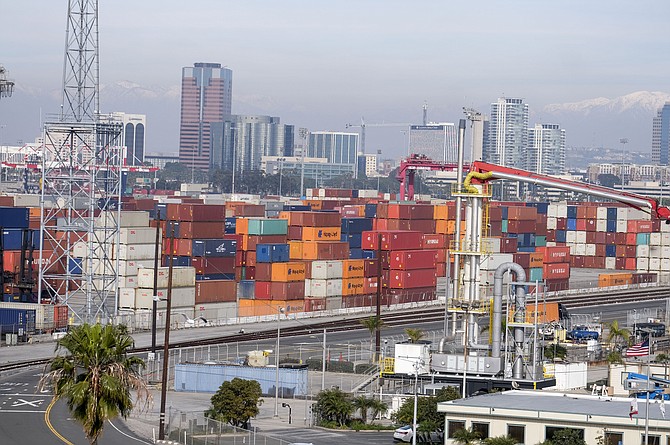 “Given the unique circumstances of a trade war and pandemic, April volumes are better than expected,” Port of Los Angeles Executive Director Gene Seroka said in a statement. “As we move deeper into the remainder of the second quarter, we’re forecasting significantly lower volumes, particularly on the import side.”

Seroka was referring to “blank,” or canceled, sailings announced by cargo operators for the coming months. The port estimates it will miss 15 sailings in May and another 11 in June.

“The voided sailings represent right now about 25% of normal sailings that would be calling Los Angeles at this time of the year, so it’s a substantial number of sailings, and its simply based on lack of demand across the board,” Seroka said, adding that fast fashion has struggled with a 50% drop in business, shipments of steel are down 69.9%, and fruit and scrap metal cargo at the port declined 9.5%.

Cargo volumes from the automobile industry are up 32.3%, which Seroka attributed to new business coming to the port and not an increase of existing cargo traffic.

Meanwhile, April imports were down 20.2% to 253,540 TEUs at the Port of Long Beach, and port officials attributed the drop to a decrease in consumer demand during stay-at-home orders prompted by the Covid-19 pandemic.

“We look forward to a recovery stage and rebounding cargo shipments as the nation contemplates relaxing shelter-in-place orders, people return to work and consumer demand rises — however, it will not be in the short term,” Executive Director Mario Cordero said in a statement. “In the meantime, we continue to collaborate with importers, exporters, terminal operators and labor to develop a recovery plan while ensuring the safe and reliable delivery of goods moving through the Port of Long Beach.”

Demand for labor shifts is “following if not outstripping the loss of cargo,” Seroka said, citing an 18% drop in labor shifts at the San Pedro Bay ports complex. Dockworkers logged 720,323 shifts for the first 20 weeks of this year, compared to 883,032 during the same period in 2019.

“This is extremely impactful to our harbor community,” Seroka said. “The way our outlook is, and what we’ve witnessed thus far in 2020, less cargo means fewer jobs whether it’s our longshore groups, truck drivers, or others who rely on the ports for work. Please remember, one in nine jobs in Southern California, more than 1 million people, in normal times go to work every day with jobs related to ports, so that is another drag on the economy that we see.”

The local chapter of the International Longshore and Warehouse Union, issued a bulletin on April 28 stating that “with the historic drops in cargo volume, due to the coronavirus pandemic, Local 13 and PMA have agreed to temporarily suspend comebacks for Class B IDs to all work other than CL, HL and UTR effective Friday, May 1.”

The move ensures the first preference of employment and dispatch is given to fully registered longshoremen.