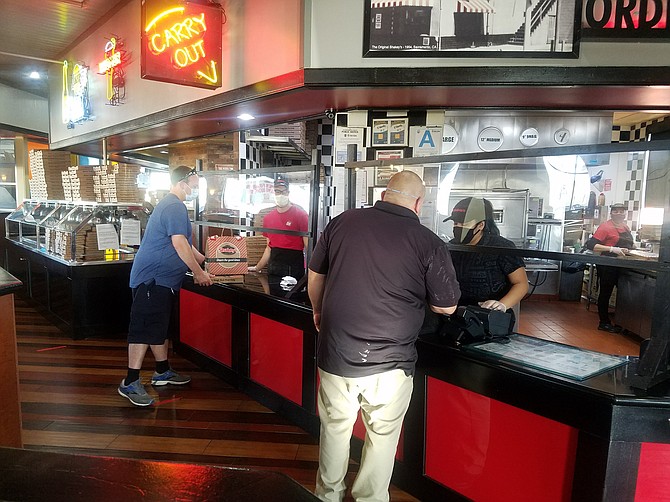 About 80% of Shakey's business comes from phone and pick up orders.

Adem Slipac opened Aroma Café in 2005 to support his family but also to soothe his nostalgia for his native Bosnia.

The West Los Angeles restaurant has since served as a popular gathering spot for people from the Balkans — until Covid-19, that is.

Some customers still stop by but only to pick up freshly baked burek or stock up on groceries from the region that Slipac keeps in the corner of the dining room.

“People were buying flour, soups, chocolates, cookies, coffee, and they didn’t have to stand in line at the grocery store,” he said. “That worked out very well for us, because our revenue was not coming solely from the take-out sales.”

With business down about 40%, Slipac was glad his landlord gave him a break on rent, so he didn’t have to lay off any employees.

“They have to have something to live off of, right?” he said. 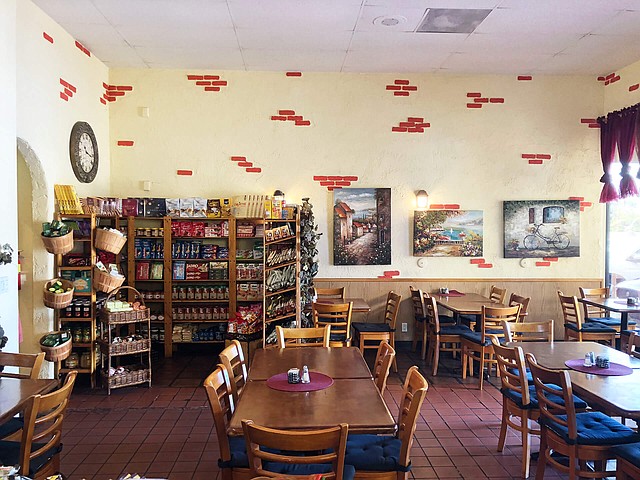 Aroma Café is among some 30,000 restaurants and bars in Los Angeles County that have had to figure out how to stay afloat during pandemic-induced restrictions on social gatherings.

Most had to lay off employees or reduce their work hours while transitioning operations to carry-out and delivery. And as talk of easing restrictions becomes a larger part of national discourse, many are wondering what the new normal will be like.

“We are going to be under some level of alertness, certainly until a vaccine is produced or herd immunity is reached, which is somewhere around 60% of the population or so contracting the virus,” said Nick Mayer, chief executive of the Alhambra-based pizza chain, Shakey’s USA Inc.

“I think we need to be prepared, and it’s not just the restaurants. The retail brick-and-mortar community, which includes every little clothing shop and jewelry store and watch repair shop, will need to be prepared to operate in an environment of heightened awareness of the transmission of disease, and what sort of steps need to be taken to mitigate that will probably be top of mind of for everybody over the next year, at least,” Meyer added.

Shakey’s has about 50 restaurants, half of which are franchises, and about $90 million in systemwide annual revenue, according to Business Journal estimates. The reopening of dine-in operations will likely mean doing away with the pizza chain’s popular Bunch a Lunch buffet, and making sure staff wear face masks and other personal protective equipment.

“The virus is going to be around, and we know from the pandemic of 1918, the first wave was fairly benign, and the really bad killer wave came in the second year,” Meyer said.

For now, he’s focusing on two goals — the short-term one, which is all about “providing some level of employment for as many Angelenos as possible,” and the long-term goal of “exiting out of this with sufficient resources … that will enable us to get back to some level of normalcy and sustainable business operations.”

The chain employs nearly 700 workers on the corporate side and another 350 are employed by the individual restaurant operators.

Some employees quit out of fear of getting infected with the coronavirus; others were furloughed or working on reduced schedules while the “management teams work every single day making sure that the restaurants are running right,” Meyer said.

These days, about 80% of the pizza chain’s business comes from phone-in and pick-up orders. The rest is going out via the third-party delivery, which the chief executive likened to a “Band-Aid on a femoral artery breach,” adding that “the only real way to repair the economy is to get people back to work as soon as possible.”

“Without consumers, none of the businesses are going to be able to survive, and in order for consumers to consume, they have to be employed,” he said. “You can’t just simply continue the (government) stimulus in anticipation of bolstering retail business. … Right now, it’s not looking really good for a large percentage of restaurants. I’ve seen numbers that say 20% of restaurants may never reopen.”

Josh Zad, founder and chief executive of Alfred Inc. tea and coffee houses, predicts “convenience and speed will be key in the world after this.”

In late March, he shuttered all 15 locations in response to the spread of Covid-19. A couple of weeks later, he “shifted to a take-out only policy,” at locations on Melrose, in Studio City and Brentwood, and “slowly but surely we’re reaching our new normal,” Zad wrote in an email to Business Journal.

“We are, of course, bracing ourselves for what it will be like to be a coffee shop in a post-coronavirus world,” he said. “By nature, we are small, intimate spaces that people visit almost daily; you come in, stand in line, order, and hang out for a little bit with friends or with a good book.

“Naturally, a lot of the safety procedures and ramped-up cleaning and distancing protocols will carry over when things return to normal, but we are working on what other new realities will endure when customers reenter our cafes. One thing that will endure, for sure, is our new Alfred app that allows customers to order ahead, get notified when their drink is ready, and just grab their order and go.”

Alfred also introduced a coffee bean subscription service, which is available in weekly, monthly or quarterly intervals; and “Alfred At Home,” a line of DIY kits for making the chain’s popular drinks at home, including Chaga Mushroom Blend and Cold Brew Coffee Box.

Zad, together with former Dodger Adrián González, in 2018 launched Calidad, a Mexican-style lager that’s produced in Santa Barbara. The pandemic has forced them to improvise while expanding its reach, including hosting a virtual Taco Tuesday event, together with actors Frankie Delgado and Mario Lopez.

“We definitely have had to adapt and improvise given that roughly half of our business comes from on-premise consumption, and almost all restaurants and bars are currently shut down,” Zad said. “We have supported those that have remained open in any way we can, helping them get growlers out to customers, including Calidad six-packs with the enchilada take-away dinner, whatever we can do.”

Adem Slipac is counting on the quality of Aroma Café’s food to bring the customers back after government officials greenlight dining in — late restaurant critic Jonathan Gold placed the restaurant’s pljeskavica among the top 10 burgers in Los Angeles for 2013.

“If they let us open next month, we’ll be able to recover, since our food is so unique,” he said.