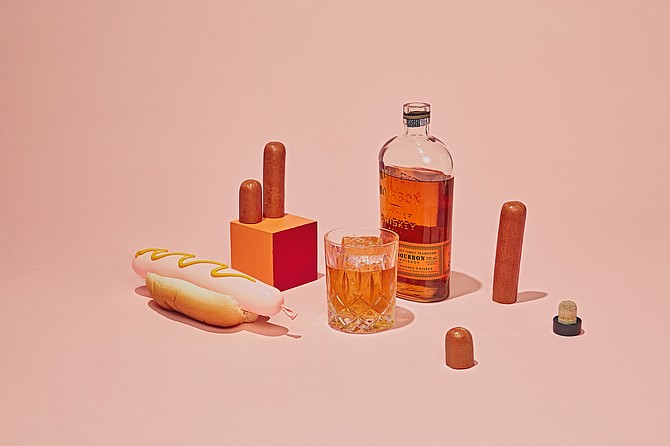 Saucey has seen a surge in orders amid the coronavirus pandemic.

For Saucey Inc. Chief Executive Chris Vaughn and his Beverly Hills-based team, the signs pointing to a spike in demand for their alcohol delivery app came well ahead of March 19.

That’s when Los Angeles Mayor Eric Garcetti made his “Safer at Home” announcement requiring the closure of all nonessential businesses, including bars and restaurants, except for takeout and delivery.

Vaughn, the 32- year-old founder of the mobile delivery app, said the writing was on the wall earlier in March when Covid-19, which is caused by the novel coronavirus, claimed March Madness and the National Basketball Association and National Hockey League seasons, all of which drive out-of-home drinking.

“In the first wave, the closures of … stadiums and sporting events, March Madness canceled,” he added, “you had almost half the distribution points just turn off for this industry.”

The effects were dramatic for Saucey’s business. On the day of the mayor’s press conference and the implementation of Gov. Gavin Newsom’s statewide containment measures, Saucey saw a 300% jump in Los Angeles-area sales.

The company’s sales had surged earlier in the month in San Francisco when that city went into a shelter-in-place lockdown.

Vaughn’s team saw the San Francisco surge as an opportunity to plan to better safeguard couriers and customers. The company implemented enhanced safety measures, including no-contact delivery, no-contact ID scans for proof of age and the elimination of signatures on receipt.

Vaughn said that was part of a collective effort among on-demand delivery services, such as Amazon, InstaCart and DoorDash.

“It’s so surprising to have regulators respond so quickly,” Vaughn said. “You know, they have so many things going on, so much they’re trying to deal with it.

“They recognize that many of these cities and communities are effectively relying on delivery for people to get anything. So, they are being very open with people and across the board you see the government’s reaction to different parts of what’s happening quickly.”

Saucey focuses on wine, beer and spirits sales fulfilled through its courier network by local independent stores. Vaughn estimates single-shop retailers constitute 90% of his platform’s business, and he reports a 500% spike in ice cream sales.

Saucey also recorded a 1,000% increase in its “Essentials” category, he said: snacks, bottled water, condoms and, when available, toilet paper.

Vaughn points to improved delivery times as a silver lining. With fewer drivers on the roads, the average delivery time is down from 34 minutes to 27 minutes.

The average cart size for orders has doubled since the state and city announcements, according to Vaughn, and subsequent days have continued to break sales records for the company in such markets as San Diego, San Francisco, San Jose, Chicago, New York and Dallas.