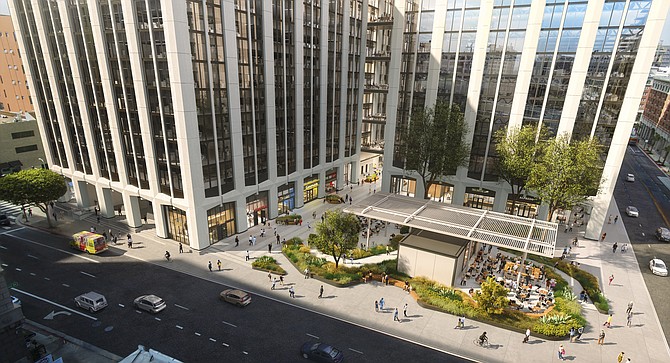 Pasarroyo is undergoing a $50 million renovation.

The office space construction boom in Los Angeles is extending to large properties in Pasadena and downtown.

The property’s downtown-based owner, Coretrust Capital Partners, is working on a $50 million renovation of the space, which it purchased in 2018 for $254 million.

Brookfield Properties, meanwhile, is in the midst of a $170 million remodel of downtown’s iconic California Market Center, also known as CalMart or CMC.

Brookfield announced March 16 that it had completed renovations of one of the complex’s three 13-story buildings. The property also includes a two-story building that once housed a bank. That structure will be removed with the goal of making the site more inviting and creating public space.

The two buildings join a string of properties that are undergoing or have completed overhauls in the area.

During the fourth quarter of 2019, 3.8 million square feet of office space was under construction in Los Angeles, according to data from Jones Lang LaSalle Inc. That includes about 577,000 square feet of large-scale renovations such as conversions.

One of the biggest undertakings has been converting a 60,000-square-foot “concrete slab” into a desirable plaza area for tenants, said Spike Whitney, executive vice president at Coretrust.

Adding shade to the area was a big part of the project, he said, in order to “get people outside.”

Coretrust acquired leases of some of the ground-level spaces, including a Souplantation, to further execute its vision for the space. Whitney said Coretrust will likely introduce two or three restaurants into the space.

The company recently signed coworking company Industrious to two floors at the building. It has also signed a lease deal with luxury brokerage The Agency.

“We were attracted to Industrious and their sense of hospitality,” Whitney said, adding that the company had more mature businesses than other coworking companies, which was good for the building.

Renovations at Pasarroyo are expected to be completed later this year.

“We’re reimagining an office property with a 1980s feel to be attractive and intriguing for today’s workforce,” Whitney said. “We have to serve the needs of our existing customers and attract new talent.”

JLL is handling leases for the property.

Brookfield Properties’ reimagining of the CMC is aimed at creating a mixed-use creative office and fashion campus. It will include a 5,000-square-foot rooftop tenant amenity space and a ground floor with public space and retail.

The remodel is designed by Gensler. It is expected to be completed in 2021.

The Colorado Center in Santa Monica wrapped a $40 million upgrade to its common areas in June, as well.