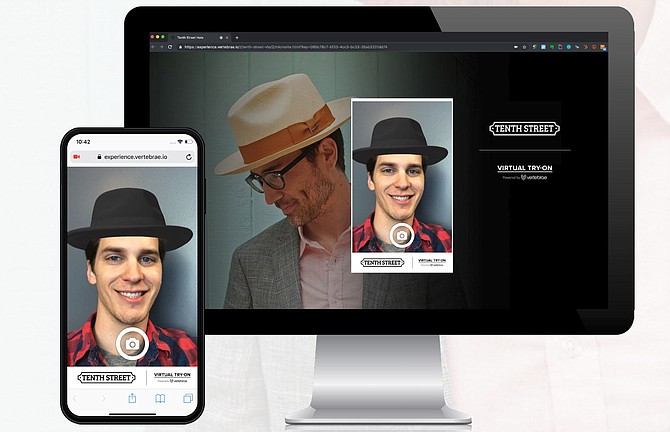 Apparently, even the Covid-19 pandemic has a silver lining.

The quarantine that has fast-tracked ecommerce — it’s expected to increase 18% to $709 billion this year and represent 14.5% of total U.S. retail sales, according to industry researcher eMarketer Inc. — has also been a boon for augmented reality software developers focused on retail.

“We’ve been doing this for a few years, and the technology is really having its moment,” said Vince Cacace, chief executive of Culver City-based Vertebrae Inc., whose augmented reality tool uses data from smartphones’ depth cameras to superimpose products on a shopper’s head or body at a precise scale, eliminating the need for a trip to brick-and-mortar stores to try things on.

“I think with or without Covid, what we offer is just fundamentally a better ecommerce shopping experience … and then you add the Covid stuff into the mix, and it really is just accelerating everything pretty quickly,” Cacace added. “One of the main reasons people’s consideration (for AR) is higher is because they can’t go into a store to try something on, and then also, they definitely don’t want to go to the post office and have to return something. So, they’re more willing to try out a lot of these new capabilities and features on retailers’ websites that may not have been muscle memory to them in the past year.”

Vertebrae, founded in 2015, has 30 employees and a sales and marketing office in Austin, Texas. Cacace declined to provide revenue figures but said the firm has raised $10 million to date and is “growing fast and reinvesting in the business.”

“We’re definitely making money,” he said. “We had a very substantial growth last year, and this year, we’re planning to triple what we did last year.”

The startup “became really good at building augmented reality experiences for them,” Cacace said. But it soon realized that applying its proprietary technology to ecommerce had a much bigger potential.

“Our technology is web-based, which means that you don’t have to download an app to use it,” he said. “If you’re shopping for sunglasses on a website, the last thing that you want to do is go through the friction of clicking a ‘try on’ button, and then it’s saying, ‘Hey, go install this app and come back,’ right? That’s always been a big reason for our success, and our key differentiator of how we’ve been positioned in the market.”

The firm’s AR technology was initially paired with smartphones’ rear-facing cameras, which include depth cameras that use a laser to send out small specks of light and then measure the time it takes for light to bounce off nearby objects and return to a sensor to determine their proximity.

Vertebrae developed AR platforms for Adidas, Toyota Motor Corp., Crate & Barrel, Herschel Supply Co., Facebook Inc., Coach and Microsoft Corp., which can be activated on brands’ own ecommerce websites as well as on websites of its wholesale partners.

With the introduction of smartphones with front-facing cameras that can measure depth, such as Samsung Galaxy 10 Plus and iPhone X, Vertebrae recently pivoted its technology to the selfie side as well.

“We’ve done virtual try-on for a couple years, but why what we are releasing now is so groundbreaking is because now it has accurate scale,” Cacace said. “Before it was close, so you could get a sense of style, but now it’s like you try on sunglasses, and they’re 145 millimeters from edge of frame to edge of frame, and that’s how big they are on your face.”

“We’ve been hearing for years that the one thing our customers really want on our site is a way to try on the sunglasses before they buy them,” Dan Weinsoft, Goodr’s head of digital, said in an email.

“Fit, style, and color are very important to our customers, so we wanted to make sure we’re able to serve them an experience that exceeds their expectations online. … We’re A/B testing the interface, so we’re anxiously waiting for the results to see how well customers are responding to it."