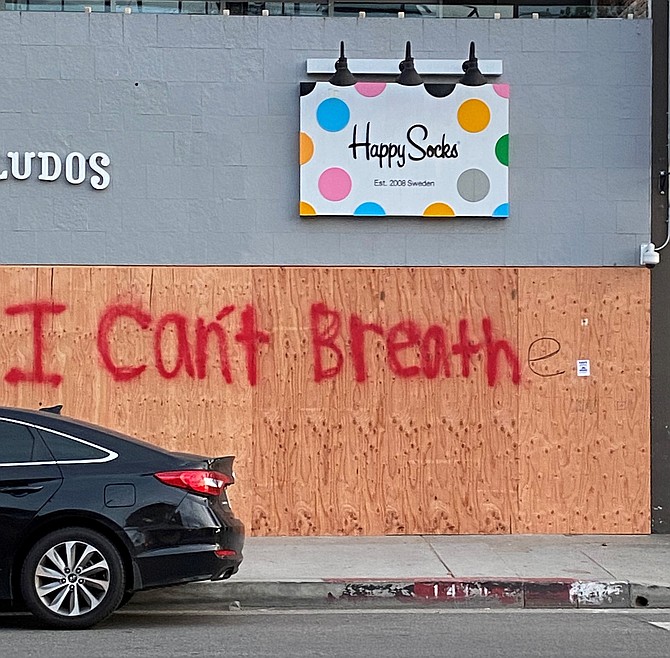 Stores on Abbott Kinney in Venice may pay more for insurance.

While mass protests against police brutality were taking place just blocks away on May 31, two cars pulled up in front of Lana Negrete’s family business, the Santa Monica Music Center.

People jumped out of the vehicles and ran into the store pointing guns and yelling threats at Negrete and her friends. Then they began looting.

“One was throwing things out the window to another who was catching them and putting them in a large container on wheels they brought then dumping them in the cars,” Negrete said. “They were shoving cellos in a car window.”

According to Negrete, an insurance investigator arrived June 4 and said her monthly premiums would likely rise by more than $1,000. Or, he added, “It’s very possible you are going to have to put in ($30,000 worth of) metal gates on your business, and Santa Monica is going to look like downtown.”

Negrete, who co-owns the shop with her father, Chico Fernandez, said she pays herself less than $42,000 a year. After losing 68% of her business to the pandemic, she did not need another hit.

Negrete is not alone. Businesses throughout Los Angeles County will almost certainly face some combination of insurance rate increases, coverage cutbacks and new protective requirements as a result of recent looting, vandalism and virus vulnerabilities, according to insurance industry veterans and observers.

“It could potentially be horrible for local businesses,” said Kevin Klowden, executive director of the Milken Institute’s California Center and Center for Regional Economics.

The possibility of higher insurance costs cuts across the retail spectrum, from Negrete’s family business to Venice’s tony Abbot Kinney Boulevard, where most shops are boarded up and the plywood is often painted with “Black Lives Matter” and images of George Floyd.

On June 5, on what would otherwise have been a monthly “First Friday” event on the street, food trucks gave way to National Guard vehicles, and crowds were replaced by armed troops discreetly deployed in at least one parking lot behind stores. Few businesses were open, and customers were minimal.

“(Businesses) have a tremendous problem already” with the pandemic and previously rising rents, Klowden said. Insurance increases “(are) going to be a real issue for survivability for small businesses unless there’s some … (government) intervention.”

Other local entities stand to suffer as well. Nonprofits, unions and social clubs rent space, pay employees, negotiate contracts and have a host of additional legal matters, all of which carry risks that are typically insured.

Moreover, insurance costs factor into prices that businesses charge consumers, as well as the funds nonprofits can spend on programs.

Julie Davis, an insurance broker who writes about policy pricing, expects commercial property and general liability rates in Los Angeles to jump as much as 20% for policies renewed in 2020.

Not everyone agrees, though.

Insurance attorney David Gauntlett of Irvine-based Gauntlett & Associates, whose L.A. County clients include Aviator Nation Inc. of Huntington Park and Weber Logistics in Santa Fe Springs, said brokers he has spoken with have suggested commercial rates may stay flat or rise no more than 10%. “Fears are overblown,” he said.

Davis and Gauntlett both say California’s elected insurance commissioner, Ricardo Lara, who has broad authority over rate increases by some carriers, is likely to push back against attempts by carriers to impose large increases.

The state department could not be reached for comment.

Many California businesses have been turning to so-called “unadmitted” insurers for lower prices and more coverage flexibility, Davis said. The drawback is that the state will not pay policyholders’ claims and premium remunerations should one of these carriers become insolvent, as it does with carriers that have been admitted to a state backstop program in exchange for stricter regulation.

The Business Journal reached out to several locally based insurance carriers for this story, but they either declined to be interviewed or did not respond to requests for comment.

One former top industry executive who spoke on condition of anonymity said he expects insurers will impose significant rate increases across the board for two reasons.

Davis, however, expects insurers to take into account factors such as a company’s location and loss history when setting new rates.

There’s widespread agreement that businesses will be facing some combination of price increases, additional coverage exclusions and greater compliance requirements.

“I’ve definitely seen the coverages being restricted and gutted,” Davis said, adding that companies likely to be most affected will be those considered more at risk after the pandemic and the looting.

That includes retail, real estate, hospitality, health care and food manufacturing businesses, as well as those in geographic areas that have been hit hardest by Covid-19 lockdowns, looting and vandalism.

Rates are also expected to rise for companies based on geographic proximity to natural disasters, such as L.A.-area wildfires, she said.

“You can rest assured that coverage for a risk in downtown L.A. is not going to be cheap for riot and civil commotion,” Davis said.

But, paradoxically, companies that have dramatically shrunk in size due to rapid loss of business during the pandemic should not expect their premiums to go down commensurately, Davis said. Insurers will seek to keep collecting about the same amount of money by raising rates for those companies, she explained.

Rates might also rise as some carriers seek to compensate for the poor performance of their investments, she added. Insurance companies’ profits depend heavily on returns from investing collected premiums.

To be sure, not all industry veterans predict huge carrier losses that would lead to large premium increases. Most businesses did not specifically buy pandemic coverage, even though it was available before Covid-19, said Steve Brower of Laguna Hills-based Brower Law Group, who provides insurance legal services to L.A. County clients such as the Screen Actors Guild and the CalPortland Co. cement company in Glendora.

The pandemic insurance product was available following the SARS epidemic, Brower said, but few bought it because it was relatively expensive.

Brower and other attorneys said it’s not clear that businesses will prevail in the hundreds of lawsuits they’ve filed around the country seeking to recover for Covid-related losses by claiming those losses fall under their business interruption coverage.

“I don’t think many companies will see coverage for coronavirus business interruption,” Brower said. “I hope I’m wrong and that all my clients get money. But I think that’s the less likely outcome because the policies are written for physical damage,” and losses due to government orders.

“A lot of the (pandemic) business loss is because the customers won’t come,” he added. “If you’re a caterer, and your kitchen burns down, they might get you a new kitchen. But here, there’s no bar mitzvah. There’s no quinceañera.”

The Santa Monica Music Center’s Negrete said the heart of her pandemic losses have been from an evaporation of group lessons and plummeting rentals to local school orchestras. Schools, whose budgets have been cut in the pandemic’s wake, have been turning to cheaper online rentals, she said.

There are steps businesses can take to be better prepared for the possibility of insurance rate hikes, increased coverage exclusions and greater compliance demands.

Davis and the attorneys agreed that owners should start planning for ways to limit their costs at least four months before a current policy expires.

That planning will need to account for what metal storefront gates will do to business fortunes, Negrete said.

“It changes the psychological feel of safety. How does that affect the consumer? We do lessons at 8 o’clock at night. Are parents going to feel safe letting their kids out where the stores are covered with metal grates?” she asked. “So, in a year from now, when everyone’s rewriting those policies, that’s what we’re going to have to be thinking about.”