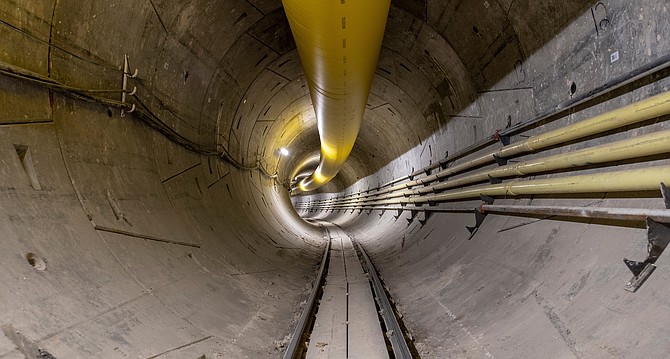 While the world’s eyes have recently been focused on the first manned space launch by Elon Musk’s Hawthorne-based Space Exploration Technologies Corp., another Musk company has been making some news of its own.

This is the 4-year-old excavation company’s first construction project, beyond a 1-mile test tunnel completed 18 months ago next to its headquarters.

The authority’s board on June 3 approved an initial study of the proposal, setting aside other airport rail link alternatives, including a $1.5 billion light rail extension of the Gold Line from Pomona. The study is expected to be completed later this year.

“This is the technology of the future, and it could end up costing just 5% of what it costs to build on the surface,” said San Bernardino County Supervisor Curt Hagman, who also sits on the transit authority’s board.

Boring Co. did not respond to a request for comment for this story.

The company raised $120 million in July from several venture capital firms, including Los Altos-based Future Ventures, which was co-founded by noted Silicon Valley venture capitalist Steve Jurvetson. At the time, a Boring Co. spokesman reportedly said the company had a valuation of roughly $920 million.

His idea was to a build tunnel network that could take commuters under street-level traffic jams. Drivers would ease their cars onto lifts, which would lower them 40 feet into the tunnels.

In the tunnels, the cars would be placed on mobile platforms — which Musk called skates — that would use magnetic technology to whisk them along at up to 150 miles per hour to their destinations where lifts would take the cars back to the surface.

But Musk was forced to put that idea aside in 2018 after a tunnel he proposed along the 405 freeway ran into opposition from Westside residents.

Instead, Boring Co. has focused on building underground people mover systems that will shuttle small groups of passengers between fixed points, such as train stations, airports and event centers.

Boring Co. pitched two proposals during the summer of 2018. One was made to the Los Angeles County Metropolitan Transportation Authority for a 3.6-mile tunnel loop to connect Dodger Stadium to a nearby Metro Red Line subway station. The company said it would finance the project, which it dubbed the Dugout Loop.

That project is now under review by the city of Los Angeles’ Bureau of Engineering. According to a statement from the bureau last week, Boring Co. and the bureau are still preparing the project’s environmental impact report, with a target of releasing the document this fall. The report could come before the City Council several months after that.

A series of high-speed mobile platform “skates” would speed passengers to the airport in 12 minutes. Boring Co. made the proposal to then-Chicago Mayor Rahm Emanuel, who became a champion for the project.

But before the project could gain traction through the city’s complex approval process, Emmanuel’s term ended and his successor, Lori Lightfoot, halted the project, expressing doubts about the unproven technology and the cost.

At about the same time, Boring Co. bid on a much smaller project: a people mover tunnel loop connecting various halls of the Las Vegas Convention Center’s 200-acre campus. The center itself is in the midst of a $1.5 billion expansion.

Boring Co. won the contract in May 2019 to build a pair of tunnels, each about 0.8-mile long, and then bring in vehicles to function as the people mover. Work started on the tunnels — the main portion of the $52.5 million project — in November. 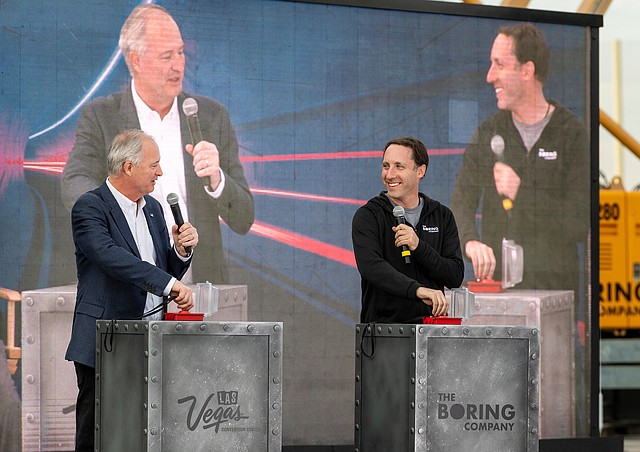 “Less than one year ago, this project was just an idea on paper; today, we’re ready to begin tunneling,” Boring Co. President Steve Davis said in the November announcement that kicked off the project. “Thanks to our partners at the Las Vegas Convention and Visitors Authority for the opportunity to build our first commercial project here.”

Boring Co. completed both tunnels in six months, continuing the work in spite of the Covid-19 pandemic that brought the rest of Las Vegas to a virtual standstill.

One reason Boring Co. was able to finish in such a short period of time is its breakthrough in tunneling technology, according to San Bernardino County Supervisor Hagman, who toured Boring Co.’s headquarters earlier this year.

“Their digging machine is the invention here,” Hagman said. “Their new boring device digs the hole and puts down the concrete all at the same time as the machine moves forward along the route. This takes much less time than conventional tunneling and also reduces the need for workers.”

With the tunneling now complete, Boring is turning its attention to the people mover vehicles. The company has veered away from its original magnetic-powered skate concept. Instead, it plans to use vehicles from Musk’s other major company, Palo Alto-based Tesla Inc.

According to a fact sheet put out by the Las Vegas Convention and Visitors Authority, which is funding the project, Boring Co. plans to bring in up to 62 Tesla vehicles of varying sizes to carry between three and 16 passengers at a time.

The Tesla vehicles will have the capability of reaching speeds of up to 150 miles per hour, the fact sheet said. But, because of the 0.8-mile length of each tunnel, the vehicles will be limited to a top speed of 40 miles per hour. Still, the people movers will allow convention center attendees to move between halls in less than two minutes; it currently takes about 20 minutes to traverse the distances on foot.

The entire people mover project is set for completion in January, though whether it will see full use at that time will depend on whether physical distancing requirements for the Covid-19 pandemic remain in place. In March, Nevada Gov. Steve Sisolak ordered all casinos shuttered and banned conventions and other mass gatherings. Casinos have since been allowed to reopen on a limited basis, but conventions remain banned.

Boring Co.’s latest proposal for a transit link to Ontario International Airport has come as San Bernardino County officials have grown increasingly frustrated with delays in getting a more traditional rail link to the airport established.

The original rail link plan was for the Foothill Gold Line through the eastern San Gabriel Valley to continue on to the airport. The final six miles from Montclair would cost more than $1 billion and would be paid for by San Bernardino County.

But 18 months ago, amid rising construction costs, the Foothill Gold Line Construction Authority was forced to scale back the Gold Line project, ending the current construction phase at Pomona instead of Montclair.

Additional funding must be obtained to continue the project to Montclair. That means any rail link to Ontario International Airport has now become even more expensive and distant.

“It’s now becoming apparent that if we wait for the Gold Line to extend out to the airport, we’re talking at least one and possibly two decades out — maybe in time for my children to use it,” San Bernardino County Supervisor Hagman said. “Not to mention the tremendous cost of at least $1.5 billion.

“We need something here and now, and that’s why we need to explore this Boring Co. tunnel alternative,” he said. “Boring can build the tunnels in less than a year, and the whole thing could be operational in less than five years.”

Hagman has been championing Boring Co.’s technology and, after his facility tour, encouraged the company to make the proposal to the transit authority.

The company’s plan calls for a 2.8-mile tunnel from a point close to the Metrolink Rancho Cucamonga station to Terminal 2 at Ontario International Airport. Boring Co.’s submission to the county’s transportation agency called for specially designed Tesla vehicles.

But Hagman said he has had discussions with Boring Co.’s Davis about developing a separate shuttle van that could seat up to 12 people at a time; these electric vans would have rubber wheels and could reach speeds of 120 miles per hour, meaning the entire 2.8-mile trip could take just two or three minutes.

“It could be a caravan of vans capable of shuttling up to 1,200 people per hour,” he said.